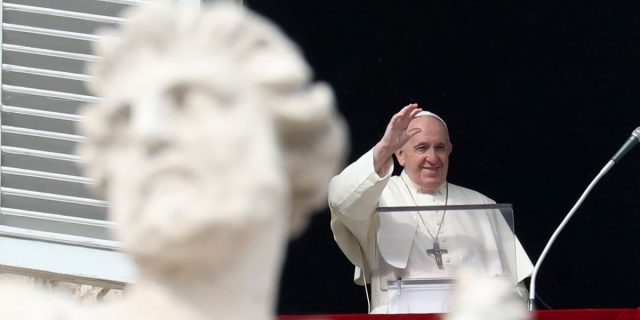 The CEOs of Bank of America, BP, Johnson & Johnson, Salesforce, and several other Fortune 500 companies are joining the Council for Inclusive Capitalism With the Vatican, a new business organization affiliated with the Catholic Church and operating under “the moral guidance of Pope Francis.” Fortune is a media partner to the council, which also includes policymakers and the general secretary of the International Trade Union Confederation, and which launched on Tuesday.

“An economic system that is fair, trustworthy, and capable of addressing the most profound challenges facing humanity and our planet is urgently needed,” Pope Francis said in a press release, adding that the companies and business leaders on the council “have taken up the challenge by seeking ways to make capitalism become a more inclusive instrument for integral human well-being.”

The council, which says its goal is “to build a fairer, more inclusive, and sustainable economic foundation for the world,” is the latest effort by Big Business to rethink capitalism and its effects on stakeholders, not just shareholders. “The dialogue has changed dramatically around these types of things,” Bank of America CEO Brian Moynihan, one of the council’s “Guardian” leaders, tells Fortune.

The 28 companies and organizations that have joined the Council have made specific pledges to enact its four guiding principles: equality of opportunity for all people; equitable outcomes; fairness across generations; and fairness to those in society whose circumstances prevent them from full participation in the economy. Bank of America, for example, has pledged to disclose the greenhouse gas emissions it finances by 2023, and within the same time frame to hire and provide skills training to 10,000 people from low- and moderate-income neighborhoods. (Those commitments predate the council’s launch, but Moynihan says they are “informed by what inclusiveness means here as well as…from other groups we work with.”)

“Doing this is not simply a market imperative. It’s not simply chasing the ESG dollar,” Lynn Forester de Rothschild, founder of the council and managing partner of Inclusive Capital Partners, told Fortune in a separate interview Monday. “The capital markets are such a powerful force, that we need to remember that our actions, who we are and what we are, are based on morality and ethics. And so the Holy Father really asks us to put profits in service of planet and people.”

The council developed out of a global forum at the Vatican in 2016, organized by Fortune and Time, and a convocation of business leaders there to meet with Pope Francis.

“Our great challenge is to respond to global levels of injustice by promoting a local and even personal sense of responsibility so that no one is excluded from participating in society,” the Pope told attendees at that meeting. “I encourage you to…seek ever more creative ways to transform our institutions and economic structures so that they may be able to respond to the needs of our day and be in service of the human person, especially those marginalized and discarded.”

Four years later, de Rothschild acknowledges that the council’s current and prospective members still have a lot of work ahead. “At next year’s meeting, we will measure, we will self-report on how we have done toward our commitments,” she says.

She acknowledges that some companies “might decide they don’t want to try, and they might rotate off” the council, but she’s also keeping the faith. “What we’ve already established among ourselves is the Christian idea of redemption,” she says. “We’re going to fail. But that’s no reason for not trying.”