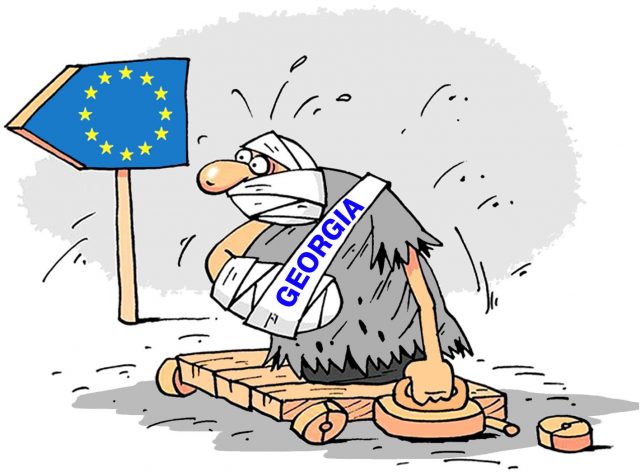 Do you remember the second visit of the European Council President Charles Michel’s envoy  Christian Danielson to Georgia? When  during the first visit he failed to make  the Georgian politicians to heed something, during the second visit he brought a document prepared and directly told the opposition and position: you shall sign this unconditionally, the document is agreed in Europe. The Georgian political elite also read for the first time in Tbilisi the agenda on which they and, consequently, the whole country should live for the next four years.

However,  the West tries to prove and the  Georgian politicians fail to  agree, but they really have agreed  on one very important thing – no one liked the document brought by Danielson. Both the government and the opposition returned a negative to Europe: it won’t do, you have decided wrongly for  us. This was the first time that the Georgian political spectrum unanimously said no to the “strategic partner” Europe. It was so unexpected that before Europe became anxious and angry, a lot of time hadpassed, Georgian politicians thought, disobeyed and craned their necks  (in the literary meaning of this word). Well, the “strategic partner” and “historical friend” realized that Georgia was slipping from its hands, the country started  an independent political game, and…suddenly the chairman of the Georgian Dream, IrakliKobakhidze, who had  never mentioned  that he had planned  a visit to the United States left  for the USA. However, even if there is no pandemic, even under normal conditions, such visits are usually agreed at least six months in advance, and, oh, surprisingly, Kobakhidze went to America out-of-schedule.

At such times the Russians used to say, “he was called  on the carpet”. Why Russians? Because, in the end, it turned out that the country that is most criticized by Georgian politicians does not interfere in our domestic affairs at all and calmly watches how the West has fun performing  experiments on Georgian politicians. The experiment is when one day you say categorically that you will not do it and the next day, after calling from Europe, you come out like a child without a pampers and you agree to everything. Less than a day after Kobakhidze’s visit to the United States, ArchilTalakvadze, theSpeaker of the Georgian Parliament… no, of the powerful and principled Parliament, came out and solemnly said: “We are ready to sign the document submitted by Danielson unilaterally and now it’s the turn of the opposition.”This is the same Talakvadze, who did not like Danielson’s document, especially the clause according to which five of the 16 parliamentary committees should be chaired by the opposition – how could he explain to the members of his team that they should  leave their posts? Now, without explanation, after signing the document, he will have to perform  theclause provided  there and force five teammates to resign. The fact that no one asks the chairpersons of those five committees anything is easy to understand. They were sacrificed as  pawns to the bishops  on the chessboard – nothing to say about  the kings and queens. In addition, the document detailed this topic. Two out of five chairs in  the following committees – Procedural and Rules, Legal, Human Rights and Civil Integration, Budget and Finance, and Foreign Affairs,  should be chosen by the opposition. Obviously, there are those five committees where any interrupted or delayed work  automatically means the suspension of the parliament, and why anybody  thinks that the opposition will not try to organize sabotage from the post of the committee chairman? Does anybody believe they love the country so much, that they will not dare this…

Let’s talk about the opposition first and then about slavery. Just  the opposition met Danielson with fanfares, but they could not find out any clause in the document, which clearly stated that the government should call early elections. The opposition was convinced that Europe would seize power from the Georgian Dream, place it on a gilded plate, and hand it over to  the opposition in a pergola.

Well, as the opposition did not hope to win the elections, so it was  trying to  get rid of the Georgian Dream by means of  the West, but the West postponed the “release”  for 4 years and the opposition did not like it. However, four years is just such a long period  that… now the ball is in the opposition’s court and the West has to show, in general, whether  it  can only “suppress” the government or enslave the opposition at the drop of the hat? However, the leader of the separated “Girchi”ZurabJaparidze clearly stated that signing the document means declaring capitulation. It turns out that if the opposition enters the parliament, takes over five committees, changes the election code, reviews  the judiciary system and remakes it, it is  a capitulation. The opposition wants either everything or nothing.

As a result of pressure from the West theopposition or government leaders have changed times out of number their positions radically in the past year. It is difficult when you have so much power, when the whole country is under your feet and at this time someone comes or calls you and tells you that you have to live according to their  agenda. Therefore, as it is written in “Data Tutashkhia” – “shit happens” – this is how Georgian politicians justify themselves and then step on their own principles, self-esteem, morals and say what the West is forcing them to say. Just is forcing, otherwise how can one  say one thing one day and the opposite the next?But if they do not betray all this, they might be turned around and lose the welfare  that came out of the blue in their waiting hands. Exactly out of the blue, because in 2012 the National Movement’s power was changed by one man and that one man is no longer visible at all, he has washed his hands and lives in peace, while his legacy…

During their rallies the opposition activists often chanted “slaves, slaves”, mostly to the law enforcement officers. However, those activists should know best that their leaders are the classic example of slavery; the leaders who run headlong at one call from an ambassador of any European country and listen to their instructions; the  leaders who listen to the American ambassador, Kelly Degnan  stamping feet and banging fists  with their heads  down and cannot return the word.

After meeting with the ambassadors, a number of   politicians who had left  their residences said: “We were drinking coffee, eating cakes, we almost did not talk”,  and in this case they do not lie. They do not speak there, no one let them speak, they receive instructions on how to live by themselves and how to make live the  people. Any question is considered as disobedience, the disobedient persons are removed from the political field, and nobody wants to be removed, because no one has yet invented a more profitable business than politics in Georgia yet.

Kobakhidzehas made  the Speaker of the Parliament to sign the document with one phone call and when he arrives, the rest will follow this. We think that his teammates  will listen to Kobakhidze in much the same way as the team footballers were listening to the newspaper item that was read to them, in Nana Mchedlidze’s film “The First Robin” – with open mouth, surprised and happy…

It’s not a  laughing manner, the fact is  that Kobakhidze shook hands with the American congressmen and this should be associated with a  touch of political sacredness  for the representatives of the government and the opposition.

In such a situation it is difficult to hope for something and believe in the future, when some  congressman, some Danielson, some Michelle and someone else (everyone is someone who interferes in the internal affairs of Georgia so rudely) treats Georgian politicians like little children, push them, make them reject their principles, force them to make incomprehensible decisions for the future of the country… And it is a fact that the life on the orders  ofthe western politicians has brought us so far. We have nothing of our own, even the thinking , and we get the promises only.

“We have  one foot in NATO and the other –  behind us…” So we are in all directions, one foot forward and the other back. However, the sprawled politicians can easily find accessible places and do not trust them, while they  do not trust us, ordinary people, and so we have been living for years, just for 30 years now.

It did not matter whether the opposition signs the Danielson’s document, the West has already proved that it holds  Georgia firmly in its hands and is  not going to let it out alive.