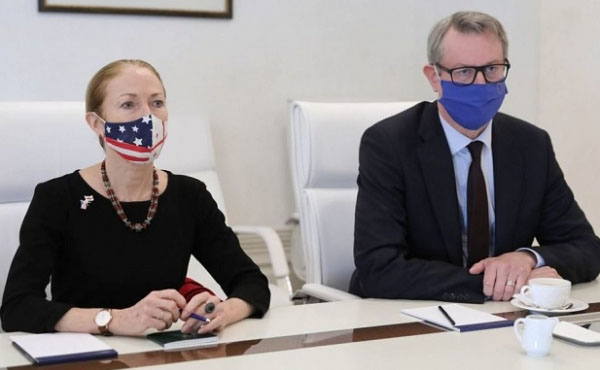 Let’s start with the fact that neither the MEPs, nor the US, nor, in general, the ambassadors of any other country are asked what changes will be made in the Georgian legislation. For example, in the same United States, specifically in the state of Georgia (Georgia was not chosen by chance), the ritual of “licking the fingering” is not voluntary, but mandatory. According to the Civil Code issued in 1961, it is illegal to eat fried chicken with a fork, knife or any other means except fingers. In 2009, one of the tourists was detained for a while because of this violation. Does Ms. Kelly think this (and not only that, America is full of weird laws) rule is very much liked by everyone or would she be a tourist happy with the arrest? And if any Georgian parliamentarian comes out now and calls on America – it is a shame, how can you have this law, you should change it – do you understand what will happen? Of course, he will end his political career as a parliamentarian, but congressmen will send numerous letter asking how he dared to interfere in their internal affairs. And they will be right, anyone can lick what they want, but do you realize that they themselves interfere in our affairs and perceive all this as a normal event? Can you see that Georgian politicians are already accustomed to the fact that they have to agree on anything with the West and have to get their permission for any change ?! The US ambassador even dared to call on the president to veto the law. Fortunately, Ms. Salome did not obey her. Fortunately, because it is already a matter of principle to decide something independently. We have not overcome yet the fact that under pressure from the West, a 43% threshold had been set for the ruling team and the likelihood of early parliamentary elections had risen. This is disrespect for the will of the electorate. If not, then we should officially write in the Electoral Code: If the winning party after the parliamentary elections fails to overcome the 43% threshold in the next self-government elections, new parliamentary elections will be held. The West did not succeed in changing the government, they cannot cope with this and they also understood that the so-called opposition does not have the support of the population, therefore, they thought of this insidious (yes, insidious) plan. We suspect that if the Georgian Dream gets more than 43% of the votes, the West will not recognize it and will accuse it of fraud. The aim of the “Friends of Georgia” is to change the government and they are doing everything for that.

Let’s go back to the changes in the Administrative Code. The law has been tightened on administrative offenses, and that makes sense. The opposition gave itself the right to do everything: it violated the regulations, the curfew, and no one was punished for that. When people got bored of sitting at home, they would take to the streets, be rude to the law enforcers and “justify” everything in the name of the opposition. Thus, these changes will be a kind of brake for them, because against the background of increased fines they will think a little and there will be more order.

But the West is least interested in order in Georgia right now. “Our friends” will do their best to radically escalate the situation before the elections, and the opposition, which is a wordless executor of their instructions, will somehow come to power.

At first glance, the current government is silently following the instructions of the West, except for one – the current government is trying to avoid an armed conflict with Russia as much as possible. Several times the opposition tried to force the government to start a war, there were also some provocations, when activists put down their pants at the border, when bad language was used against Russian President in live broadcast. More precisely, the bad language was  used against the dead, which logically should have had a very bad consequence, but, fortunately, no one on an official level perceived seriously the provocative appearance of a particular journalist…

By the decision of the same West, Zhorika Rurua was released from prison, and the bail against Nika Melia was paid by the European Union. Let’s talk about Rurua first. The status of a political prisoner was given to Rurua by the opposition and a specific television in a way that no one could deprive him of that status. However, Tamar Toradze is shouting from America, that this man killed her family members, but the Americans do not hear what is being said in America and what would they hear in Europe ?! There is also a video of a specific woman in the social network who says: I am afraid of death if Rurua is released from prison. Almost half of Tbilisi talks about Rurua’s “heroic deeds”; They say he is a murderer, but the West does not understand this and only understands that Rurua turns out to be a political prisoner. Zhorika is no better than an ordinary thief serving a sentence. If he comes out, then those charged with lesser crimes should also be released and more than half of the prisons emptied, but no _ the West is behind Zhorika!

Nika Melia, who committed hooliganism in the live broadcast, did so much, that the bail was paid by the European Union. We saw his hooliganism live and nevertheless, he was practically justified. But I know people who quarreled in the street to protect their dignity and were imprisoned for 3-4 years.

“There will be no justice – there will be no peace!” The West knows this very well and that is why they are doing everything to make the majority of the population feel unfair. This is also a tactic – if the opposition does not have the necessary number of supporters, then the government should be deprived of the supporters and take steps that their supporters do not like. We doubt that the majority of the Georgian population will consider the freedom of Rurua and Melia as a fair decision, and this is pouring water on the mill of the opposition.

We are facing elections in which the West has set a percentage in advance – there will be no 43% plus one vote and there will be early parliamentary elections, which means the automatic transfer of power. We will repeat: we have serious doubts that the West will not recognize the elections in case of a positive result for the “Georgian Dream” and will do everything possible to hold early parliamentary elections next spring, to bring to power a people who will wield a gun and even shoot it at the first instruction. And we…

If this continues, even the diet and digestion mode will be imposed on Georgian politicians, and if anyone wants to go to the toilet earlier, they will have to be patient to follow the will of the West. It may seem ridiculous, but we are very close to it and, most importantly, in exchange for power, many politicians will agree to such a development of situation.