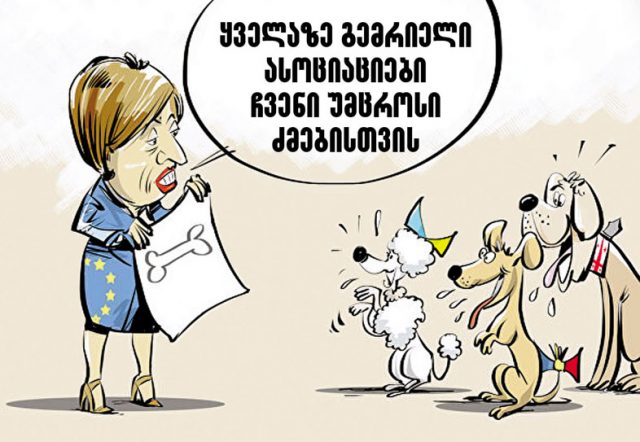 I knew beforehand that our transatlantic “friends”when the time was due, would disclose  their true intentions, or, as they say, would self-lustrate. Let your  every good intention come true as my guess has come true! I was not alone to think so. Many of our talented analysts, publicists and experts have repeatedly made similar assumptions. It is also natural: who can  believe that someone thousands of miles away would think and take care of you while its nearest  neighbor  is in distress? A sane man should think that something else lies in such selfless “care” of theremote neighbor.

For three decades now, politicians in the United States, NATO, and the European Union have been voicing their grievances over real or illusory challenges  facing Georgian statehood and constantly “fighting” for  establishing in our country a true, European democracy based on the rule of lawand civil consciousness. Some of our compatriots even believed it and still believe it, but…

The party, known for its succeeded or failed attempts to provoke and destabilize, recently has launched a new provocation aimed at imprisoning their chairman. Why, would you ask?  Only for the reason that this ratingless party needs a hero who will have the image of a tortured knight. I have no idea how this new  “leader” of “Nat-mov” can be turned  into a hero and a tortured knight, because no one has ever heard any clear political thought or word expressed by he.

As the late Sayat-Novaused to  say: “A pumpkin will not become a Shiraz lamp, even if you put it up on a cupboard”. Yes,  the man said so, but did anyone hear? You will not believe it, but the “Nat-mov” activists called that future “tortured knight” the Holy Grail! (So ​​what, if they know nothing about the Holy Grail). The new leader of this ratingless party or gang has committed a criminal offense: he broke the law and got over  the state. Our liberal government released him on bail, putting only a police bracelet on his wrist. The leader of that “party”ostentatiously  removed this police control bracelet at one of the protest rallies and threw it in the crowd, i.e. threw it  in the face of  the state.

Our “kind” government has again imposed bail for this criminal offense and set a payment deadline. After the expiration of the term, the court sentenced the offender to imprisonment. That’s when the lustration of our “strategic partners” began, and at the same time it was not only obvious, but blatant. Do you know why it as blatant? Selfless  defenders of Georgian “democracy” and “statehood” call the arrest of the leader of the “major” opposition party (or gang) a step backwards on the path to democracy and European integration (!), while in the countries well integrated in NATO and the European Union – France and Spain – they have sentenced the ex-president to prison in one country  and in the other  country, nine ministers have been jailed for more than a year. EU  and NATO high ranking officials and the US ambassador have not yet expressed their outrage. Well, highranking officials from the USA and Europe, do you consider the suppression of the criminal action of the  leader of the mob called  a Georgian political party a threat to the collapse of our state, and do you ignore  France and Spain at the same time? Did you consider the attack on the US Capitol building as home terrorism and fired not rubber but hot bullets at the people, and did you believe  the assault on the Georgian Parliament as a harmless form of expression? Do you really believe that we  do not know what takes place in our country as you know about the current events in your country? You know the real case, but when you point a finger, there are three fingers pointing back at you.

However, the“temporary” time has passed and now, whoever has a sane mind, sees your concern and anger and knows the worth of it! You do not need sovereign Georgia. You need a pseudo-state that will have the kind of government and opposition it has now. Maintaining this reality is your thought and concern, for which you act so diligently. Our  “strategic friends” across the ocean or abroad, whether you are a senator or a congressman, I will tell you directly: I don’t have high opinion of you, but you should  know what the notorious Western democracy you are trying to establish in Georgia is based on. Those who do not know should know that the Roman democratic republican government is considered to be an ancient democracy and its principles are almost invariably shared in the countries from which the “teachers of democracy” and clever tutors often come to us. This is what the Roman legislators said: if the country is to be overthrown, the law must be enforced. I fully share this sentence, but in my assessment of democracy I refer to Winston Churchill, who said: “Democracy is the worst form of government”. Along with this phrase, I often remember what Ilia used to say: “The voices should not be counted but weighed”.

Well, you have to ask the majority how to solve this or that issue? Ask  themand that won’t do any good. Ilia will not be voted in the elections, and Kolia will be elected with applause. But it does not  surprise me: when Pilate asked the people: “Which one do you want me to release to you: Barabbas, or Jesus who is called Christ?” the crowd roared “Barabbas”.

So it is difficult to guess what is the goal  of those “strategic partners” who see law enforcement as a retreat  from the democracy? They do not want Georgia to have the statehood to be strengthened  and I think they are  achieving this. If those “friends” wanted the strong statehood in our country, then the government would not be reprimanded for why someone Mgelika or Datuna, who was  guilty by law, was  imprisoned, but would be reprimanded  for  and if the enforcement of the law is prevented. It is now (and was before!) quite clear that strengthening the statehood in Georgia is not part of the plans and intentions of our “strategic partners”. A country based on its own strongideological principles and national (!) ideology and human values ​​will not dance or sing to the tune of others.

Our “mentors” and “teachers” need obedient slaves in Georgia  forwhom they will appoint “enemies” and “friends” by  themselves and for whom they will write the text of the prayer on the icons painted by them. In our country, both the government and the opposition should have acted on the same principle as in one of the Georgian plays of the 1930s:

“What is the opposition? – one peasant asks a politicized peasant who arrived from Tbilisi  and had entered the Parliament of the First Republic of Georgia with a quota of federalists.

“The opposition is that when the government says “yes”, it should shout “no”.”

Isn’t that so now? If they  do not want this, why do not so many facilitators (?!) and high-ranking officials of the European structures who come to “conciliate” the opposition and the government, tell categorically the “rioters”: If the organizer of the assault on the parliament building is detained he is not considered a political prisoner, and the conclusions of all international observers must be acknowledged and obeyed. The government has to do their best  (of course they can do it) and do not register the  treasury thieves and drug gangs as political parties.

Well, then I would believe in your good intention, but the case is quite the opposite! If it was so, then who would need to invite political facilitators and conciliatory judges here from remote “strategic partner” countries? How true was Bissarion Belinsky, who wrote in 1841 in response to the then liberals (or democrats!): “Russia does not need democracy, it needs educated government, because in the  democracyconditions a Russian man will not go to the parliament to vote, he will go to a tavern to drink vodka.” Not much has changed since then, neither in Russia nor elsewhere.

Probably someone will argue: the members of our government do not lack education, many of them have diplomas from prestigious foreign universities. Learning does not mean education. They do not know the history and cultural traditions of Georgia and do not want to know. Without it there is no education; ignorance, if accompanied by great knowledge, results in misfortune only. The intentions of our “strategic partners” towards Georgia have finally been disclosed, but the question is whether the whole Georgian nation will understand this!

Maybe it is not directly related to the topic of this letter, but I must tell you anyway: there is currently no political party in Georgia. A political party must base  on some philosophical and political doctrine, ideology. Which party can be said to have been created on an ideological and political basis? There is one Labor party that should represent the interests of the working class, but where is the working class in Georgia? That is why it has become an arena of frivolousness and jestering, as well as other of its fellow parties.

P.S. The Ministry of Culture and Sports has just been established independently. A prominent lawyer has been appointed Minister, with four of her four deputies being lawyers. What would lawyers say if a theatrical expert is appointed as the Minister of Justice and a film director, artist and composer as deputies?

P.P.S.  The episode that took place a couple of days ago due to the visit of world-famous TV journalist Vladimir Posner to Tbilisi will give the world  the impression that there is no psychiatry in our country and no treatment facilities for the mentally ill.