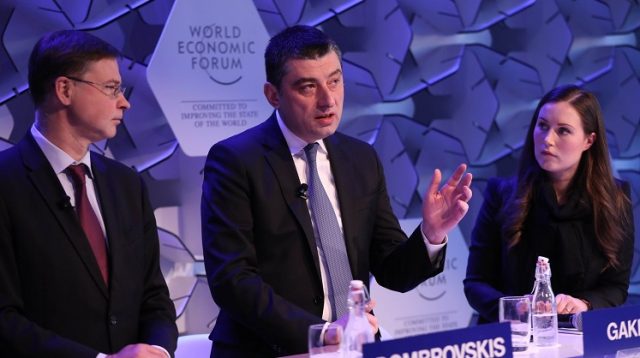 Gakharia understood a mistake he made in Davos and, he made in Munich  the statements which touch a business,  not  criticism  of somebody.

Top official of Georgia,  has periodically the chances to meet with if not the leader of Russia but at least with a minister who is associated to the nearest circle of the Russia’s president.  One of the first among those who may be named to this end,  is Sergey Lavrov. 16 years elapsed since he has been running the foreign ministry of Russia and even asked for retiring about 2 years ago, but his application was denied. In other words, a person was not permitted to retire who become 70 years old on 21st March. It means that He enjoys Putin’s boundless trust

And, an opportunity of meeting with Lavrov was announced last week and that Giorgi Gakharia and Sergey Lavrov could find a moment in Munich, sit together at the table and discuss the relations between the two countries. Before Munich it was the Davos Forum where the Georgian Prime Minister was forced to scold the top official of Russia from a high rostrum.  As a result, the above opportunities lowered to zero. So, it seems now too doubtful whether Putin wishes to arrange a direct dialog. At first he probably will teat a oil at ministerial level and then will decide by need, whether to meet with the top official of Georgia or not . . .

It can be said for sure that Gakharia  realized the mistake he  made in Davos when criticizing the northern neighbor under the pressure of  American or European  friends, and got nothing. They were assuring  Gakharia, that many other leaders would also criticize the Russian leader, but everything happened there vice versa – finally, it came out that only Giorgi Gakharia criticized Vladimir Putin at Davos forum, while the other leaders made good calmly for their countries  – arranged relations and determined further prospects with Russia and then left the forum

And, the  most important is that Russia is the world’s largest supplier of wheat, having a record crop in 2017,  was close to this figure last year too, while the  harvest of this year will be unprecedent. All counties need wheat and, considering a total deficit, all want to have friendly relations with Russia. Remember also, that 90% of wheat necessary for bread and other food products, is imported from Russia.  So, it is not difficult to understand what they did with  Gakharia and Gakharia  – with Georgia, by criticizing Russia. By the way, when  an opportunity of meeting was a topic, the opposition immediately made several statements that Gakharia’s  dismissal was planned. It should be indicated that the leaders of “Georgian Dream”  were not denying these statements  surely  and were not defending Gakharia strongly, i.e. they did not know what to say

Now, a possibility of meeting with Lavrov occurred  during the current Munich forum, and in this case also a new waves   arose. The opposition is shouting” Gakharia, as a politician, is dead, because whrn he was the internal minister, he was distinguished among others by is creativity – here winking to people, there had speech on a mitting, while now he is hiding, he does not know what to do that is why he will be dismissed.  A good logic, yes?! It turns out that if a man I winking he is a good politician, and if no – he must go from politics!  Only in Georgia it is possible to adapt policy on winking

As seen, Gakharia understood a mistake he made in Davos and, he made in Munich  the statements which touch a business,  not  criticism  of somebody. It was a signal for the opposition and, they renewed critics  – as if he does not use a high rostrum for abusing Russia. It is one more evidence that a large part of thee opposition is ruled from the west.  Yes, really is ruled, otherwise it is excluded that such ideas are born in its (opposition) mind. It is opposition that is the country’s enemy, that is why they are fallen in such borderless idiotism

Yes, even cosmos has borders, while idiotism is borderless and, for over the last 30 years  we see how a certain group of people act as enemy to their country and at the same time be  happy by this. The opposition says also that the ruling power is a slave of Russia. To say frankly, I do not see signs of such slavery. Slavery is what we do before Americans, by a direct meaning of this word. American congressmen apply bulling against the Georgian politicians Bulling is what the American congressmen express in their letters; Bulling is also when you call the parliament speaker of oversee country for explanations  and force him – a person of higher rank than you are, to stand in corner by reason only that you are a representative of a super-state and not a parliament speaker of the enslaved Georgia

A bid hysteria is broken out in connection to possible visit of Sergey Lavrov in Georgia, in May of this year. As the opposition says, If Lavrov visits Georgia, this will be an official recognition of our slavery to Russia. While in real, if we recognize our slavery based on a visit of a single man, then we are really slaves. Why, how then a visit of one man is equal to slavery?! When George Bush visited Georgia and almost all the country turned into the polygon for his entertainment polygon was not it a slaver ?

When McCain  arrived here and all – starting from our president and ended by an ordinary public servant were busy of how to pleasure him, was not it a slavery? When McCain was stopping in Georgia just for a  day, on his way  to another countries, was not it a slavery?  But no, we packed and are pack up now all this as if it is partnership. We name announced slavery as partnership – strategic partnership, to say  precisely. Where is strategy here? Can anybody see here a strategy and positive importance of our friendship with Americans?  Can either the ruling party or the opposition recall even one  fact when the USA made a really good thing for us, except for loud statements? Did they open their market to us? – No.   Is it now easier for  Georgians to go to America and find a job there? – No. Do our citizens feel any mitigation by American aid? – No. So where is  a strong  hand of help from  Americans? – Nobody sees. And, all this on the background  where the economy of Georgia depends upon the Russian market. Over 70% of any of our products we sell on the Russian market; We receive from  Russia electricity and other vitally important products; Half of  in-cash currency incomes are from Russia and. at the same time, Russia is enemy, we are slaves of Russia and Americans are our friends and partners?

Our relationship with America is like  master-slave relations. No, not like it but really, it is a bitter truth  and our population see it well. By a higher probability the officials also know it but do not recognize, because in such a case the country may find a way out and. . .  they will become forced to leave politics that will be equal to their death,  because they did nothing but lie and promises, they  do not know how to find food to survive themselves and their families. Now most of them are millionaires officially  and it is natural they do not want to lose everything. They are not interested at all, of what may happen to Georgia, they can see only themselves in future  as survivors., and do not want anybody else to act in this role

I cannot say  whether Sergey Lavrov  will visit  Georgia in May, but, by a great probability, if it happens, all the  NGOs which are fed from the  west, will start abuse of Russia  loudly of  each other. Nevertheless, it would be really interesting if Georgia and  Russia set at the table of negotiations one-to-one, without  intermediaries. On what they would agree? The fact is that West fears more than others of such meeting and agreement