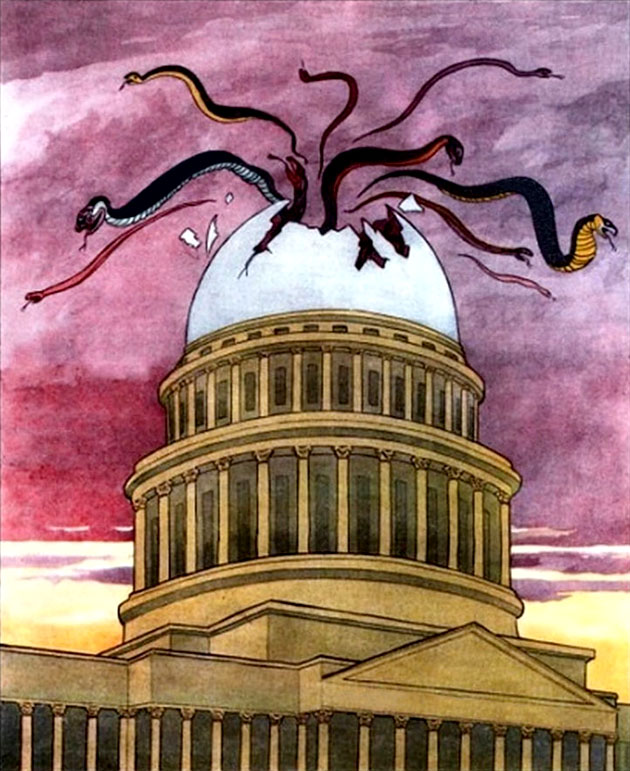 In order to prevent some intriguer to consider this letter written in support of the Georgian Dream, moreover, to consider it ordered to protect it, I will repeat once again what I have already said a thousand times before: “The Georgian Dream,” whose coming in power is (if it is right to say so) a result of my support  along with many thousands of Georgians (a long time ago prior Bidzina Ivanishvili’s appearance on the political stage, the Nazis did not lack critical articles from me, which, to say without false humility, was a “game with fire” in the wake of the 9-year bloody terror) has slowly become shit and the majority of Georgian society is so much frustrated and disappointed by their inaction that it is almost impossible to find anything positive in the period of power of Georgian Dream and, hence, it is just and legitimate to use such offensive epithets against its members’ as inefficient, dishonest, glutton, impudent.

Hense, mentioning my contribution at the beginning of the letter in the glorious case of defeating the Nationals is not a cheap boast, it is an attempt to show that I have the reasonable and moral right to refer to them in the manner I am going to apply to put it mildly, a critical conversation herewith. I think I have the right, because to be honest, I have not refrained from opposing my own flesh and blood, even family members for the sake of the truth, my own principles and other ‘stupid obstinacy’ (which I do not like to remember at all), unlike the as so-called United Opposition consisting of 2-3-member and consequently being the 2-3%-rated parties whose members go from boat to boat, jump from tree to tree, crawl, climb. The opposition has become a profession, a profitable business. They live in luxurious villas, and drive around in black jeeps and … Yeah, Impudence, united opposition should be your name!

They dare to speak on behalf of the Georgian people, these miscreants have begun to speak out and, yes, they are also able to get inside the Parliament; If not, anyway the chance to be the opposition is in their hands just like the Labor Party. Even now, they are demanding the so-called proportional elections, first of all, they want to unite up to 30 parties so that in the event of a zero barrier, even some Machutadze might go in the parliament. I say “some” because if we take a poll in the street, not a single person out of 1000 people would know his name, unless Machutadze himself was found by accident among those interviewed.

Well, what do I have to do with poor Machutadze, when the same can be applied to all the opposition parties except a couple of them?!

Well, is Giorgi Vashadze less than Machutadze?! Or is Shalva Natelashvili’s immortal “Down the dictate” not worth it, or Tako Charkviani’s “Rating Pulse” ?!

I think that people do not know not only the so called second numbers of the United Opposition parties, but the exact number of parties and, therefore, their leaders. As I mentioned above, it is almost impossible to find the positive in the action-inaction of the Georgian Dream – which means that it is almost impossible to recall the positive acts (and to put it mildly) even in the case of a not too strained desire and mind …

Recently, Mrs. Nino Burjanadze (one of the United Opposition who is considered to have a “rated pulse” in some way), to put it mildly, was out of limits when she came up with a saying (I can’t rely myself in the quote):  the Georgian Dream has no longer the moral right to say that his government is better in any way than the Nazis. My and the Georgian Dream’s roads finally broke apart long ago (after the Sakdrisi blast), and if anyone criticizes the Georgian Dream and Bidzina Ivanishvili, I am among them, if not the first, not at least the last one, so I can’t be their advocate, but unlike some other people, I have not complained about sclerosis yet and will dare not to agree with the main actor of the bloody May.

I have not used a bad language against the “Georgian Dream” (in public media it is not a good manner, otherwise I might even have used) but I have embroiled it in every possible offensive epithet, but what the “National Movement” has been doing to Georgia for 9 years (I will not start listing I hope the population of Georgia has not suffered from collective amnesia and whoever wants to remember, they do remember everything), not even seen in horror movies and what is the comparison between the Georgian Dream and the National Movement?! To put it all, inmates in the prisons are no longer tortured to their deaths, and they do not kill young people in the streets, that’s why nothing and nobody can make me say that Nazis and Georgian Dream are the same. Moreover, I cannot say that Misha’s rule was better than it is today.

However, this is where our American or European “friends” are leading the case, who act as graphomans and keep sending letters about the lack of democracy in Georgia to the authorities of Georgia shaking with fear. Therefore, without any diplomacy, practically in the open text, the collective Uncle Sams state that the government of Georgia should be replaced by the so-called United Opposition parties that have at least a slightly higher rated pulse – Nazi, European Nationals, Girchi, Republican and perhaps practically Nazi Labor party, or the Coalition, which are parties of different denominations but one neoliberal ideology. Let’s say straightforwardly, this means Nazi’s velvet counterrevolution, restoration of the power of the Nationals.

All of this will also be the fault of IRI and NDI research, plus Captain Eka Gigauri and Private Nino Lomjaria, that is, the active actions of the nongovernmental sector, who “democratically” remained silent when Georgia was drowned in its own blood and tears!

In the meantime, however, the US ambassador to Georgia has arrived, who, I doubt is not eager at all to change the dismal picture above in favor of Georgian Dream officials, who have preferred to apply the so-called Vaselin-method for the improvement of the difficult situation and sentthe delegation to the US Congress and Senate to say that the rivers of critical writing came from them because of the false information provided by the Nazis, now the Zalkaniani will bring the truth to the US and the flow of letters will stop. Georgian Dream supporters keep repeating such nonsense which is ridiculous if not satirical! In the paraphrase of Iliko Chigogidze’s statement: You fools, the Americans know what is in the heart of the earth, how cannot they know about the Dream’s intention without Zalkaniani?

They say that disproportionate force was used to suppress the attempt of storming of the parliament, where were you when the peaceful protesters were brutally dispersed on November 7, 2007, or  when dead bodies were put on the roofs on May 26, 2011, where were you, human rights protector troubadours?

In short, so many “Where were you then” can be remembered that an adequate, self-respecting government would not go with a case full of Vaselin to American and European “friends” but would remind the West that friendship is not just a game in one direction, it is a two-way process and if they are threatening to review the strategic alliance, we would think ourselves about the change of the strategic ally, or change a foreign policy of the country.

To where? – In my opinion, Russia’s direction has no alternative!

P.S. In conclusion, I would ask a rhetorical question: Before the October 1, 2012 elections, if you knew let’s say on September 30, that you would live in the country you are living in today (I mean economic and social hardship), the next day, October 1, you would vote at the ballot box for Misha or Bidzina? If this question is not rhetorical for the majority of Georgian population (ie the answer – Bidzina, any way), then we are lost and that is over…