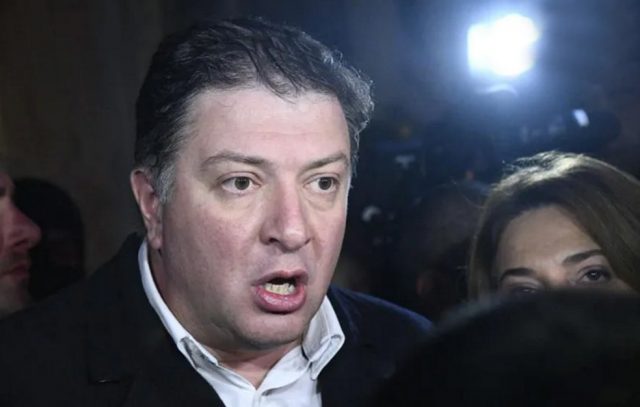 A paradox,  but the fact is that in Georgia, offices of ministers or parliament members are automatically equated with earning millions, but by rule, it must not be so. Even in conditions of high salaries existing here, a minister would accumulate millions-worthy property only after 20 years of service and in case only, if  he/she spends absolutely nothing from such a salary. But, in contrary to the above, each of us heard many times, that a man came and occupied office for half year and then left it, declaring that he goes back to business. But in the past, he, his family members or relatives, had no business or business-doing talents but became millionaire in one year. . .

Yes, in Georgia only it is possible to become millionaire in one year , when  holding a public servant’s office. Look! a week ago mayor of Borjomi Municipality and chairman of local board were arrested for  getting 200 thousand GEL bribe. If consider the scales of authority of their offices, it would be easy to understand  how much does it cost to make a deal with a governor, head of department, minister  . . .  Pleas do not start now that no such deals are made. If no, how then minister become millionaires?

Last week, there was a fuss about  Aleksandre  Chikaidze. He held the minister’s office for a very short period, he had no bank deposit, but he earned several millions and, nobody asks him how he managed to earn. We can  say for sure that the current state power will never become interested in Chikaidze’s case, and only become aware of it. Why? Because, if Chikaidze is punished, many others must be punished too, but  this is  a long  chain, and its tail will come to punishers. Let’s stop now with Chikaidze and  take for instance Giorgi Kobulia – a person  who  really had his own business and millions but  then left everything and came to the Georgia and became the minister of economy. Why? Perhaps because it was his chance to earn more , but failed to adapt with the existing environment and foresee things and. . . was dismissed  – sent back.  Nobody knows where is now this  former  minister, what is he doing. Instead, we know that nobody seized of him the millions he had. Another thing is that he could not earn more here.

In parallel to this, we heard for a long time that ministers’ relatives – father-in-law, wife’s brother, sister-in-law, won all tenders Bur, the officials say – these tenders are electronic, we cannot influence on them. Participate yourself, you will have equal chances. But, in real, do you know how does is it work? These tenders receive finally the companies which took third or fourth places while a real winner is called to come, and he/she is explained that must say “No” on tender. The same is then applied in case of a second place winner, etc., until a company appears behind which the  officials stand. Do not say that you know nothing about such schemes! Look through the tenders held and you will see that in at least 80% of cases a real winners are those which took second or third places. Is not it interesting?   A man wants to win a tender, participates, wins, and then – denies it voluntarily, by his own wish. Such cases even do not require investigation. But, nobody raises a voice with fear. Another theme is that those winners  then donate millions to and help voluntarily the leading party

Do not think as if we write this only towards the current officials. The situation in times of the former state power was much  worse. David Kezerashvili, Gigi Ugulava, Givi Targamadze and  others who came in power with one-boots by direct meaning of this word became official millionaires. Kezerashvili resides in France, has his own villa, business, his property value exceeded 100 million and, if anybody will say that he earned this  money during 9-yeaar of his being in  the government, we’ll pass it.  The current government’s weakness is shown not by  fact that  it failed to prove illegality of Kezerashvili’s millions and accused of it, but a doubt arises that another man is now using the Kezerashvili’s channel and in other pocket these millions flow, then other man will come, and so on continuously. If calculate how many individuals earned  millions in such an unclear situation from 2003, we will receive our doubled budget and, if this money is used for the good of the country, we would be free of any external debt , while our economy would be in progress. But no, this money flows to quite another direction, in pockets of top officials, and the grants transferred from abroad, flow also to their bank accounts. The August War was   advantageous to the government because after it 3 billion disappeared simply – the amount that could be used for the good of the country’s population. And, who was brough to responsibility? – Nobody, and we can say for sure that nobody will become liable. Not because nobody knows who is guilty but because the government takes care of itself – we keep silence, do the same you too.

Yes, officials are as lambs over the budget and,  they not only steal the budget but they eat it with a large spoon and they are sure that nobody make them answerable. Mayor of Zugdidi   was also arrested for bribery, but what then, a month ago, a he was noticed in  restaurant  – probably was released during the resting days  because of good behavior? Maybe only mayor is distinguished b y a good conduct and nobody else among prisoners?  No, of course. He knows much more than he told before the court and, if he starts talking about what he knows . . . We have serious doubts that the same will happen in case of top officials of Borjomi Municipality. Gigi Ugulava is accused of embezzling   48 millions, at first he was arrested in length of 3 years, now will be added the same and, what comes out?  1 year for each 8 million. This for the identified suns, but and what about the amounts of which nothing  is known?

One not less interesting record appears often in the   declarations of MPs or ministers” as soon as they are appointed,  other individuals have a wish to gift them something – land plot, artistic work, house. But nothing similar happens until they are appointed, only thereafter a long row of such whishers  appears. Nobody asks – for what they are gifting such valuable properties?

All this takes place in terms where the remainder population is at the brink of hunger. The former government started and the current one continued successfully that practically, there is no middle layer  of the society in Georgia  – either too rich or too poor. While the middle layer  on which any state relies, is disappearing day-by-day because it becomes unable to accumulate even small money and create something worth for future or have a holiday together with family . All money is directed for daily problems. Because of such “regime” the population sold during 1990s all it had. And, nothing is remained to sell. If anything is, – the banks eat

Unless  one and the same laws apply in Georgia to any single individual – rich or poor, we will remain as we are now, several will earn millions in several months and spend freely knowing that nobody will ask them how they earned it. Only one law operates in Georgia to this direction – no law exists.