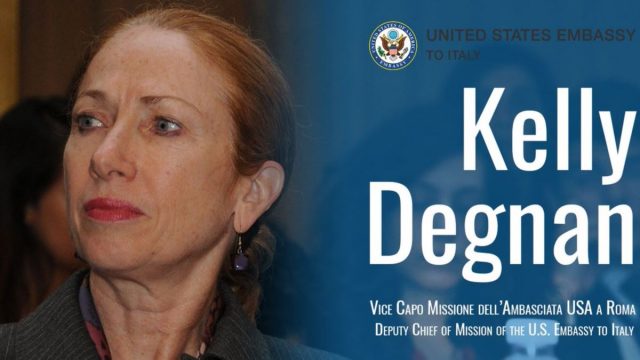 What do you need elections for ?! Give Kelly Degnan a clean sheet of paper and  she will write down who gets what percentage, who will be appointed to which position, and who will be the prime minister. In the end it will happen anyway.

In America, it seems, all problems are solved, no challenges exist anymore and all Americans are very happy. So what if tens of thousands of people are infected with the coronavirus every day and several hundred cases end in fatalities ?! The US congressmen still manage to find time to criticize the Georgian government, while accusing the current government of loyalty to Russia. Another letter was sent  by U.S. congressmen last week.

“After regaining its independence in 1991, Georgia took major steps to transform the country’s economy and secure relations so that international trading partners could access the market. Georgia has taken important steps in the field of defense and towards free and fair elections. But since Russian oligarch Bidzina Ivanishvili and his “Georgian Dream” came to power in 2012, the country has suffered a setback. After talking to your colleagues, we feel that the State Department is doing its best to monitor the private investment environment, especially for American companies, as well as the Georgian government’s commitment to pursuing democratic reforms and aspiring to NATO membership. As you hold future meetings with Georgian officials, especially with Gakharia, we urge you to remember our concerns on a number of issues: The current Georgian Dream government, manipulated by Russian oligarch Bidzina Ivanishvili, is trying to expel American businessmen from the country. This is done to increase investment from Russia, China and Iran. “Activities in Georgia’s Black Sea ports threaten the US national interest, namely American companies seeking to protect Georgia from Russian and Chinese influence,” the letter was written by US Congressman Mike Pompeo, after which Pompeo spoke by telephone with George Gakharia. Of course, no one will tell us the content of this conversation, but the fact is that the conversation would be a continuation of the letter.

Let’s start with the fact that the congressmen are publicly insulting the chairman of the ruling party Bidzina Ivanishvili, and the people who are in power thanks to Ivanishvili simply can not get a vote. This is because they are afraid of the rage of Americans; They do not want to be blacklisted by the US Congressmen, because then America may demand the dismissal of these people and … they simply can not refuse.

The paradox is not just that. pardoned Gigi Ugulava and Irakli Okruashvili were pardoned by the Georgian President at the request of the Americans, and now time comes for  Giorgi Rurua. He was convicted of illegal possession of a firearm and sentenced to four years in prison. Nevertheless, US Ambassador Kelly Degnan said: “It is the president’s prerogative to pardon George Rurua. The President took a bold step in the previous direction, which was aimed at depolarizing the situation in Georgia. “Ultimately, it’s up to the president to decide.” That is, Kelly Degnan secretly called on the president to release Rurua, and that was when the sister of the Toradzes, who were killed in the 1990s, sent a letter to the same congressmen in which Rurua was directly involved as the perpetrator of this heinous crime. The congressmen passed this information from one ear to another because they do not allow the investigation of such a heinous crime, they want something else – to change the current government by any method and more obedient people to come to the head of the country, more obedient, because the “dream” started the genocide. He supported the Georgian nation with the help of the nationalists and did not continue to be active. This is exactly what the Americans do not like and that is why Ivanishvili is referred to as a Russian oligarch. But to think about it, we can not really accuse the representatives of this government of pursuing Russian interests. They do not talk to Russia (despite Russian readiness and numerous calls from the authorities of this country), they do not try to deepen economic relations, do not change the foreign course and stubbornly move towards NATO, where no one will accept us.

So, what is the manifestation of loyalty to Russia? Nothing at all! And the main reason is what we mentioned in the chapter – the nation does not live in fear, half of Georgia does not walk with suspended sentences and waiting to be caught, the impoverished population wakes up slowly and is no longer fascinated by the Western perspective, the perspective that has been around for 30 years, only It was bait and for a good while nothing will change.

Fortunately, President Salome Zurabishvili said categorically: I am not going to pardon Rurua and no one can change my mind. Hopefully, the President will not break his word and we are ready to forgive her for even creating  her (president’s) own flag. No, the Georgian kings did have flags – the flag of Tamar, the flag of David, but let’s admit that Ms. Salome is neither Tamar, especially neither David and,  the presidential flag looks something ridiculous (or rather, not the flag, this initiative itself) and hopefully we will not be imposed today to celebrate the president’s flag. On the other hand, in ancient Georgia, when princes went somewhere, they carried the flag of their principality in front of them and thus the people met, Gurieli’s team was moving, Eristavi or Liparit-Baghvashi. Now, when   see a specific flag, everyone will know that Zurabishvili’s escort is moving  ….

Let’s go back to Degnan’s next statement, which was even ridiculous. The US ambassador said: I have no right to consider the letter of the congressmen, but the Georgian government should pay attention to the phrase of any congressman and take it into account. In other words, we must take into account that Ivanishvili is a “Russian oligarch” and, at best, hold rallies near his house, and if “the government shows prudence”, his arrest will not be bad either. Yes, they are going there to portray Ivanishvili as an enemy of the country and to package it all with Russian motives.

Degnan has already said that it turns out that Russia will try to interfere in the October elections and influence the results. This is when Degnan (i.e. the Americans) set the rules for the elections, changed the constitution with a footstep, and now they say, “Welcome and no force can get 40% of the votes to be able to form an independent government, a coalition government.” You have to create.

Coalition government, in the literal sense of the word, means political collapse and snap elections, elections that smell of another revolution and the West will spare neither financial nor human resources to make a “chrysanthemum revolution”. Again return the power they want. There is a real danger of this, and the Western opposition is taking the scenario of such a development to heart.

That is, the West has enacted a law on how to hold elections and now sets the percentage that parties must receive in these elections. Then you ask: what is the need to waste tens of millions of GEL for the elections ?! Put a clean sheet of paper directly to Kelly Degnan and write down who gets what percentage, who will be appointed to which position and who will be the prime minister, in the end it will happen anyway. So much the easier it is, and then, if the Prime Minister does not justify it, we will clean up Degnan. However, no, this last one will not come out, because you told us one, only case, that we have held America or Europe responsible for something ?! Well, why do we want to find the culprit? If something goes wrong, isn’t “Russia to blame for everything”? It is easy to reach out to the North, they have no reaction, they are not Americans, for whatever reason, they impose sanctions on everyone and everything.

Why our government is not investigating the Toradzes’ case is a separate topic of conversation. There are witnesses, there are people who witnessed that bloody night and it will not be wrong if the investigation of the case is on the agenda. Do you think that Rurua will no longer be mentioned as a political prisoner and then the American ambassador will not say, “I hope for a reasonable decision by the president”.

P.S.  We mentioned Trump in the title because this man publicly announced from the UN tribune: America will no longer interfere in anyone’s affairs and everyone will take care of their own affairs. Apparently, Degnan was not watching TV at the time and did not hear what her president was saying, probably because she was in consultation with Risch, Kinsinger, etc.