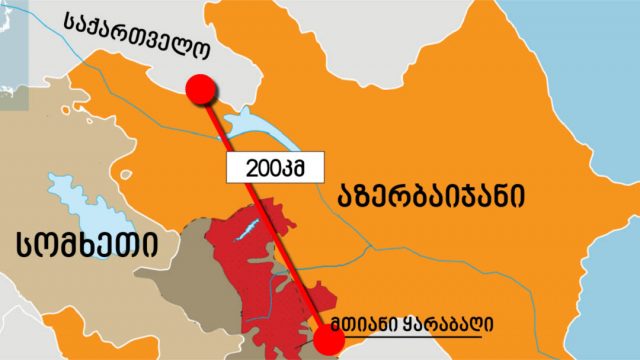 In our neighborhood, unfortunately, war is unleashed. Using modern technologies and technique  – with drones, tanks and anti-aircraft guns, Azerbaijan and Armenia are destroying each other’s manpower or armored vehicles and apparently are not going to stop. In any case, the President of Azerbaijan, Ilham Aliyev, has repeatedly said: We will not stop until we reach the final point, that is to  return of Nagorno-Karabakh, a territory that, for several years now, has been called the Nagorno-Karabakh Republic, has a self-proclaimed government and is actually controlled by Armenia. Azerbaijan considers it as its territory and the UN agrees with that and if the United Nations wants to intervene, it must take the side, the side of Azerbaijan.

As of today, there are about 150,000 Armenians living in Nagorno-Karabakh, and the President of Armenia says he  protects his ciitizens. In general, war is very bad, especially when it is in the neighborhood and usually it kills a lot of young people.

In such a case, it is important to take the right position, to choose the words, to act correctly and, of course, to think that the ongoing war in a few kilometers from the Georgian border not to damage Georgia directly. Nevertheless, the opposition called on the government to take immediate action, call on the Security Council to do something.

We have serious doubts that if we had Mikheil Saakashvili as president again, Georgia would get involved in the war and Saakashvili would fight our soldiers. Now do not say our boys are not fighting in someone else’s war. It would be ridiculous for a Georgian man to go to war in South Africa and it would be taken at the level of state interest. It turns out that we are fighting in Africa because we want to join NATO, but so far no one is accepting NATO’s door, and they have tried several times: it is time for Georgia and Ukraine to think about a common military alliance, it will be difficult for them to join NATO. Therefore, a maximum Georgia can  play is  the role of mediator in the confrontation between Azerbaijan and Armenia, and not follow the call of the opposition –   do anything! nor the Western partners, who will already have their views on this issue and the role of Georgia in this opinion. Now, at least once, the government should think only about Georgia, about the security of our country and not about how other forces should take advantage of Georgia’s reckless actions. It gives us a little bit of optimism that both the Armenian and Azerbaijani sides tried to involve us in the conflict (Armenians blocked the road to Turkish trailers in Javakheti and cut the internet cable to Armenia in Shida Kartli), but so far they have not succeeded.

As soon as the conflict started and the first bullet fell, we hoped that the West would not wait for the aggravation of the situation and immediately try to intimidate the parties, but on the third day after the war, when both sides published the first data on the dead, we saw people exploding tanks NATO Representative James Appathurai held a briefing and said with a worried face: NATO is concerned about the current events and I confirm it.

How could it be that after the official NATO concern, the EU did not show anger and so it happened – the ministers or the first persons of the EU member states in a “by the way” manner: said to each other: we are concerned about what is happening. Yes, by the way, because, in fact, every citizen of Georgia is more worried about them, but   can not change anything and only watches the developments. The difference between ordinary citizens and European leaders is that ordinary citizens expect nothing more than disaster from this war, while in the West they want to benefit. Slightly below that, let’s talk about America beforehand. From across the ocean, Donald Trump also gave us a voice, and presumably because he and his first wife were diagnosed with the virus, the voice was a bit weak. In short, the first person in America took one breath: sit at the negotiating table, I’m worried too, and went to get  plaquenil.

Everything goes beyond the fact that the two states will not stop and kill each other both in terms of manpower and their own economy. They will inevitably weaken because war production is not cheap and involves spending tens of millions of dollars every day. Yes, the Armenian government funded by the Soros Foundation (after the revolution, they are following exactly the same path as the Nationals) is still hoping for Soros, but do not hurt anything until Soros invests in military equipment and weapons. He needs experiments and therefore invests money in this direction, and these experiments serve to change and degenerate the human subconscious. However, the war may be necessary for the Soros people as well, because we were involved in the war  in 2008 and then they successfully continued the experiment they started!

It seems that the superpowers in the Caucasus are not only interested in Georgia, and given that the territory is divided into three states, they want to seize all three, precisely the territory and not the people living there, because we are extra baggage, they do not need us   and that was why they helped us only with water and pamperses in the 2008 August war, and even that aid was delayed. We doubt that Armenia and Azerbaijan expect similar humanitarian assistance. This war, sooner or later, will surely end or the conflict will be conserved and UN peacekeepers will be deployed between the opposing sides. Internationally funded countries will be able to provide “assistance” to economically disadvantaged countries in all directions, such as Georgian banks often provide to lenders, and then simply enslave the countries that depend on them financially. Most importantly, in addition to financial resources, Armenia and Azerbaijan will face a shortage of human resources, because the young boys who died in the war today are the future of the country, they have to create, they have to work and now this human resource is being sacrificed.

Then it will definitely be similar to the Geneva format, they will find the Azerbaijani and Armenian “Zurab Abashidze”, who once a month in July in Geneva at our expense, will discuss “a number of issues” endlessly and the real shift in conflict resolution will be zero. Instead, the country’s constitution, not even the local legislators, will be written by the American ambassador accompanied by European ambassadors (as with us). They decide which party should get what percentage in the election and who should lead the country. Yes, it will be necessary to refer to Russia as an occupier. So what if Russia does not interfere in this war ?! The first person of the Russian Federation limited himself to a statement and agreed to the role of mediator. Instead, Turkey intervened openly, but no matter, as seems for Turkey it is allowed. As a result, the Caucasus will go in a circle around the same people. We know our salvation is in NATO and the EU, but we will never be accepted there. We will have exactly enough income not to starve to death (several tens or hundreds if starving or starving, no problem), the people of all three states will live, practically, the same and will have the same problems. Maybe in the morning they will call us “polychronion” at the American embassy and then someone with a beard or a beard will start: “The one who gave us our bread and food …”

Someone might think this is a bitter joke, but here we go with big steps. What else can we attribute to the fact that every day a few dozen (at least) young people lose their lives and, apart from worry, no one does anything. If this is a matter for the two states, then why are other countries trying to interfere in their internal affairs in times of peace? If this is what they want – is war the best way to do business? First they will buy weapons on both sides, then, if the war ends, they will supply more weapons for fear of a new war, then they will distribute expired products stored in refrigerators for years, thank them, and practically sell the garbage prepared for dumping. Ate meat, imported from Europe-America) and at the expense of the beam misfortune will arrange such nirvana that you will like too. And, do not forget also that leaders of different countries will startfrequently visits in Armenia and Azerbaijan, they will be  named d as strategic partners, maybe even several leaders will arrive together and will  easily enslave these countries.

. . .  In our neighborhood, unfortunately, war is unleashed. Using modern technologies and technique  – with drones, tanks and anti-aircraft guns, Azerbaijan and Armenia are destroying each other’s manpower or armored vehicles and apparently are not going to stop.