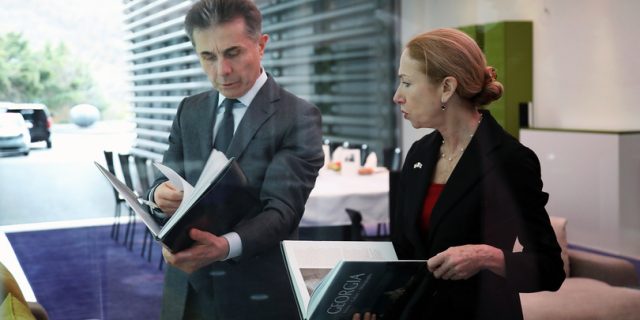 “Under such counterproductive attitude, it has naturally become impossible to move to a proportional electoral system by 2020, and the opposition parties themselves were aware of it. Today, therefore, I will reiterate that it was important for us to move to a proportional system and that this goal has been achieved. Although mixed elections will be held in 2020, constitutional amendments will be fully implemented in November 2020, based on which elections will be held through a fully proportional system after 2020. ”  – This statement belongs to the former Speaker of Parliament and the acting executive secretary of the Georgian Dream Irakli Kobakhidze, a man who was actively involved in the negotiations on electoral system changes. However, after the parliament failed the law, it urged the opposition parties to launch an election campaign, since there was simply no other chance and new negotiations would no longer take place.

Not only Kobakhidze, but Bidzina Ivanishvili, the governor of the country, Kakha Kaladze, the mayor of the capital repeated the same. In general, all the members of the Dream, both hight ranked and low ranked, argued in one voice that the elections would be held in a 73/77 system and that there was no alternative. But the “Dream” proposed, the American ambassador disposed.  Yes, the US ambassador was God for the previous government and is God for the new government as well. No matter the ambassadors change periodically, the worship process does not slow down, and kneeling Georgian politicians will repeatedly clean the entrance to the US embassy.

Before we move on to the main point, let me introduce to you Adam Kinsinger’s statement. He is the head of Georgia’s Friend Group in the US Congress.

“The international community and, moreover, the Georgian people, have imposed on the authorities the transition to a proportional electoral system. I hope this situation will be corrected and corrected very soon. When looking at the region, it is important to remember that Russia suffers because of its repressive rule. Georgia is not Russia and the Georgian people demand and deserve more than the parliament has shown, “said Mr. Adam.

Let’s start with what Kinsinger knows, what he knows about what the Georgian people deserves. Those who do not remember, will be reminded that those MPs who have failed the law are majoritarian MPs. After the decision was made, they said that they had consulted their electorate and they were instructed not to pass the bill. In other words, the parliamentarians acted on the demand of the electorate, the Georgian nation, and Kinsinger further stated in his statement, no matter what nation thinks, it is most important what I want. As for Russia’s failure, this is a separate issue. It has been several years since America on the one hand and a ‘progressive’ Europe on the other hand have been struggling with Russia, but they have not succeeded at all.

Following Kinsinger’s announcement, US Ambassador Kelly Degnan let her hair (which she has indeed) loose and summoned the government and opposition to her residence. Before they came to listen to Ms. Kelly, government officials said ominously that there would be no change to the Electoral Code, the system of 73 majoritarians would not be changed by anybody or anything, since it would be breach of the constitution and they supposed that the discussion would refer to election barrier. Leaders of the ruling team unanimously argued that changing anything would be a violation of the constitution. In short, they came in to talk to Degnan and …

“As it turned out, the negotiation resources are still there and the meetings will continue,” this was the general pathos of further statements by the government’s spokesmen.

There are two options: Either the US ambassador knows the Georgian constitution better than the Georgian parliament members, or she has told them directly, I and Kinsinger do not care about your constitution, everything will be the way as I tell you. The second option is more realistic, as it is unlikely that Ms. Kelly Degnan would bother reading the Georgian laws, knowing full well that the chief legislator in Georgia is herself, and why bother to read anything someone else has written?

The first meeting was followed by the second, the second – by the third and slowly the leaders of the ruling team were knocked down. Eventually, not the opposition, the US ambassador scored her own goal and forced on us a ridiculous law. I’ll tell you now why this law is ridiculous: 30 majoritarians means that at best one majoritarian should protect the interests of 100,000 people, one hundred thousand people’s problems should be studied and reacted by one person. Out of this hundred thousand, not half, not even a quarter (25,000) will be able to meet with their chosen one physically. It turns out that this method of 30 majoritarians is good-for-nothing and it was chosen for one purpose only – to hide the total failure of the government.Their conscience was cleansed, and no matter how loud we shout “the king is naked”, at least they will tell us that we have agreed to a compromise option Yes, I have to mention Kinsinger again, after signing the memorandum, Kinsinger said if the memorandum does not become law, we will do something, everyone will be surprised. “Something” is probably the next revolution, as even a child already knows that the United States was behind the 2003 Rose Revolution, led by Kinsinger’s patron and breadwinner John McCain.

So the supreme law of Georgia was torn over the heads of all us together or separately, and of course they will formally sign it. Government officials can no longer make any mention of the constitution, no longer make such rhetorical statements as they used to, and they only repeat that with this code they have great advantage and they will win confidently. However, there are already losers, losers with the US ambassador, and most of all, they need to understand that they are not building a state, they are playing statehood with the permission of the Americans. Members of the Georgian parliament and government are like children who make noise, but an adult opens the door, scolds them, gives everyone their place and force them to play by the rules they want. This is how Ms. Degnan appointed just four months ago, opened the door of Georgian politics and made the ‘brave men’ kneel down.

Again, let’s make a comparison: If any Russian government official said that he had a better idea than the Election Code of Georgia, hear what would happen?!

The “knights” of Georgian politics would stand in the line of criticizing him, America would name this statement as the interference in Georgia’s domestic affairs, and once again declare Russia a major enemy and threat. However, we have clearly seen that we, as ordinary people, do not choose anyone and do not make any decisions. Everything goes the way America wants it to be, and to be sure, after all, Degnan would tell Georgian politicians how many percent to get in the election and how many members each party to have in the new parliament.

Is not this slavery in the most direct meaning of this word? Of course, it is and those who seek the approval of the opposite, he’d  better look through the past (made 1-2 months ago)and current statements of the top officials or opposition. They are radically different from one another, and that difference emerged just after meeting the US ambassador. Well, European ambassadors met Georgian politicians too before the US ambassador, but the American whip seems to be more bitter, and they did not realize it until Degnan use it against them.

October 2020 will come, part of the Georgian people will go to the polls, believe or not believe the promises, and finally, if the US does not like the result, another Kinsinger-led revolution will unfold. And in all cases, we will go up the same hill again, which we have been going on for several years, and which seems endless. Yes, we are knocking on the door of NATO and the EU when climbing his hill, but as the great Ilia would say, “no voice, no respond …”

P.S. And another – “moaning is heard in the sleep of Georgia.”