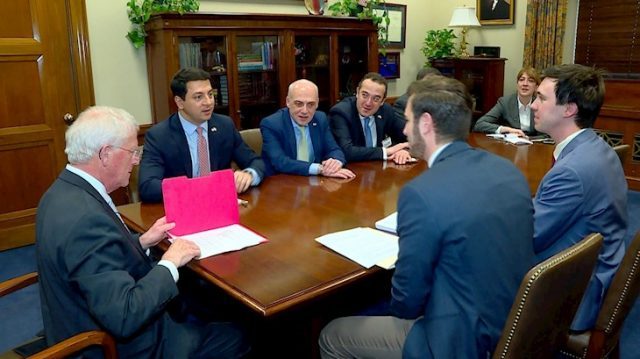 Our government dared and appeared on knees before the American congressmen and started   making excuses what it did, how, and what else it will do

Last summer, the Georgian champion football club “Saburtalo” sadly lost with the FC “Ararat  Armenia”  on the qualifications round of the  Champions League. It even seems not so correct to say sad lost, because it was just an insult to the fans and, many-years fans who may recall principle confrontations between ”Dimmo” and “Ararat”, will necessarily understand  easily what do I mean in this bitter lost

“Saburtalo”  is preparing for a new season, within the scopes  of which the club had a friendly match with ”Zenit” of St. Petersburg and,  lost 0 : 4. A big noise erupted – why “Saburtalo” played with “Zenit”, are they our friends?  Many said also – our team has not a feeling of dignity – how did it lost by 4 balls? To In short, this friendly match caused such a resonance that if even a half of it were true  for the official match with “Ararat”,  it probably  could be indeed shameful for the officials of the Tbilisian  club/ One more thing: nobody indicated  that as of today, “Zenit” is thee leader of Russian  Championship and the main candidate to win it; That the  club’s budget is higher  that the budgets of all Georgian clubs taken together  (I mean the Georgian clubs of the First League); That, the plyers of  “Zenit” are the national team members  of  Brazil, Serbia, Spain; That, the club spends in transfer of each player about 25-30 MIL USD (the second by-rank Georgian club “Torpedo” Kutaisi became bankrupt after it  accumulated  3 MIO GEL debt) and, despite of  this – why did we loss and that is the main thing – why at all did we play with  this club?!  Let’s say also that we are the nation  that separates  from each other sports and politics, in conditions where sport is the worldwide largest  politics

I recalled this football-related case for a simple reason that following the  abusive behavior of American congressmen  I want to tell you about humiliating step made by the top Georgian officials. It turned out enough the ordinary American congressmen  fabricated and sent to Geor6gia a letter saying that they did not like our policy,  the Georgian state power immediately sent to America our Speaker of Parliament  and a solid delegation – for our strategic partner not to become  disappointed of us. So, Archil Talakvadze  arrived in the US and informed us proudly everything is settled American congressmen are glad of our visit and  that they receive personally the information from us. This is what Talakvadze says. As to the  American congressmen, they did not yet say anything interesting, because they probably, are surprised of the visit of Georgian party: How powerful our letter turned out  to be. From now, nobody may restrict them to write letters, while Talakvadze may run to America by their request as a child, to justify what we did and why

We cannot say what does the action of the Georgian government mean. We cannot say, because it is almost impossible to imagine where a self-respecting government of any other county can act analogically.  For example, when Donald Trump (and not a some of congressmen) criticized the  French  president Emmanuel Macron, the latte’s responsive text was about like this: Do you have nothing else to do? – and the theme was closed. Now, can you imagine what could happen if France   sent its official delegation to America  – why do you think so, we are here to  explain thr things ted-a-ted  and what we are going to do in our country . . . Neither to itself not to its citizens thee French government could  utter to act in this manner. But, our government dared and appeared on knees before the American congressmen and started   making excuses what it did, how, and what else it will do. The opposition celebrates in its part – look, how the Americans deal with our governmental delegation, however, the opposition does not say why we sent the Parliament speaker in the US. Vice versa, it thinks the “Elder brother” will “punish” him

About two months ago  Vladimir Zhirinovski also said “something”  about Georgia, almost the same as American congressmen, but, this his statement was ignored by ours , and only one or two MPs became interesting of why the Russian Duma member infringes in our local affairs. That  was all. But, wait: If the Russian MP says something about us it is infringement in our local affairs, and if  the American congressmen act so, read carefully our laws article-by-article and are practically authors of our legislation – it is normal?! Is it independence? Did anybody ask our voters whether they are interested in what an American congressman will say? Or in general, are they for an unplanned visit of our Parliament Speaker and his  representative  delegation to the USA and spend there our Money?  We can say for sure that any such voyage cost over  hundred thousands. And, this sum – on the background of the unfortune happened several days ago in Baghdati, where six coffins  with bodies of hungry children there, were laid off from the church. Maybe our population could agree if the money allocated for Talakvadze’s visit abroad, give to  these sic children for eating , having  houses, not to be burned in the ground-house? Was not it the Georgian Parliament that started its spring session with  a minute of silence for honoring their memory? And, what else did our legislators? It that very evening they had a n expensive whiskey with a price that is almost one-month salary of majority of Georgian families? In that moment they did not remember  that thousands of families live in poverty and it is only a case of time  in which other family a candle is fallen to cause a fire and then – the Parliament stand in a minute of silence to  honor others memory

Let’s come back to the state and its interests. As if there are only two poles for our government and the opposition: Russia (from which we need nothing but the energy carriers, wheat, millions of Georgians employed there,  money transferred from  Russia, the Russian market) and America, with which we are in a full coordination in everything  and even in case of  insignificant raise of voice by an ordinary congressman the Parliament  speaker of the “independent” Georgia we runs there to explain  by excuse, of what is what  and, asks not to be nervous. Is this t for what we struggle and wish? This is a chronicle of announced slavery yoke

“The congressmen are grateful to receive personally from  us the information they are interested in” – our vice-speaker Kakha Kuchava declared and confirmed  that he personally reported to the congressmen and, what is more important – both sides are satisfied. America is satisfied because it is easy to understand – it received one more confirmation of our slavery. But, I cannot understand why our delegation is satisfied and why our boys are so agitated –  did they walk in the  Star Alley? How can I believe that these adult people do not realize that they are considered by Americans as ordinary slaves and that the Americans respect them like hey respect slaves in general. It is excluded that ours do not understand it, but they laid ash on their  head, throw ash into our eyes and try to create a n impression that as if everything is OK

In its turn, the opposition is pressing fully, wishes to tension maximally the situation and says that if the “Georgian Dream” is not give up the power, then the Georgians will go to streets and storm the Government and the Parliament buildings. The opposition believes the people will sacrifice itself for the opposition’s come into the power. The leading party also believes that the people will do the same in favor of them and, the most laughy thing is that both sides are hoping for the people’s support, notwithstanding the fact that people  meant and mean nothing for them

Misters, did you think that a day will come when people really go to the streets and destroy fully both of you – leading force and the opposition? Did you think that this imposed slavery   is fed up to people? Do not you want to look at this reality? Just this is your problem  . . .

But until, overcome that loss in the official tournament with  “Ararat Armenia”  and protest loss in a friendly match with “Zenit”  . Not it is in fashion to protest every thing Russian, in fashion!