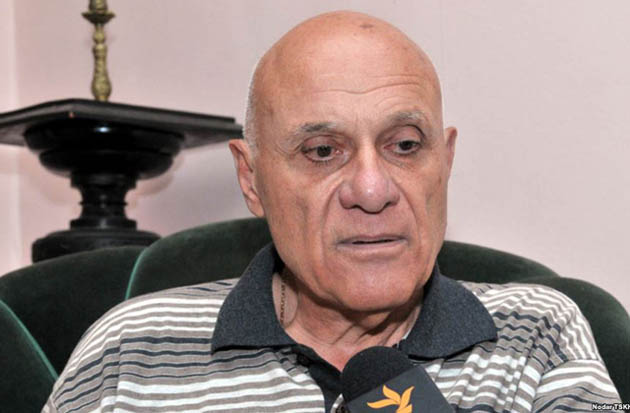 A small group of aggressive “liberals” responded to the visit of the famous Russian journalist Vladimir Posner to Tbilisi with another Russophobic performance at the Vinotel Hotel and chanted slogans: “No to the occupant, no to the occupation”! And, threw eggs and various objects at the walls of the hotel  (the fired objects hit not only the facade of the building, but also the law enforcers); This the second “Uraliberal” masquerade after Gavrilov’s night, in which the vanguard of old faces – supporters of drug legalization, LGBT propagandists, feminists and various foreign-funded NGOs – were participating, was well organized this time as well. Moreover, the “Protestants”, led by the former European Natopnals  Elene Khoshtaria, knew exactly the schedule of the guests’ movements, their arrival and departure times, planned events, etc., but it is unknown from whom they had this information.

Vladimir Posner soon left the hotel building and left for Georgia with friends, but the incident did not end there – after the successful expulsion of the 87-year-old journalist, the “fight against occupation” continued in the streets of Tbilisi –Alexander Griboedov’s monument was insulted by “Unknown Persons”… Later the inscription “Russia is evil” was deleted by Tbilisi Sakrebulo (local governance) member  Erekle Kukhianidze. . .

What was the purpose of the performance  held by a particular aggressive group to expel Posner, and how do such actions affect the already tense Russian-Georgian relations? – Political scientist Soso Tsintsadze talks to us about these and other important issues.

– Mr. Soso, a few days ago, exactly the people who provoked the “Gavrilov Night” in that time and tried to overthrow the state by storming the parliament, held another performance due to the visit of the Russian journalist, Vladimir Posner, to Tbilisi. Eggs were thrown at the hotel building and law enforcement officers were verbally and physically abused by them. . . How do you assess this fact and in general, what will such incidents bring to our relations with Russia?

– I’d like to start from a near past. In the late 80s and early 90s of the last century, when the Soviet Union was collapsing, there were some hot  heads  that shouted absolutely ignorantly, we should not cross the Russian market. Their position was that Georgia did not need a Russian market and the main task was independence. Of course, we all agreed that independence was the most important thing, but at that time, unpatriotic slogans were heard that we should eat grass and starve, but to be free, to respect independence. . . Moreover, someone even wanted to impose an embargo on Russia. Here is what we got as a result: the Soviet Union disintegrated, we gained independence and the famine began. We all remember those horrible years when there was no bread and no electricity. Now why I say all this: Georgia, despite a rather bitter experience, which, as a rule, should have been a good lesson, could not draw conclusions; We, during this time, unfortunately have not been able to weigh and see the mistakes that have led us to face the greatest state. Generally, the goal of diplomacy is to turn the enemy into an ally, or at least to reduce the threats from it. What are we doing? We are doing everything we can to enter a deeper geopolitical impasse. As for the specific fact and the protest over the visit of the Russian journalist, many there may have really sincerely thought that he was doing a patriotic deed, I can not rule it out, at least you can always make a mistake, but for me, protesting in this form is unacceptable. Throwing and insulting eggs is not the behavior of 21st century civilized people. This one. And second – if a man hates the country, will he go there to celebrate his birthday? Wealthy Georgian parliamentarians or ministers often go to the Canary Islands to celebrate their anniversary or some solemn event. Naturally, the question arises – are you going to celebrate a birthday in the country you hate?

– What do you think about the assessments of government officials? From the Prime Minister to the Speaker of Parliament and members of the parliamentary majority, everyone has condemned this fact. By the way, Irakli Gharibashvili made a careful statement. He said that this time they did it against the background of the fact that the country is partially open to tourists, no, and everyone knows the importance of tourism for Georgia. . .

– I think the government has taken such a position with the sole purpose of confronting the opposition and using the incident to marginalize it, otherwise what are they actually doing? They have been at the helm of the country for several years and have not been able to go beyond the Abashidze-Karasin format. As for Gharibashvili’s statement and reference to the economy, as you know, the GEL is depreciating day by day and one of the reasons for this is the lack of tourists against the background of the pandemic. The question arises – who are our main tourists? If anyone thinks that American millionaires will come to Georgia and have a rest, they are very mistaken. They, we all know where they go. . . Now let’s take agriculture: what is the result of the fact that the price of grapes has dropped in recent years and the Kakhetian peasant does not get any fruit? Or, as a result, wine exports are more or less doing well? It is not allowed to throw eggs in the street and the mother curses the person. I am not saying anything about the fact that the next day Griboedov’s monument was insulted. By the way, do you know what that reminded me of? If Guram Petriashvili was organizing rallies in his time, let’s take a monument to Pushkin. . . In my opinion, this is savagery. Form and content are very important, so one should not discredit the other. This one, and the other – if you ask me, in the current situation, the anti-occupation rallies should not be held even at the hotel, but, first of all, with the Ministry of Reconciliation, which is not doing anything. Well, can someone tell me what they are doing, let them give at least one example, what they are doing for the war, so that there is even a slight shift in the normalization of relations with Abkhazians and Ossetians.

– By the way, recently, Sergey Shamba said in one of the interviews that there is much more political radicalism towards Abkhazians and Ossetians in Georgia today than ever before. Is this an adequate assessment?

– It is true, because what we are doing in this direction is unclear. The only thing that is done “successfully” is the performances, which we periodically organize with the villages on the verge of conflict and shout: “Russia is the occupant!”. Result – zero. This is exactly the indicator that there is no Georgian diplomacy. Unfortunately, today Georgian diplomacy is at the level of throwing eggs, insulting monuments and bragging that it turns out that we threw coffee at the occupant with a tail. Well, I’m very curious, if Putin’s turn something over tomorrow, I’m saying in an idea, and giving the order, let ‘s bring the barbed wire to the hill, who will be our helper, who will protect us or what? With eggs? As for the international partners on which some have high hopes, I have not heard even indirect calls from them that Georgia should be uncompromising with Russia. Yes, they say in the West and they always emphasize that they support our territorial integrity, but they also tell us that it is necessary to normalize relations. This is obvious and, in general, these calls should be made as well. It goes without saying  what kind of  Georgia is a headache for the  West.

– What is the solution? What prospects do you see for having a more or less pragmatic foreign policy in the future?

– I have been a professor for more than half a century, I am constantly dealing with students and I see that every year more and more illiterate generations come, the level of education, quality and class is lower, so unfortunately I can not say anything good about the future. I’m pessimistic. As for the foreign policy and the necessary changes in this direction, I think, first of all, it is necessary to reform the domestic policy. Only then can we think of other changes and transformations that are also necessary, however, until a thorough study of political science as a subject begins in the country, it is self-evident that we will always have a shortage of professional, knowledgeable people in the ruling elite. What we have today and what people rule us is a clear example of this. Throwing eggs in the street and cursing is called politics. I am not saying anything about the fact that biographical, inexperienced people are called politicians. . . I do not believe in such politics and patriotism. I do not believe in achieving a better future with such approaches. . .