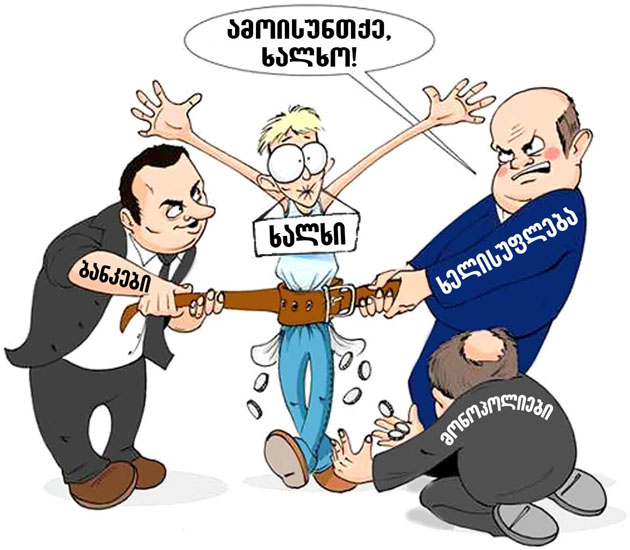 The year 2020 should be a turning point in Georgian political reality. Exactly this year it should appear whether after 8 years of power the government changes or remains the same. European and American partners have practically categorically demanded that the government be changed (who listens to them, but still), and the ruling team is not going to step down. Let us also say that Russia, which appears to be interfering in our domestic affairs and creating political weather, has not yet appeared, and we doubt that Russian officials will not appear or comment, and that this pre-election news will be left unanswered by the Russians. This, of course, is not a guarantee that both the government and the position will not begin mocking the northern neighbor to please the West: I am your supporter that’s why I am using bad language against Russia.

What is most evident in Georgia is that politics is a dirty business and an art of lying. So how can you run a country for 9 years, drown people in blood, and then shout, ‘Want to return to power?’ Or how could you be 8 years in the head of the country and make your voters a beggar in the literal sense of the word? But no, gentlemen, these people will come again to you, to us – to everyone, and start gracelessly stating that the future will be better than the present. But now the opposition and the authorities have no time for the people. They decide through what system the parliamentary elections for 2020 should be held and how they can get to parliament as easily as possible.

According to the opposition, in the case of a proportional system they will have a greater chance of coming to power or forming a coalition government. The authorities are convinced that the mixed system will leave them in the majority and therefore will not give up. Let us also say that the opposition has cultivated an old circle of acquaintances, and once a day American congressmen, who we suspect were fed up with Georgian money during the Nationalist era (in PR), send a letter to the government calling for more democracy. It’s funny when you’re supporting the Nationals and talking about democracy. It is ridiculous from the point of view of people, otherwise, if you ask Nationals, shooting  people in the streets, declaring a nation criminal, and in general everything they did was closely linked to democracy, and it has never been before or since.

Here’s what the congressmen are thinking about, they don’t care, as it is about their prosperity. Otherwise, have no doubt that if the same congressmen call on our government to blame Russia, there will be line in front of the microphones, they will compete each other to be more critical of the northern neighbor and thank those congressmen.

But now the situation is different, if you believe the same congressmen, one foot of the government chair may be broken and it is easy to change the shattered chair. That is why, not four or five congressmen, but even if President Donald Trump says in a live that election in Georgia shoul be held through proportional system, the Georgian Dream will not listen and say: why the billionaire president is interfering in our domestic affairs? That is to say, one billionaire will not let another billionaire get involved in his “business”. Now, those who think that the same Trump and Ivanishvili are not doing business in their own country and not earning extra millions have been very naive.

What is interesting is that neither the American side, nor the government, nor the opposition make any mention of the voters. That is, no one says: let’s first ask people what and how they want and then decide. No, gentlemen, they want the law to fit their own wishes and then the electorate will have to choose authorities like they have determined: the opposition will surely say that their supporters have been out on the streets for weeks demanding proportional elections, but sorry – 50 people are not the whole population of Georgia. Let me say for the attention of the Dream: not even 70,000 employed people are the whole Georgia. Georgia is in those villages that the previous government did not remember or the current one; In regions where even normal garbage bins do not exist, hungry people will find a livelihood there. Georgia is in the hearts of hungry people who are starving themselves all day long to save food for their children. This is Georgia, but you don’t want this Georgia. You do not want this Georgia in the pre-election period, but after the elections… let them dye till the next elections.

After acquiring independence, I think it was the only time people were asked about their opinions and a referendum was held. Since then, the government has been altering the law and the plan of action to make it as fit for themselves as possible. Paradoxically, this view shows that most of the democracy, the democracy for the people, was during the presidency of Eduard Shevardnadze.

Saakashvili established a real dictatorship – fighting with fire and sword against anyone who was not on his side. But the current government simply does not shed any blood, otherwise it is not much different from the “National Movement.” By the way, numerous members of the National Movement are still on the high positions, still ‘striving for people’. He has been forgiven for what he has done in the past – and he will be forgiven for what he will do in the future too. This is because such people have no honesty, they know how to act on the masses, how to deliver the desired result to the government, which is why they are liked by the government the most.

If the government and the opposition ask the voters which system or which government they prefer, voters will deny the both of them- neither the “Dream” nor the “Nationals” – even categorically. “European Georgia” should not be happy with this conclusion, it is the “Chinese National Movement” and it should not have any hope of people’s support. That is, in fact, the electorate wants neither one nor the other nor the third. It wants a new party to take care of the people and the country, but … it would be almost impossible to elect one out of so many parties, it is not only the fault of politicians, it is our fault as well. The demands of Georgians were reduced and we went to the stomach, only to the stomach. They made the nation so miserable that when a person goes out in the morning his only problem is to bring enough food for his hungry children to feed them at least that day. This is a bitter reality and … this is the reality that is advantageous to politicians. If people become materially strong, they will not come out to streets tyo participate in the protest actions for money, they will go out with non-material demands. And this is a dangerous, very dangerous, paradox of the Georgian reality, if you ask the government for anything other than food. But paradoxes are not liked by the authorities.

Well, what can I tell you – elections will come in a few months, so that no one will ask us anything, we will come to the ballot box and make a choice, which we will surely regret, as I repeat: There is no power today that will take care of the homeland and the people. Yeah, some will come by themselves, some will be forced to come, but it doesn’t matter, there will be one result. And we will continue to live a lie for the next four years, a lie we choose on Election Day ourselves.