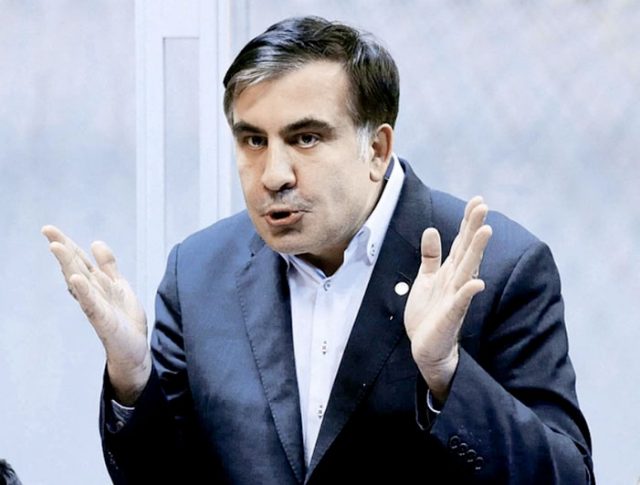 Appetite comes from eating, – for this case it is said. As seen Saakashvili is not satisfied any more by the Ukraine with 50-million population and now wishes to demonstrate his reformative talents in the United States of America. It is not our joke, Misha, excited by his new position, started to teach Americans: Cancel your police, create a new one, and the country will be calmed down.

After Georgia’s Rose Revolution in 2004, I became president of a failed state. Law enforcement agencies functioned like criminal gangs. Officers demanded bribes, trafficked narcotics and weapons, and worked for political and business elites as a mercenary security force. Georgia was a textbook example of “predatory policing”: Police did not perform the basic responsibilities of ensuring public safety, instead enriching themselves and their patrons by extorting citizens. A 2003 survey found that just 2.3 percent of Georgians held a positive view of police. In just a few years, we transformed this—offering a model for other countries, such as the United States, struggling with police reform. We abolished the KGB-like ministry of security, canceled the traffic police and ten thousands of policemen released from offices. The Traffic Police was substituted by Patrol Police, set new requirements to the new personnel, new rights ad responsibilities. When establishing order in the police, we have priority to quality, instead of quantity , reduced the number of officers rom 56 thousand to 33 thousand, Violent crime fell by 66 percent after reforms were implemented. We arrested people in their own houses, and due to such nontraditional practice we broken the old Soviet system. After that Police is not pressing people but protect them, Instead of bribe, receives respect. By such changes and non-popular practice we deserved international recognition.

Saakashvili apparently “forgot” that he had given the police absolute power and told them directly that everything was forgiven, after which some law enforcement officers believed that everything was really forgiven in the country and the number of people killed on the street doubled. Police was involved directly in the street case disputes, while the government was quietly packing all this up, linking all the murders to criminals, and presumably Saakashvili no longer remembers Gamtsemlidze, Girgvliani, Robakidze… He was not interested in their fate and is not interested especially now too ,when teaching Americans how to behave.

Attempts to neutralize the threat posed by police in some U.S. cities are an attempt to transform one small country, but unlike post-revolutionary Georgia, most Americans do not agree with such radical measures against the police. When I was elected president, the people of Georgia gave me a mandate to demolish the old system, which no longer worked for the people. The government has come together to achieve one goal. Distrust of the police is a symptom of the widespread belief that the system is built in such a way that it only protects the interests of the elite. If we were able to solve this problem in Georgia, even the Americans could solve it – Saakashvili said and told the Americans that your system, by chance, only protects the interests of the elite ?!

During Misha’s rule, the elite was a relative of the Nationals, and it was he or the political elite who sacrificed Girgvliani’s life. The political elite was spending time in the nightclubs, and the cocaine if not fit in one nostril , fit it in the other. This was a reality in which we lived and I am sure Americans too know it well.. However, It was just in Americans, interests to declare all our nation as criminals (and |Saakashvili officially announced: Georgian nation has a mentality of criminals), it was the vey west that wanted us to live in fear and one man to decide everything.

The West’s cynical attitude towards Georgia is also evident from the fact that a man sentenced to imprisonment under the Georgian Criminal Code and is in search, the west accepts widely on the political arena and it happens in conditions when if they dislike any president, they persecute him and even says no for his liquidation.

For instance Libyan President Muammar Gaddafi is enough, a man who has been declared a dictator by the West and has been easily liquidated. After liquidation of Gaddafi, there is constant unrest in Libya. Instead, the resources are “arranged” which are owned by this country and, they are distributed between Americans and Europeans. Georgia is not rich by natural resources, but its resource is a common border with Russia, so, Georgia, as a territory as a springboard in Russia’s adjacent anti-Russian space was needed to them and received by hands of Saakashvili, and not only received but even caused him to star war with the neighbor against which all the civilized world abstains itself from conflicting. They fooled Georgia, caused it to shoot start war. As a result we lost territories, we were forced to destroy political, economic, human contacts. Instead Saakashvili was declared a hero, no matter ow he acted in Gori and if not American pampers, what could happen with his trousers… Yes, pampers together with a bulletproof vest he had.

Nobody can count even one country in Europe where even not a former president but an ordinary former minister is in search and at the same time he occupies a high position in another country It is not a good manner in these counties, they will not date themselves to do so in relations with “strategic partners” to have “searched” in a greenhouse conditions But, Georgia means nothing to them , so, not only Saakashvili but Adeishvili too are in their service and say to us proudly – Saakashvili helps us in implementing reforms

By the way, we mean reforms which were followed by murdering thousands of people, the reforms which turned the penitentiary facilities into a slaughterhouse. Nobody, none of our foreign partners and human right defenders have a question, why hundreds of prisoners died in jails in Saakashvili’s time and why now this indictor is reduced to about twenty. Because they know well than others why and what was happening there in that period, because just they encouraged Misha to kill the nation, because an unconditional obedience to the west was the main purpose for them, while a TV-live killing of people (remember the tennis court special operation) was an ordinary practice . What would be the reaction of the American society if Girgvliani’s story had happened there, on the background of the current developments here. While here the killers were in a separated cells and all comforts were created to them, including women and time-spending in the best restaurants.

By this step, it is seen well that welfare of Georgia is not in the interests of the west. Neither the Ukrainian leader “Servant of people” Zelenski is interested in what Georgians thing about him, because, he was brought in the power by the west by condition of serve for it, because a joke’s duty is to please the king. And, now the Americans are kings in Georgia and Ukraine.

Please be sure also that if appropriate conditions are created the west will by all mams support Misha’s return back to Georgia . to more so that the west has already tested him in job and knows well that he will be their real slave and may at any time when the west wishes, make harm to Russia . Misha will do all the west wants to this ed, that is not made by the current government and, then we may see Misha as a won commander on Rustaveli avenue. No mater if Misha’s comeback will cause a public waving . Catching fish in muddy water is easier as already happened in the past and may happen in future too. The main thing for them is to implement their interests, while local disorders and civil wars are not problem for them, because as less the number of people as easy to control them.

I cannot say what a reaction will have the Georgian delegation in conditions when during visit to Ukraine they may see Saakashvili at the table of negotiations. I thing they overcome this inconvenient because of fear to our western partners as happened in many cases in the past and then justify this as if we cannot infringe in the local affairs of other counties. And, nobody will recall the case when the US Ambassador forced our officials to run like children, to change Constitutions as Mishists want and the case of last week – Meeting with General Prosecutor, with handing over the Code of conduct and warned – Obey us.