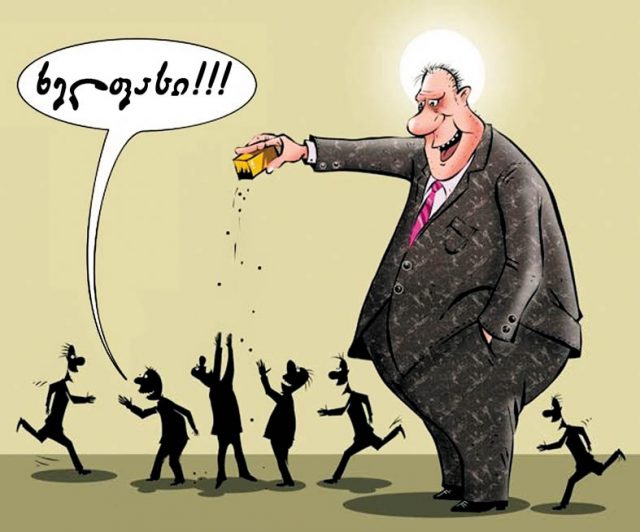 Mikheil Saakashvili allowed the West to conduct experiments on the population of Georgia. Numerous drug experiments were conducted in penitentiaries, and prisoners often did not know what medication they were taking. Georgian prisoners were ordinary test rabbits, companies pay millions to test drugs and people agree to participate in it for money, but with us it was all free – drugs were tried on prisoners, and Saakashvili’s team was receiving money

You  also remember that tents were set up in several places in Tbilisi during the nationals era, and if Saakashvili’s televisions covered them in one way or another, then they forgot about it and the Western ambassadors did not bother. People were sitting in tents, Rustaveli avenue and  the central entrance of the President’s residence were blocked and people forgot the story so much that their presence and protest made no sense. Now several tents have been set up in front of the parliament and the West has a story to tell.

The aim and reason was to sow political nihilism among the people by  the “National Movement” and the West. The electorate had to make sure that there would be no prospects and charms for a change of government. People had to be convinced that either the Nationals would be in power forever, or whoever came would change a lot of things. This would automatically mean that people would not come out to the rallies, thousands of rallies would no longer take place and people would become robots – they would wake up in the morning, try to earn money for food, buy food with it in the evening, eat it and repeat it the next day.

What happened after the change of government? The hopeful population went to the polls in 2012 and staged a silent revolution, frightened people voted against the Nationals and waited hopefully not only for their own well-being but for the regime to be judged, but neither came out nor the other – neither the regime was judged nor so cherished prosperity came. To say nothing of prosperity, we slowly started to go backwards, then pick up the pace and now we have such data – each new day is worse than the next. It turns out that the “Georgian Dream” could not change anything, but the fact is that the “Dream” has exactly the same patron  that the “National Movement” had. This was and is the plan of the West and, unfortunately, is being implemented successfully.

Judge for yourself – how many people want to take to the streets and be at rallies today? When was the last time that tens of thousands of people came to Georgia voluntarily? The largest rally held by the government (this is also a Georgian paradox) is dated December 14, 2019. Then the management team made full use of the administrative resource and it appeared that Freedom Square could accommodate the number of employees in public services. Had it not been for the fear of losing a job, it could be said with one hundred percent accuracy that the number of people there could not have gathered, but the prospect of staying without food, with empty  stomachs, forced  public servants to come and show the government to the West that it has a large army of supporters. However, if the previous or current government had managed to provide a decent pension for pensioners, they would have had only their support, more than half a million people would have happily stood by it, and this is a strange event for the Georgian reality – if everything started with youth, the students, now  pensioners are in front of  movement  They are pensioners, but they are also tired of lying, they have been deceived many times. Cheated always and by everyone.

We can already boldly say that we are sick by  political nihilism. How many people do you think like the government? Very few, more less   like the opposition. Besides, what kind of opposition, in which more than 20 parties are united – the whole political spectrum is there and they do not have people, they cannot collect the necessary number for rallies and their rallies are a silly topic. I have already told you about the last rally held by the government and the notorious third force is nowhere to be seen. Someone who will follow the people should appear on the political field, but it will no longer be as simple as it was during Saakashvili and Ivanishvili. Both had abnormally high support and both squandered the trust limit, people will not just following them, people will not voluntarily following anyone.

Dissatisfied is not only the people who are on the streets even today, the whole nation is dissatisfied, but people can not say it out loud. The reason for not saying it is not just fear – the majority simply does not see the meaning of the protest. No one seems to be followed, trusted, believed. Finding such politicians seems impossible in today’s political spectrum. Most interestingly, neither the government nor the opposition want to lose their niche, they feel comfortable, have no income, and do not care about their children’s education. Let me give you a simple example: did not the largest part of the opposition enter the parliament? Fearing a fine of 1000 GEL, absolutely all of them (even Buba Kikabidze) filled in the property declaration and at the end of each month, absolutely all of them have a salary of up to 4 thousand GEL. Only this salary can be used on the street, to drive quietly in cars, not to touch any restrictions due to the mandate of the deputy and the curfew. Nobody pays attention to one seemingly insignificant detail: if the members of the opposition come out and shout at the last vote, – we do not want mandates, do not even count our salaries … Can you not tell us, gentlemen and ladies, on which account your salary is transferred? Did the Parliamentary Finance Service dream of your bank account? No; You have turned these accounts into finances yourself and now, in the eyes of the people, you are shouting – we do not want a salary. If you did not stay, you would not submit any reports and no money would be credited to you.

After the resignation of Giorgi Gakharia from the post of the Prime Minister, the news spread on social networks that the ex-Prime Minister will form a new party and people will follow him. Gakharia was not even retired when the opposition, in the literal sense of the word, was kicked out because they felt threatened by the loss of the above-mentioned niche, so they separated in advance, were expelled, and were doomed. . . As for the excitement of a part of the population and the photo of Gakharia liked by tens of thousands of people on the social network, let us simply ask: what did Gakharia do during his presidency that made people follow him and trust him to the end?

Did the crisis manager show special skills during the pandemic and manage the processes? Did he make life easier for the population, give them relief, order them to build new factories and employ people? If the national currency had not depreciated by 16% last year, would anything have been done? Have the relevant services been instructed to take effective steps? Has  Georgia become a major player in the region? Did he try  to regulate  relations with Russia at some level? Did he convince the American and European partners to do anything that would benefit the population? Unfortunately, the answer to all the questions is no, but it is not just about happiness. The same questions will be answered in the case of his predecessor, in the case of his predecessor, and in the case of Gakharia’s replacement. People are changing, the environment is not changing, nothing is being done that the population would assess as a step forward. Yes, the population only . . . I will tell you interesting figures: in January, the Georgian economy shrank by 11.6% and this is the worst result since 1994. It turns out that it is 27 years, we are moving forward, we have annual growth and progress … Put your hand on your heart and say: Do you understand something moving forward ?! . Yes, thanks for the 24-hour natural gas and electricity, but that the fifth of the 21st century is over and there is nothing else to say, this is a catastrophe, so we say the population must say progress, otherwise economic progress written on a piece of paper to see Europe-America will not be a big relief and this is a fact that is understood by all.

Just because of this people is sick by  nihilism and no one believes anymore. Parliament sessions are held, they pass some laws, but … Stop a hundred people on the street and ask them, which legislative change adopted by the Parliament during the last four years has had a positive impact on the population?  Probably, you have an answer, gentlemen, but, what people will tell you, you will know better than us.