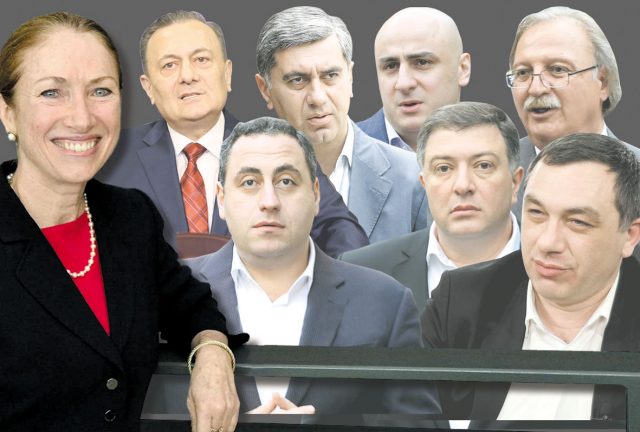 The European Commission has approved one more macro-financial assistance package with eight countries. The program provides different amounts of assistance to different countries, but a statement posted on the Commission’s official website states that in return for the assistance, the parties will make certain political, not just political, commitments to the international community: The Memorandum of Understanding obliges the assistant recipient countries (beneficiaries) to implement certain activities in the field of sectoral politics,  for receiving the second tranche. Reaching an agreement on the Memorandum of Understanding  and signing thereon, is an important step   for receiving the first tranche within  the frameworks of the program, that is predetermined by fulfillment of political conditions, among them,  in the fields of democratic principles, human rights, and supremacy of   law  . . .

According to  the Program, Georgia will receive EUR 150 million  at the initial stage, however, the statement spread by the European Commission, says that the   beneficiary counties will also receive the financial assistance from the International Monetary Fund. But instead of the taken obligations,  the EU Representation Office in Georgia will monitor the effective implementation of the democratic reforms. In the process of  monitoring, the  third sector (NGOs) acting in  the county  will actively collaborate with the EU Office

Note: The European Commission approved EUR 3 billion bailout package for partner countries in the spring of this year. Georgia also received “assistance” under the program, but the European Commission leadership said at the time that the country should make commitments to the West in return. This was soon followed by an unacceptable for a large public so called democratic reforms that in the idea seemed to serve to improve human rights.

What commitments does Georgia make today in exchange for EUR 150 million and what changes should we expect in the near future considering all the above?  These issues are discussed with us by a human rights defendant Nana Kakabadze.

– Mrs. Nana, the European Commission has approved recently a multimillion financial assistance package to eight partner states – Albania, Jordan,   Kosovo, Montenegro,  Moldova, Northern Macedonia, Ukraine, and Georgia. EUR 150 million is allocated for Georgia. The official statement spread through the EC website says that in exchange of this assistance, these countries undertake certain commitments, including, in the directions of  strengthening the democracy and human rights. What do these commitments mean and for what all this is aimed?

– The first and the main thing is  the following: The worst is that similar agreements are usually executed without a wide considerations, i.e. with bypassing  public reviews and discussions  . This, to  put it mildly, cannot be placed in the democratic  frameworks, because, at first, any decent  government  that understands personal responsibility, should consider itself obliged to submit report to the society; Second, it must understand that when the state makes certain steps in a manner where it intentionally hides information from the large public this, not less or more, destroys a feeling of statehood, in a citizen. Now, somebody may say that the state power is elected by democratic elections and has a relevant legitimation, but, by constitutional point of view, it does not mean that  the society grants absolute powers to the government. In General when certain initiations are originated in the state which are then secured financially too, and which may cause different attitudes in the society, I say nothing about doubts, the government should be interested itself,  in a maximal informing of the society in these initiatives, inn order not to violate  the main principle of democracy – supremacy of law and  of the will of the people. And, also because the information then  leaked from behind the scenes may have more heavy  effects for  the county and the government especially,  by view of stability. This is not duly understood or they do not want to understand it in the leading party, so they make some deals behind the people and this has already become a serious problem. I am not saying anything about the commitments, the fulfillment of which probably implies an increase in public dissatisfaction, which in the current situation, I mean the upcoming elections, may prove disastrous for the ruling team.

-.How can the public be informed today about the real purpose of the financial “aid” received from the West? What can be done to prevent these processes from going back to the people?

– The answer is simple – you just need goodwill, open media space and disseminate objective information. Instead of these “pocket experts”  who sit 24 hours a day on television and become almost TV stars, there must  be also other  means of expressing dissent and public discussion. In addition, any document, be it an agreement on funding or anything else, should be printed in the press and made available to everyone. By the way, the document of association with the European Union, which also implies a number of obligations, has not been translated into Georgian for a long time and is not available to all citizens. Whether it is today or not, I do not know. As for transparency, you – the journalists – have a very big role to play. For example, on this particular document, I would like several media outlets to address both the relevant government agencies and the EU Delegation to Georgia and request a written answer as to what exactly this agreement obliges Georgia to do and what changes are planned.

– Officially, these aids are for overcoming  the  crisis caused by COVID-19 pandemic . . .

– Interestingly, we think that they are helping us to overcome the economic crisis caused by the epidemic, and in fact the document contains some content that implies an obligation to carry out certain political activities. The question arises: what does overcoming the effects of the economic crisis caused by the global pandemic have to do with democratic reforms? Why do they impose on us  such a commitment in exchange for help,  if it may  be called a help, that is not related to a specific issue, such as, for example, human rights at all?

– What political tasks can be put behind the multimillion-dollar “aid” that the United States and the European Union have been providing for years, not only to Georgia, but also to a number of Eastern European countries?

-, It is difficult to talk about specific documents without evidence. That is why I say that it would be good if we request a written answer from a separate government and a separate EU representation. I have said before and I repeat now, no one gives us any help. We are given money and thus they buy our  government, which, as seems is not interesting in anything except for its narrow-partial  tasks. By  the way the  US Ambassador to Georgia Kelly Degnan declared two days ago: These elections are an opportunity for  the Georgian people to elect the more diverse and representative parliament. As a matter of fact, they say that  America expects a coalition government from Georgia. A natural  question arises: what is the main thing – what does Washington expect or what does the Georgian people expect? America should wait for the will and decision of the voters at the ballot box and only after that should some assessments be made. However, it seems that the fate of this election has already been decided and it is slowly being shown to the public. What else can be said? Soon, we will probably be told that Bokeria should be the Prime Minister, and his team members – represented in important positions.   Anyway, when you are forced to release Ugulava and Okruashvili  from prison and then, in fact, they are declared political prisoners, what should surprise you . . .? The external forces behind the current political agenda ended the test of forces in Georgia, when they first put an end to the process of restoring justice in its time, then carried out so-called cohabitation, and then completely reincarnated the criminal regime. Today they want to return to the power a criminal force that can commit everything and correspondingly, such a force will be  their reliable support here. Probably this is one of the “political obligations” that the current government is forced to take in exchange of multimillion “aid” . But, his is only my assumption and, it would be good if we demand specific explanations in writing both from the government and the EU Mission in Georgia

– By what means can Georgia get rid of this slavish, colonial situation, so that in exchange for 100 or 200 million euros, the country no more be constantly in captivity of some obligations?

– This, of course, is very difficult, and probably everyone will agree with me. Georgia has been on these rails for decades. This means that a radical change or attempt to change the agenda will meet with serious resistance from the very beginning, from both internal and external forces. However here is one outcome and this is obvious for everyone:  The political field wanted to be completely cleansed and a system fundamentally different with its ideological origins and postulates should be formed, which effectiveness is first and foremost determined by bringing the national and strategic interests of the country to the forefront. This is, theoretically, in my opinion, if not the only but one of the most realistic solutions.  But, in reality, implementing all this is a much more difficult and lengthy process and involves serious risks.