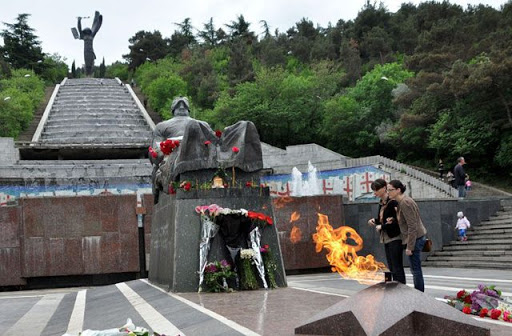 76 years have passed since the end of the Great Patriotic War. 71 years ago, on May 8, 1945, at the headquarters of the 5th Army of the Soviet Army in the Karlhorst district of the German capital, Berlin, at 22:43 Central European Time (Moscow time: 9:00, 43:00 Moscow time) An act of capitulation to fascist Germany was signed.

It was the bloodiest and largest war in human history, taking  the lives of millions.

It is noteworthy that the Soviet Union, with its multinational population under General Joseph Stalin, was able to reorganize the national economy during the difficult first months of the war, mobilize military equipment and warriors, repel the invasion of Hitlerites in the country, then go on the attack and destroy the enemy in his own bunker – Berlin .

The population of Georgia also made a worthy contribution to the victory over German fascism. Up to 700 thousand fighters were drafted from Georgia, 300 thousand of them could not return to their homeland. It can be said that such a sacrifice, in percentage terms, has not been made by any of the countries on whose territory the hostilities took place. Georgian warriors fought heroically on the outskirts of the Caucasus, in the European part of Russia, Ukraine, Belarus, the Baltics, Southeast Europe, the Czech Republic, Poland, Romania, Bulgaria, took part in the Berlin storm. During the greatest ordeal, the Georgian people, as well as other nations of the advanced Soviet Union, showed a heroic spirit, endurance, devotion, faith in victory.

165 Georgian warriors awarded the title of Hero of the Soviet Union, 44,700 soldiers and officers Awarded the Order and Medals of the USSR.

May 9 – Victory Day, the biggest holiday respected  and celebrated with trepidation in countries around the world that have suffered from fascism. Victory Day is celebrated for the 76th time this year.

The first day of the victory was celebrated grandly by the Soviet Union, with public marches, rallies, orchestras, and popular theater and film performances in all cities. Joseph Stalin, the inspirer of the victory over fascism, addressed the population on this historic day. Later, the Moscow sky lit up the victory salute – 30 barrels fired from thousands of anti-aircraft guns, and then dozens of planes displayed colored garlands in the sky.

The celebration of the victory won by the Soviet peoples together will always remain in history and will remind us of those bloody events and the destruction of the fascist invaders.