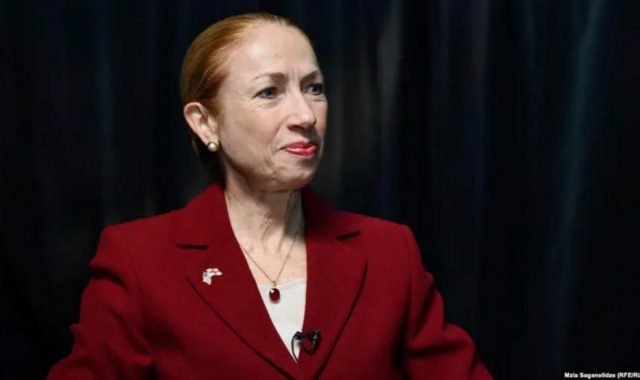 The US recently appointed Kelly Degnan as ambassador to Georgia. Before, we were “unaccompanied” – for almost two years the US had not allowed an ambassador with us, and the opposition on one hand, and the leading party on the other hand, were nervous about it Moreover, the opposition has accused the government: America should have an ambassador, but you are blocking it. This statement is very funny because “Georgia is blocking something for America” a miracle, and a miracle that is not happening. In short, Degnan was appointed ambassador and, not only interferes in , but manages the Georgia’s domestic affairs. Without her, the government is not taking any significant steps, and the opposition leaders agree with her even an intensity of going to the toilet – perhaps Kelly would look at us with support. We can’t say how many years elapsed since the US ambassadors to Georgia runs our country, but everything has been clear since 2003. To calculate roughly, it has been 17 years since Americans established their dictate over Georgia and it is exactly the will of their ambassadors on how Georgia’s domestic and foreign course will go.

Let’s first talk about how Degnan reacted when she learned that the EC Ministerial would be held in Strasbourg instead of in Tbilisi.

“If ше шы decided to have the event in Strasbourg, I don’t think it would be an unprecedented event. It has been a precedent before. As far as I know, Russia did not intend to clearly state whom it was planning to send as head of the delegation. I cannot imagine how the Georgian authorities would have been allowed to enter Georgia by a person who repeatedly violated Georgia’s laws and completely disregarded them upon entering Abkhazia. This puts Georgia in a position where I cannot imagine how it could allow to enter. This is a decision of the Georgian authorities, but, to hold the event in Strasbourg, is not an unprecedented one” – Degnan said.

This is not the most interesting thing the US ambassador has said. According to Kelly Degnan, the main way to deal with Russia is through the Geneva format, i.e. Georgia and Russia should talk in Geneva, not in Russia or Georgia. By this statement, Degnan said that Georgia is an American hostage and has no right to make decisions independently. By this statement, the US ambassador reiterated that even if Russia’s top officials agreed to come to the negotiating table and talk to Georgian leaders one by one, they should not be allowed into the country. The US ambassador says that neither our nor the Russian delegation will be allowed to speak face to face with each other. Nobody puts question, why is America so afraid of the Georgia-Russia face-to-face talks… again for fear of America. This is what the US ambassador dictates as our foreign policy agenda, how she explains to us who may come to our country and who no, whom we can meet, where, etc.

Now let’s look at the domestic news. Although majoritarian lawmakers have refused to run in the proportional system for the 2020 parliamentary elections and have expressed the will of the electorate, European diplomats, led by the US ambassador, have strongly urged the government to change its position and adopt a law that is not analogous to the world. Yes, it does not, because it is about 110/40 or 120/30 systems, but this is not happening anywhere. Simply put, such a proportion is nowhere to be found, but, do you know what does it mean in real? The law once failed in parliament can no longer be introduced and therefore they try to paint everything as if it were a new law and in fact the system is completely proportional. So, what would make sense if 10 municipalities would elect one majoritarian? What to say about 10, when the MPs fail to take care of even 1 municipality, so it will be a mere formality, a formality to deceive themselves, deceive the law and, most importantly, deceive the voters. This is not just a blatant interference in domestic affairs, it is a direct attack on the Georgian constitution by the US ambassador and European diplomats applaud it. It is a paradox, but the fact that not one, we repeat, no Georgian politician came out and said: What do these ambassadors do, why do they interfere in our affairs? In contrary, the government and the opposition is doing everything possible to lick the Europeans and it doesn’t matter whether that place is clean. Most important for them is that they show loyalty and obedience with this.

Medal has the other side as well, and let’s imagine for a second that the laws are being changed at closed-door meetings of the lawmakers, and if any Russian official say that the Georgian political spectrum is in crisis (it is in crisis in fact), what would happen. First, again Kelly Degnan would stand and say: Russia interferes in Georgia’s domestic affairs. Then European diplomats would start calving and then the opposition or the government would hold a briefing separately from each other: Look, Russia interferes in Georgia’s domestic affairs. But, in fact, Europe and America not only interfere in our domestic affairs, but they control everything, and our officials are only occasionally allowed to decide our second-row domestic affairs.

It is interesting that since 2003 the same America and Europe have not forced the “National Movement” and Mikheil Saakashvili personally to change the legislation?! Wasn’t that law unacceptable then? Didn’t Misha lose this election in 2012 by this electoral code? What happened? What has changed? If Saakashvili was in that time under their full dictate and even started war when it was needed, why now they fail to force this government to agree on a war again? We remember there were several attempts of it. But, the current authorities were wise and did not fire. This is probably the main reason why the current US and European governments do not want to give up power to people who do not speak Russian with a gun-language and are therefore going to change them.

Elections in Georgia cost about $ 50 million, and those elections will probably be the most expensive to hit a hundred million like nothing, and so it might be better not to hold elections at all. When the election year comes, instead of cutting down on the laws, ask the US ambassador who she wants to be in power and appoint prime ministers and ministers. That is how we will catch two rabbits – officially we know that we are slaves of America and will save money, on the other hand. Neither will people be bothered by the idea of who to vote for or the pre-election promises – nothing will work out, anyway. The ambassador will appoint the authorities and then announce: Peter or Paul will rule over us for the next four years, and we will rule over Peter or Paul. We no longer want slavery wrapped up under the auspices of a strategic partner, better to speak the bitter truth and everything will be ended so.

Let’s no stop with a joke and, say how many times has the opportunity of the face-to-face meeting between the Georgian and Russian officials been eliminated over the last half a year, due to a rough interference of American and European officials? Is not it a fact that a fact that the West is most afraid of the face-to-face Georgian and Russian negotiations to find a solution that would be acceptable to both these countries? But, if it happens, a possibility of our entry to NATO, slavery and American ambassadors’ dictate here will be ended and, as a result, our NGOs remain hunger, t7he west-oriented parties stay without grants and everything will be arranged by the order as our citizens want and is better for the country. But, hen it was when the west was considering the interests of the people? If it is so, it was Saakashvili who several years ago declared that a majority of voters want NATO and EU integration, but they say – not now, you are not ready for it. And now even one third of the NATO supports remain and, the west moved to slavering the political spectrum

What to say? They do well this their job !