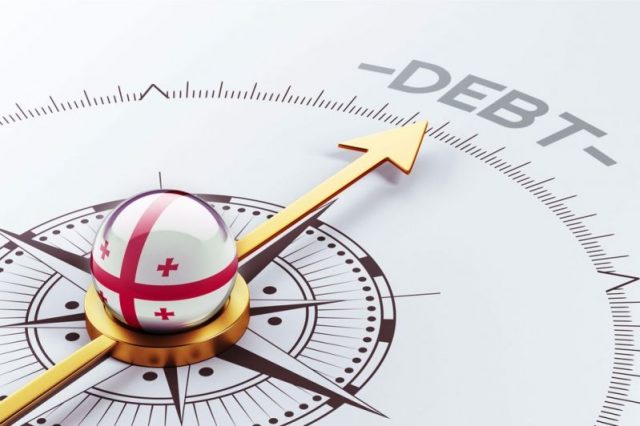 When the government declared State Emergency and said – we are forced to take on foreign debt, no one objected. People were scared by the TV pandemic and did not pay attention to it. Since then a lot or a little water has flowed,  we even heard that it turns out we owed more than we needed, and that money went to infrastructure projects rather than pandemic measures. Nor did anyone say anything about it, and in this case we think the population has lost the ability to resist. People no longer has the desire to shout, to protest. Everybody thinks about their stomach because the stomach is supreme for the majority of the population and it is neither surprising nor frustrating. It is really  difficult to hear when you get home, your child will tell you – he is hungry, and that you will answer: I am coming from a foreign debt protest and we will not have food today.

According to official data, our foreign debt was 20 billion GEL by August this year, and increased to 22 billion at the end of September. Attention! Question: How and why  2 billion added  in one month? Apparently, the government took the debt again and did not disclose it. The second version is: We take a loan with such interest, 2 billion is added per month (for example, in case of 10% interest rate, we get exactly this figure). We owe the most to the Asian Development Bank – $ 1.412 billion, or more than  3 billion GEL. But, this is not the main thing. The main thing is that, roughly speaking, each citizen of Georgia, who was born yesterday and will be born  tomorrow, owes about 7 thousand GEL. The medal has another side as well, and those who died yesterday and those who will die tomorrow, at first glance, take this debt to the grave, but actually leave it to their children and grandchildren, because this amount is to be paid from our taxes. . .

The Prime Minister said: there will be no complete closure and declaration of a state of emergency, because the economy can no longer tolerate this, we will only introduce point restrictions. All this can be called the recognition of the century. The government tells us openly: you can not save us, we have no money and there is no other way, you have to die. Yes, death  is a solution, because if strict restrictions are not imposed, if the current increase by geometric progression of the COVID-cases is not reduced we will face the situation that happened in Europe and America continents. We are not saying anything about Asia, where the virus has cut off almost entire areas

And the population can not be saved for one reason only: most people can not create wealth and can not make monthly savings. Do you remember the “Notorious communism”? There was no family that could not save a little money every month for a black  day. Then these “black days”   ended either with the purchase of new furniture and a car, or with the whole family spending the summer at sea. And now, not postponing the savings to the end of the month, they are focused on how to survive  from morning to evening. Daily food problems have been encountered by many people. Only 10% of the population manages to defer some money for the future and that is exactly that  10%  who tell us now: vote for me and choose me. It does not matter if it is the government or the opposition, practically we all saw it in power and everyone had a chance to change something for the better. In 2020, if you are reminded that you have electricity and natural gas 24 hours a day (water supply is not available in most regions of Georgia on a 24-hour schedule), what should I talk about ?! Foreigners are going to make a ropeway to the moon, they are working in this direction, and for us, having electricity and gas, is an achievement. Now someone will say we were a banana republic, but, did you know that in the banana republic a box of bananas costs 2 dollars and with us 120 GEL? You may protest:  It is the homeland of bananas. But, if Georgia is the homeland of grapes, why do we import 32 million dollars worth of grapes from Armenia in winter ?!

Let’s get back to power again. The opposition does not protest against 2 billion GEL, which they shoved us like cuckoo eggs, in one month. Who, Here are two versions: First – these money is borrowed from such countries, that it will not be good for the opposition to make a nose, or, the second – the opposition is not interested in it, it is just arranging its wellbeing by elections, for the next 4-year period

February 26, 2021 will mark a year after the registration of the first case of coronavirus in Georgia. Then there were tougher restrictions, a curfew and His Majesty’s anti-crisis plan, which was supposed to make life easier for the population and, most importantly, at least have a minimal positive impact on the economy. There is no talk about the failure of the plan. We don’t even know how to make a plan, let alone implement it. Maybe you can write a plan that is actually better implemented! Well, at least you didn’t go down without first explaining yourself (what did they do?) And at least write the plan in such a way as to break the stone, so that you have something to say: look, we wrote, but I couldn’t do it. We don’t even know how to make a plan that will help the country. We are talking about this one specific case, and you can imagine what happens when it comes to the long-term development plan of the state. Maybe then they will start guessing over a cup of coffee. But he also needs talent, and I don’t think there is anyone that talented in government.

About 35 thousand GEL is required for creating one job place  in Georgia  (this is also calculated by state structures). And, with the 2 billion GEL that we added to the debt in one month, 57,142 jobs could be created. More than 50 thousand families could be provided by jobs , and this is your main promise – to eliminate unemployment.

It is a simple axiom: a strong family is a guarantee of the strength of the state, and this is exactly what our “strategic partners” do not want. They do not want  because enslaving a strong state is the most difficult, often impossible. . . Therefore, it is better for people to “think the stool is 20 -tetri and then it is honest.” We are not going here, we have already arrived and one half of Georgia is trapped in the garbage bins, the other half works from morning till evening in order to bring home  “20-tedtri” in the evening.

Yes, elections must be held at the cost of everyone and everything. After all, several thousand people have already been infected, special polling stations have been set up for them and they will vote there. Nor is it a problem that no one wants to be a member of such a commission, and if so many thousands of people are brought out into the city to vote, new clusters will be created. The main thing is that specific people get into the parliament and then teach us to be smart for four years, and. . . They will not accept the laws because, as a rule, a singer, pianist, basketball player and rugby player should not know how to relate to the laws. This – at first glance, otherwise, the laws will be introduced exactly as these 2 billion and . . .  Interestingly, these 2 billion are added every month and we are going to ensure that the country declares bankruptcy, or  this debt is added gradually, in order to remain in debt until the end of our days and not think about moving forward.

As of today, the only real recommendation left is – Strengthen the prayers, prayers! We are hoping in the Lord, no other salvation is really seen