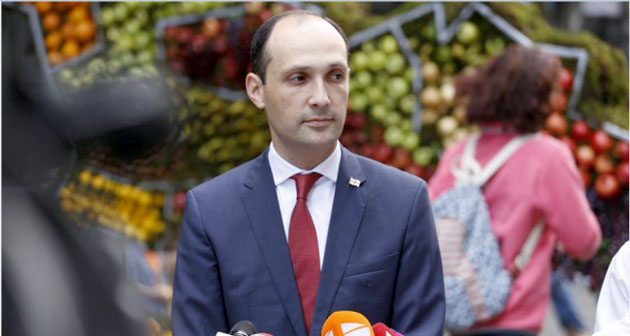 Banks of America sold gold that had been inviolable since the 19th century. The world is waiting for the next crisis and the panic is so great that the British bankers have even hired Boeing and the security guard to protect the gold bands stored in the US Reserve Bank. Consequently, Georgia is no exception, and it is already clear to everyone that  National Bank’s allocation  of the $ 80 million that went up last week is nothing but a drop into sea to stop long-term currency depreciation  It is not the fault of anyone, nor the fault of the authorities or the opposition, it is the fault of the universal background and any expert will confirm it.

This is exactly the case when Bidzina Ivanishvili has to say something to make sense, but Mr. Bidzina does not appear. Notwithstanding this, neither the government nor the opposition will be hurt by the shooting of a single stone in Russia’s garden and of course the depreciation of   GEL largely to blame for its northern neighbor. Someone asks: What is Russia doing about here? If we listen to our political spectrum, it is in the middle and not the main culprit. The case  is that the Georgian economy is largely dependent on Russia, and when the situation in Russia collapses, the GEL is devalued. And now, even under international sanctions, Russia is attacking the Coronavirus, as it is in other countries, and as if that is why our currency is moving towards the bottom. Well, to tell the truth, the depreciation among the regional currencies fell most to our GEL while Armenia is more dependent on us than Russia. Well, not only Russia’s fault has been the depreciation of the GEL and the reasons we need to look for in our economy as well, but no – it is easy to blame Russia, because it is a game in one goal , Russian politicians does not answer us, and thus, we say freely what we want.  If you look at the recent developments, if anything bad is happening in Georgia, the authorities and the opposition are “blaming” the Russian factor. Is the product expensive? Russia’s fault. Currency depreciated? Of course, it’s Russia’s fault. Can the authorities and the opposition disagree? So if Russian politicians don’t comment at all, it’s still a fault. Don’t be surprised if Russia’s blame for the increased number of quarantine violators is soon to come.

Now let’s look at the other side of the medal. Levan Davitashvili, the Minister of Agriculture, practically stubbornly reiterates that there is a stockpile of product and especially bread flour in Georgia. He says on various television stations: “Don’t be afraid, we have supplies, and if necessary, we will refill.” What is interesting is that Mr Levan Davitashvili has never once been convinced that 90% of the flour we bake comes from Russia and that we hope for a northern neighbor even in times of crisis. Flour does not  smell, Mr. Levan, or, if to tell a  truth, do European and American partners get bored? And how do you know whose flour feeds most of the European countries? That’s right – they don’t criticize Russia, and most importantly, unlike us, they don’t blame everything, they try not to play on the nerves of the biggest country in the world. And this is because they do not put their own populations at risk of starvation, nor leave it alone against  coronavirus. How do you think the same European countries did not list America as a strategic partner? But they do not bother – ours is sweeping across the ocean, but they try to protect their neutrality as much as possible and do as their country will.

I would ask the question now – where is America, but they call me immediately: the strategic partner has already allocated $ 1.1 million to fight Coronavirus. That’s about four million lari, and let’s just say that the state has already spent more than 10 million lari to fight the coronavirus. That is, the strategic partner calculated strategically and allocated only the amount enough for half month only. But if all this goes away, the $ 1.1 million borrowed from the United States will be raised, raised, and valued so much that it could become equal to Georgia’s budget which carries the heavy debt burden on America, and we pay at least a hundred times more per annum than we were given last week, while they will say after the crisis that they helped us. If redistributed it per capita, it comes out that  one citizen of Georgia is not worth no more than 25 cents  for the US. Otherwise, the Spanish government would not kneel before the US Command for the whole week – perhaps your troops were withdrawn, but no agreement could be reached yet, America does not want to risk the health of its soldiers, takes care of their health in peacetime, but recommends to us  go, come, fight, criticize Russia, we are back to you. Not to Georgia alone  the US has closed its borders to  the rest of the world and has no desire to enter them in  the country.

Yeah, now is the time for everyone to show their true face, and after the first shock, Emmanuel Macron called Angela Merkel in isolation and said, “Maybe we can help Italy and Spain, it’s a shame.” Until the most powerful states in Europe, hundreds of people die each day in Italy and Spain. Because of the dangers there and, boldly, the uncontrolled situation, the Georgian government is designating airlines to send immigrants back home. Here’s a quick reminder: Remember how many times either the authorities or the opposition have mentioned Georgians living in Russia, especially the largest Georgian diaspora in Russia, with about a million of our fellow citizens living there, all of whom say the Russians are hiding the real picture of the infected, is there really a disaster? So, if you think, gentlemen, that there is a catastrophe in Russia, why not once take us – to bring our compatriots and arrange flights there? Because when Georgians leave Russia, Georgia is not ready to accept them. An extra slice of millions of unemployed (if nobody is employed here, it’s easy to imagine) would be a catastrophe for the country. Even if otherwise, Georgians living in Russia send the largest amount of money to Georgia, and it can be safely said that this is the monthly “foreign investment” on which the Georgian economy and the GEL are hanging, so everyone shuns the topic, no one speaks aloud, but they know the real picture. Again, let’s take America and its $ 1.1 million in gratitude. At least five so many come to Georgia every month from Russia; At least five of these are taken by Georgian citizens and exist at the expense of those who work in Russia, live there, and nobody says them – go home !  Note, too, that virtually the only land route by which the necessary commodities can come in is through Russia, and we have repeatedly tried to block and intercept this road at the instigation of the West. We suspect that a general quarantine will soon be announced in Georgia, and along with the panic, economic hardship will surely come. Now is the time for us to stop playing with tails before the west  and turn our attention to what we should do in real.   Now the world is struggling for survival, and we must think first of all about our own country, our own people, and then about the rest. Otherwise, 25 cents indeed is our price.