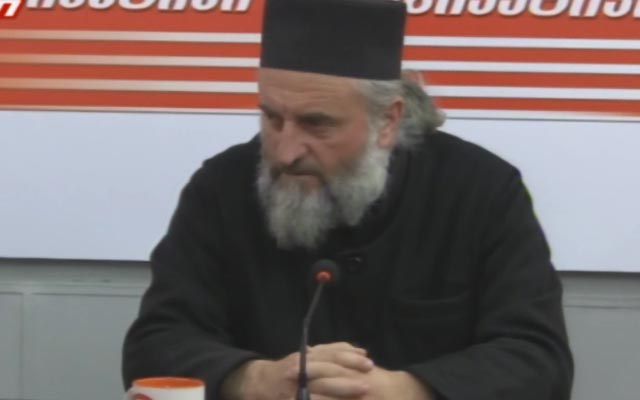 The general liberal hysteria caused by the failed gay pride parade on Rustaveli Avenue on July 5, which, despite everything, failed to get off the Internet and, as usual, remained in the form of outrage, was subsequently joined by 15 LGBT parties and the Western diplomatic corps who signed the Gay Memorandum.

Numerous statements and comments circulated in the media and on social media have tried to convince us that the failure of the Pride Parade was a serious blow to Georgian democracy, and that the “civilized world”, to which the country aspires, has received yet another clear signal to take action to protect Western values. Views were expressed that the government was inciting violence, thereby jeopardizing allegiance to the Western liberal course, and so on. The U.S. embassy response, as always, has been particularly strong and categorical. They called what was happening unacceptable to Georgian “tolerant hospitality” and a threat to the rule of law in the country…

Archpriest Guram (Gamtsemlidze), rector of the Church of the Three Saints in Digomi, speaks about what the July 5 action, which disrupted the gay parade, meant for Georgia as a bearer of traditional values of an Orthodox state, why most foreign ambassadors were concerned about this fact, and other important issues.

_ Father, on July 5 all of Georgia marched on Rustaveli Avenue in the capital city. The rally of many thousands, which we can safely say was a real public protest, disrupted the gay pride parade. How do you assess this fact and the statements made by Western ambassadors in the background and after the rally. They, as you know, condemned the disruption of the Pride Parade.

_ We are not saying anything new or doing anything that we haven’t done before. We Christians, Georgians, have always defended and will continue to defend morality, which is the foundation of Orthodoxy. If a person is morally sound, he does not need to explain anything, and an immoral person will never be a Christian. As for the political reaction to what happened, we believe that debauchery and generally anything that incites the degradation of society should be called by its own name. Therefore, I think that the assessments given by certain politicians, including foreign ambassadors and diplomats, are not important to us.  Call it freedom of speech or democracy, debauchery remains debauchery. In Christianity, sin is called sin, good is called good, evil is called evil, etc. This is the truth, so what happened on July 5 means only one thing: it means that a Georgian man, a true Orthodox man, wants to live morally. We don’t oppress anybody and we are against any oppression, but we don’t let anybody go out and preach immorality. It’s superfluous to talk about the celebration of sodomy.

_ You mentioned oppression and violence. For years, pseudo-liberal propaganda has led society to think that any action to protect national identity and reflect attacks on it is violence. It turns out that society should offer no resistance when an externally controlled fringe minority puts forward an agenda that is totally unacceptable to it. Is it really violence when society opposes attacks on the church, or proclamation of sodomy as a norm, or juvenile dictatorship, etc.?

_ They contradict themselves with the slogan “No to Violence”. Because, first of all, they are abusers  themselves, when they try to push an ideology that is unacceptable to the majority of the population, and tell them, whether you like it or not, whether you want it or not, we have to have a parade of debauchery. That is the violence of the majority. Laws are passed against the will of the majority, they oppose the church, most of the media is in their hands, embassies, foreign-funded so-called NGOs support them… Who is the victim of the violence, them or us, the Georgian people, who are not asked anything in our own country?!?!

As for the fact that we as a nationally minded people should stand idly by and remain silent when a marginal minority accuses us of everything, I know and believe that it is not violence when you want to protect your country, traditions, values, identity and national identity from physical threat. It is not violence when you serve the truth and commandments of God. On the contrary, they are the abusers.  They come and force us to live ‘like this’, and we don’t go to anyone or force anything…

_ They also consider it violence when, for example, a child grows up in a traditional family and is indoctrinated that he is a Christian …

_ They contradict themselves in this logic, and it shows the double standard of pseudo-liberalism – they leave no choice to children when they teach them that, for example, sodomy is the norm, or gender can be chosen. Poisoning a person with these abominations is violence, whereas Christianity does not force anyone to do anything. There are cases where a person grew up Orthodox, but did not choose this path and no longer lives by the rules of the church.  As I have said before and will say again, freedom is when you are your own boss, not when everyone has the right to show off their sick, unhealthy aspirations or tendencies. To me, that’s not freedom. To me, it is a perversion that is absolutely unacceptable.

_ There was one symbolic episode at the July 5 rally – the EU flag was taken down in front of parliament and the Georgian flag and the cross of St. Nino were raised in its place. What was the significance of this?

_ In short, I have nothing against Europe and real European culture, on the contrary, I respect it a lot, but what we are told by the ambassadors, recently even in a categorical tone, is unacceptable to me. I cannot consider as friend and well-wisher someone who forces me to accept something totally incompatible with my culture and threatens me: if you do not accept it, I will no longer support you… I do not believe in such an alliance. So we will not accept depravity  from anyone, not even the American ambassador or anyone else. As for the removal of the flag specifically, whether it was symbolic or not, and whether they will hang that flag in the same place again is not important to me. What matters to me is that people came out and publicly rejected the depravity, the propaganda of immorality that the whole so-called civilized world has been feeding us in the name of democracy and telling us that this is progress. This is not progress, this is regression and complete degradation…

_ Since you mentioned the ambassadors, they, and in particular the United States ambassador, were extremely concerned about what had happened. Some diplomats even called for the prime minister to resign. What would you say to them?

_ I would only tell the ambassadors one thing: don’t interfere in the internal affairs of a foreign country and don’t dictate anything to anyone! The ambassador’s duty is to settle relations between countries, including trade, economic, political and so on. And the question of how society should be organized and what should be acceptable or unacceptable in this society is none of their business. It’s up to us, and we’ll take care of it, so it’s not up to them to tell us what to do. Let them mind their own business. Let them not test the patience of the Georgian people. Well, if they are such loyal friends of ours and care about us and our welfare, let them take care of our destitute citizens who have gone abroad as laborers. Let them take care of those people who were taken to Germany for employment and then were not paid…

_ Lastly, I’ll ask you again about Pride: the gay pride parade failed, it didn’t happen, and it should not be, but they’re not going to stop. On the contrary, they are actively writing on social media that the so-called “March of Honor”, sooner or later, will still take place. Do you think the patriarchate will be in the future, and should it be at the forefront of public mobilization if it becomes clear that it will be necessary?

_ The Patriarchate cannot call for anyone, because the Patriarchate is the spiritual protector of the nation. That’s first, and second, I don’t think anyone needs a call  today; on the contrary, if we hadn’t raised our voice at all, people would still take to the streets on July 5.  When there is discontent in society, and this discontent is growing, it is impossible that this discontent will not lead to an explosion.  The propagandists of debauchery have not seen this and do not understand the situation.  As for the fact that the Pride Parade will be held sooner or later anyway, it is the duty of the clergy to protect morality. He who does not do so is not a clergyman… If there is an attempt to hold a parade, of course we will march again, there is no other alternative.

Joint statement of the participants of the round table held in Tbilisi on March 22, 2022 on the events in Ukraine

Let’s see what happens, and not what someone wants us to show