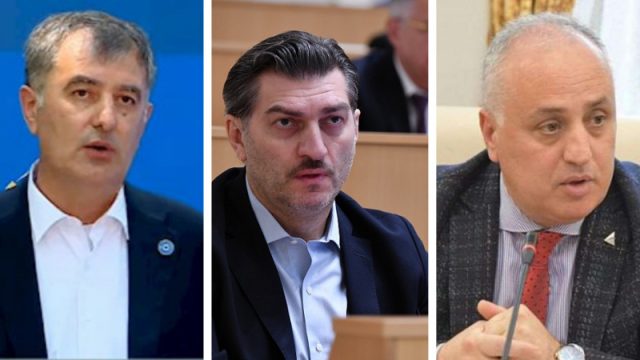 Over two weeks ago we addressed you with an open letter providing several questions subject to the special interest of Georgia society,  However, unfortunately, we did not receive an answer to any of our questions.

We would like to clarify once again that by asking certain questions, our goal was not to attack the United States, but to protect its positive image and reputation. We tried not to let the Georgian society lose confidence in its strategic partners and even doubt that the United States is aimed at returning the National Movement to power and opening a second front in Georgia in order to better deter Russian military aggression in Ukraine. We believed that the trigger  of such doubts would seriously damage the high confidence in Western institutions, which had been strengthened by the Georgian government for years. And this was the ultimate goal that we pursued – to prevent the undermining of public confidence in the United States, as well as to prevent reputational damage to Western institutions. That’s why we considered it our duty to ask certain questions and expect clear answers, not insults.

Once again, let us remind you of the context of our questions:

1. We were wondering whether you disassociated  from the Georgian radical forces, their foreign lobbyists and the rhetoric of the Ukrainian officials directed to the opening of the second front in Georgia if you disagreed with the rhetoric of Georgian radicals, their foreign lobbyists and the highest-ranking representatives of the Ukrainian government, which was aimed at opening a second front in Georgia (We do not list direct or indirect calls and statements of each of them – Gigauri, Lomjaria, Usupashvili, Margvelashvili, Chergoleishvili, Chiaberashvili, Mshvildadze, Sanaia, Podoliak, Arestovich, Goncharenko, Danilov, Arakhamia, Kasyanov, Ilves and others, which aimed to mature the idea of war in Georgia; we do not recall the grave provocations related to the imposition of sanctions and sending volunteers, nor the recall of the ambassador by Zelensky because of not imposing sanctions and not sending volunteers). Mme. Ambassador, you accused us of forging the facts, though all the statements we have mentioned have been made publicly and broadcasted by the media. By not answering our questions, you made us conclude that you never dissociate from the war rhetoric but even encourage it with your principal decision. And your demonstrational meeting with Nino Lomjaria after our open letter constitutes true evidence of this fact. Even Lomjaria confirmed this logical conclusion of ours when stating that the meeting with you aimed at the open expression of your support to her. By meeting with Lomjaria, you openly told the Georgian society that you prefer the bombarding in Georgia to the refusal of Georgia to impose the sanctions. We predict you will meet your other favorite, Eka Gigauri tomorrow, who has also clearly expressed your position stating that “Russia loses the war in Ukraine and lacks the resources, so it will be unable to spread the military actions in various directions and thus, we shall do our best to use this window of opportunity”. Let us also remind you that a couple of days ago you have made an important statement – “It is important as never for Georgia and Ukraine to unify against the Russian aggression”. Against the background of the open support of the war rhetoric, this phrase puts a final enhancement on our belief that you supporting the campaign by the radical forces express not your political partiality but the pre-plotted plan;

2. Another question was about the Bakuriani meeting – we wanted to know whether you dissociated from this meeting, where the radical opposition and its NGOs and media were trained by the American Peter Ackerman on the organization of the revolution. We also wanted to know whether you dissociated from the demand later issued by the Bakuriani meeting participants on the resignation of the legitimately elected Government and the formation of the so-called technical authorities. The answer to this question was of particular interest of our society providing that most of these people raising this demand are financed by the American taxpayers. However, you have never answered this question, which we perceive as a fact that unfortunately, you are solidary to the Bakuriani meeting and support the resignation of the Government and formation of the so-called technical authorities;

3. As you know, first by the TV stations belonging to the National ­Movement, and later by the judges, information was spread that: a) Judge Chkhikvadze was summoned by an officer  of your Embassy; b) The officer of the Embassy requested a report on the Gvaramia case from judge Chkhikvadze on your behalf; c) At the end of the meeting, the officer  of the Embassy informed the judge Chkhikvadze about his removal from the planned visit in a few days. We wondered if you would confirm this fact, which is, unequivocally, a gross violation of the Constitution of Georgia and the Vienna Convention and a gross violation of the independence of the court. It was desirable to hear from you a negative assessment of such a possible fact, which would strengthen the public’s belief that none of the employees of the American Embassy will attempt to interfere with the independence of the court and introduce clan elements into the system in the future. However, you neither denied nor evaluated this fact, which finally strengthened our belief that the information spread first by the National ­Movement and then by the judges is true, and you want to present such a gross interference in the independence of the court as a norm;

4. And finally, we never received your answer to the question of whether you met with Bidzina Ivanishvili after the start of the war in Ukraine; your negative answer would clarify many questions and dissipate the doubts, including the doubts about the possible links between the actions of the Swiss Bank and the interest to engage Georgia in the war; However, your ignored all our questions and thus, enhanced our doubts.

To sum up our letter, we may conclude from your statements and silence that:

You refuse to dissociate from the war rhetoric but even support and trigger it;

You are solidary to the Bakuriani revolutionary meeting and share their demand for the resignation of the Government and the formation of the so-called technical authority;

You admit the interference in our judicial independence and even approve it;

You met with Ivanishvili after February 24 and we can easily guess your message delivered to him.

Since  you have an ambition to actively get engaged in Georgian politics and jurisdiction, naturally, you shall also realize your due accountability to the Georgian society, though, you preferred to engage the press speaker of your Department of State than answering our legitimate questions. And when you avoid the legitimate questions by MPs elected by the Georgian people, you thus prohibit us from hearing the truth and strive to make us silent, which is a clear exposition of your attitude to our sovereign state. True partners who respect friendly people, the state, its sovereignty and institutions do not behave like this. In addition, the very fact that your protection was decided at the level of the spokesperson of the State Department gives us one additional piece of information – everything you do are  not your personal decisions, but the current American strategy towards Georgia.

The same applies to the issue of the second front. Of course, the involvement of Georgia in the military conflict would be a serious help for Ukraine against Russia. We see that you supply Ukraine with weapons every day, and therefore neutralizing Russia’s military advantage in Ukraine is a principled task for you. In addition, we understand that the second front would further undermine the image of Russia, which would keep European countries motivated to help the Ukrainian front. However, when such a goal drives you, you have to be brave and tell the Georgian people about it openly. Most importantly, you should give people a chance to choose and you should not try to convince or force their government behind their backs. We will also say that we have quite detailed information about what conversations were held in specific offices, however, we refrain again from disclosing the details of these conversations.

We also ask Bidzina Ivanishvili, since American Ambassador did not answer the question about the meeting, to tell the public whether the meeting between her and Kelly Degnan took place after February 24, and if so, at whose initiative and what issues were discussed.

We keep hope that Georgia­n Dream will defend its positions until the end and will not get involved in such a war, which may have some advantages for global goals, but promises complete destruction of our country. However, to prevent even the minimal risk of this scenario, we need to be maximally active and reveal the truth to the public However, in order not to allow even the slightest risk of events developing in a different scenario, we think that our maximum activity and telling the truth to the public is necessary, which we will take care of as much as possible in the future.

Dimitri Khundadze, Member of Parliament: The US Ambassador shall make clear, unambiguous statements and explanations as to what we are dealing with.

How the US Views Judicial Independence:After delivering the verdict in Gvaramia case, I met with the US Embassy representative, who told me that the...

THE OPEN LETTER OF MIKHEIL KAVELASHVILI TO MME. KELLY DEGNAN