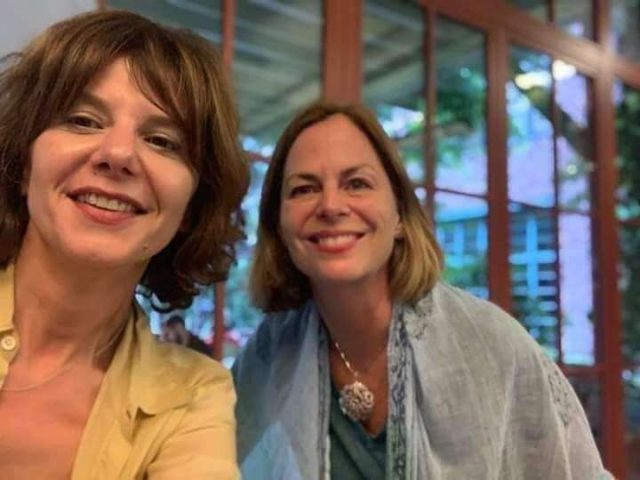 The  Georgian political field was once again shaken  by a known storm called “NDI”. As you are aware of,  in the United States of America, Canada, Japan, Australia  it is an usual practice  to give names to storms, hurricanes, tsunamis.  and other natural disasters. We heard about the hurricane “Alisa”, storm “Bill”, tsunami “Margarita”, etc. which has damaged in different times and doses the ocean shore s of the above listed countries. As for us, it is not necessary at all to invent a new name, because, the only “tsunami”  that is attacking  to us once in each two months, in called “NDI”  and, despite the circumstance that we all know in advance the results it will publish,  nevertheless it shakes strongly and for a long time the Georgian society. It is true there exists also another natural  disaster IRI (people affectionately calls it ai-ra-i), but it is just a moderate tornado in comparison with a tsunami named NDI

A  hurricane storm and  tsunami raised by NDI together, get quite  another dimensions, but a purpose  of this article is not so much  a criticism  of NDI and its “surveys”  we simply want  to draw your attention  to as if “outrage” of the current government of Georgia regarding this absolutely idiotic surveys ordered by NDI and in fact to their not so disappointed faces and real actions.

If we think well about it, the shameful  outbursts of NDI are first of all acceptable for “Georgian Dream”  and. let’s say frankly, why:  instead of the actual problems, instead of discussing about the poor living conditions the population is now, instead of  charging responsibility to this really weak state power for this very hard situation  the country is facing with, an accent is shifted to the talks whether Kakha Kaladze’s positive image is higher than the one of Bidzina Ivanishvili, or  David Bakradze is more trusted person or Giorgi Gakharia, for the Georgian population, or  Irakli Garibasgcili is more colorful personality or Zviad Kuprava, or Nino Burjanadze is more a woman  or Elene Khoshtaria – more a man, and many  other similar sully themes come to the foreground

A certain “Spoiler” of the last survey of the NDI really is Kakha Kaladze and let’s assess appropriately this their decision . Kakha Kaladze’s them is  put obviously intentionally in this survey and, as the experts think, “Kala’s” extremely increased rating should create a certain basis for alarm to personally Bidzina Ivanishvili and some other leaders of  the ”Georgian Dream” too, who  hold now or want to occupy higher positions in the  future

As  experts say, “Kala’s” personality creates a threat. Some of them even insist that in  general, the total “Georgian Dream” started  “trembling” when such increased rating of the Mayor of the capital city  was announced. . .

We cannot say whether it is true or not, but a fact is thar at present, NDI became very suspiciously in love with David Bakradze and Kakha Kaladze. All this survey is intended simply not to disappoint too much Bidzina Ivanishvili and Mikheil Saakashvili, but  to say just  Bakradze and Kaladze are the main heroes of the last NDI survey

Or, maybe some others have gained Laura Thornton’s (a close friend of Bokeria-Chorgolaishvili’s family pair and the head of NDI Tbilisi Office) have gained heart and pocket for a black cat run between Bidzina Ivanishvili and  one of its most solid footholds – Kakha Laladze?

It is well known that  from the very antient times rulers  always experienced pain about a raise of  rating and popularity of any of their viziers. In this context, Bidzina Ivanishvili does not differ so much from a type of “eastern rulers”  and, if anybody thinks he my create a feeling top Bizina that Kala’s authority is increasing extremely, this inevitably will cause  an appropriate reaction by side of the “ruler”. Known facts of the history say  how “brilliant viziers” were punished  by Shahs by a sole reason – vizier gained and increased influence and authority that caused anger and envy of shah

And finally, is it true that the results of the NDI survey caused Bidzina’s shake? This will become clear soon. A minimal result  the ruling party received from this survey is that just this survey ordered by NDI and its surprising results have become the main topic of all TVs and other  massmedia sources during the last week.

Another surprising fact is that according to this survey, the rating of the Patriarchate and the Patriarch personally, is decrease sharply  and, the survey shows as if  even Elene Khioshtaria’s rating and popularity are  higher than the Patriarch’s.

We can say figuratively: Influence of an expensive cognac presented to Laura Thornton by Chorgoleishvili  in Bokeria’s family is noticeable

Everything in the NDI surveys is arranged with such “calculation” that is the most favorable to Giga Bokeria and his team:

In all here, we can see the so called “dual goals” too – for a long time some talks are on that the “European Georgia” pretends for substitution of the “National Movement” and, after the 2020 Elections to become the “second political force” i.e. the main oppositional force, in Georgia. Another not groundless talks relate to the circumstance that Bokeria as if “received Bidzina’s consent”  and everything is developing according to their secret covenant. By the way, if   consider  the last surveys of the NDI  from this section, we can say that everything is clear  and exactly on their places, including Kaladze’s theme among them – if Kaladze decides to leave the “Georgian Dream”, and form his own political party, he really has big chances to compete with Giga Bokeria and his “European Georgia” . As off today, Kakha Kaladze really has a potential to form the “Main oppositional force” which, in line with all other things, will be stable financially and, may gain quite a large number of seats in the parliament of 2020 formation

In contrary does not act carefully and as always directly and loudly says its words “the “Alliance of Patriots of Georgia” , namely, Irma Inashvili.

We did not mention up now and,   let’s say: in “Laura’s surveys” a modest mention or most frequently – non-mention at all of Irma, is conditioned by Bokeria-Ivanishvili schedule and, can be explained very easily: Bokeria wants to threaten Ivanishvili by Kaladze and in parallel, to force him to realize how high rating has Bakradze. But, he does not know what to do with Inashvili who is a really high-rate politician. That’s why Bokeria removes her from “Laura’s surveys”, S IF NEITHER THE “Alliance of Patriots” nor Irma Inashvili exist at all  . . .

Otherwise, it is unimaginable to explain the fact why somebody Elene Khoshtaria is interesting for NDI who is mentioned there in four or five different sections and, why a rating of the acting vice-chairperson of the parliament is not interesting, if to take at least the sections of popularity, confidence, or some others, of the survey

And finally, if we try to arranged everything  orderly, it becomes clear that a noise  around the NDI surveys, is in real a performance only, staged for covering other events. Moreover,  it is Also very doubtful the active talks in the massmedia  about dismiss of Giorgi Gakharia from the position of the country’s prime minister.  To say openly the state power has unexhaustive themes as if against itself, by which those facts and events are covered effectively, which really indicate on weakening the government and running the country to catastrophe

Ivanishvili and company make all possible efforts for not to give to  the society to see and understand such a catastrophe. What another unfortune to see when in line Bidzina Ivanishvili, Giga Bokeria  too – author of the 9-year bloody regime, works well for  covering catastrophe ?!