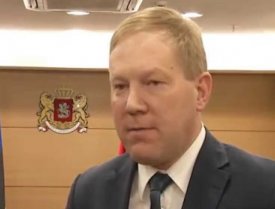 “If the already taken decisions are then changed  just for  simplifying achievement of interests of this or that party, it may not be a good  practice  that one can apply” – Marko Mikelson – deputy chairman of the foreign affairs committee of the Estonian Parliament declared in his interview with “Interpressnews” regarding the last months developments around the electoral system in Georgia

“Estonia and Georgia are the closest friends and, or us it is critically important that you be able to achieve success in your selected way. . .  A successful integration with the EU and / or NATO depends considerably on how well  your  local affairs go. how strong the democratic institutions are,   whether  the democratic and pluralistic debates are arranged with participation of all stakeholders” –  Mikelson indicated and added also that he is aware of the existing realities   – “I heard in several European counties what the politicians think: “Well, we know you have conflict with Russia, but, we cannot take it into NATO” . . .  ”This, , as we see, is fatigue, and not only in  case of NATO, but also in the case of EU enlargement. . . Russia is a strong country, a nuclear power, many countries have with it many-century  relationships. A hope exists always that it will be better if Russia is included in the worldwide security-related debates and not stay in a permanent confrontation. I think that t we, Estonia and you, Georgia, are together in idea that establishment of normal relations with a big neighbor is better  anyway”