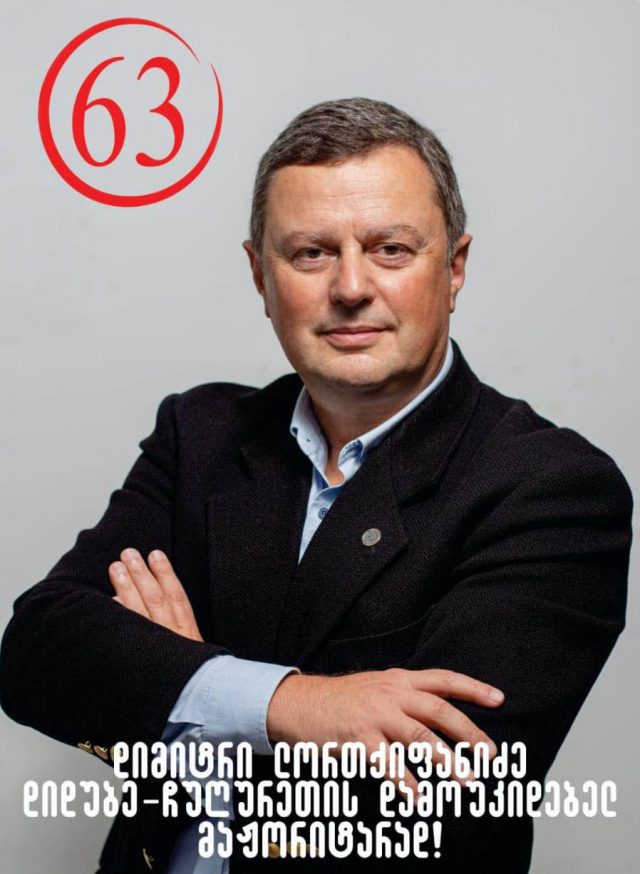 Georgian Defense Minister and former Prime Minister Irakli Gharibashvili spoke live on Imedi TV about the nine-year period of the previous government and said that Saakashvili, as the main creator of the regime, was the fruit of a Russian special operation together with his political entourage. He said the UNM had proven through a number of actions over the years that it was pursuing Kremlin policies, while Saakashvili himself came to power on Primakov’s guarantee: “Saakashvili came on Primakov’s guarantee, his uncle is known as a KGB colonel and an illegal arms dealer. This people are fighting against our country and our people, my friends. The choice is up to us. We either choose patriotism or we choose betrayal.

According to Garibashvili “Saakashvili did everything for transferring to Russian companies almost all strategic objects of Georgia, which were securing the  energy safety of  our country. The minister counted specific objects which occurred in hands of Russian after  the was and added that all this served for a an attempt of complete economic and political   annexation of Georgia by the Kremlin We’d like to remind  that  Kremlin agency and Russian policy-making   is one of the heaviest accusations that the “Dream” and the “Nationals”  declare frequently against each other. By such accusation both parties try to discriminate each other, however, all the social studies  conducted in the last period, show it clearly that a number of population supporting direct dialog and normalization of relations with Russia, is increasing . . .

What is the use of propaganda today that Saakashvili’s nine-year regime was a Russian project and how correct it is for the Minister of Defense to say that Saakashvili came with Primakov’s guarantee – Majoritarian MP candidate in Didube-Chugureti constituency, human rights activist Dimitri Lortkipanidze talks about these and other important issues.

-, Mr. Domitri, in one of the TV show,  Georgian Defense Minister Irakli Garibashvili said that Saakashvili  was the fruit of a Russian special operation and came to power on Primakov’s guarantee. In recent times, similar allegations between the opposition and the leading party are often heard. Do you think these estimates are real? Do you think that such rhetoric, which clearly contains elements of anti-Russian sentiment, will further complicate the already tense Russian-Georgian relations?

– It is not new to speculate on this topic in the Georgian political reality, I mean blaming the Russian agency for each other. It has already become a kind of practice. Moreover, some parties, such as the National Movement and, in part, the Dream, often base their campaigns on this, creating a threat to each other and thinking that this increases their political chances, but there are facts that reveal who is who – who Agent, who came with whose guarantee, etc. Now let’s talk more specifically about the figure of Evgeni Primakov, who for some reason is attributed to Saakashvili’s guarantee. To begin with, Primakov is considered a world-class meter  of diplomacy, a recognized fact, and his name is associated with the re-emergence of Russia as a superpower in the international geopolitical arena. I would like to recall his role in Georgian real politics with two important facts, which for some reason are less focused today: first – it was in 1997, when Vladislav Ardzinba arrived in Tbilisi on Primakov’s initiative and, in fact, agreed to negotiate with Eduard Shevardnadze. By the way, at that time, in practice, the issue of Abkhazia’s integration with Georgia was decided and there was a specific political formula for our life in a common state, but then it all failed. The reason we all know – it was the direct intervention and resistance of the American side, which played a crucial role. As for the second fact, which also shows that Primakov’s role as a diplomat in the Georgian political reality was only positive, it is the bringing of Sergei Shamba to Tbilisi in 2004, which was also a chance for the Georgian side, but in this case the Americans intervened and disrupted the talks – Saakashvili , With a stern indication from Washington, stepped back … That’s all, the process failed. This is when a sharply anti-Russian campaign begins and, as time goes on, the so-called reformers of the Nationals – Bokeria, Adeishvilis, Ramishvilis and others – are distinguished by anti-Russian rhetoric.

-, That is the conversations as if Saakashvili came to power by “guarantees” of Primakov, are groundless?”

– The only  thing I  can say for sure  is that if we talk about that in 2004 Mikheil Saakashvili had a certain support by side of Primakov, this support was preconditioned just by fact that Saakashvili was instructed to start negotiations with Abkhazians. This was a positive process for the interests of our statehood buy Saakashvili did not or failed to do it due to understandable  reasons  –  he simply represented the interests of other political orbit. As to Primakov as a “guarantor”, regardless of my highest respect to Irakli Garibashvili  ,I cannot  find a logic in the opinion that as if “nationals” leader came to power by Primakov’s support. How can it be possible, that a force funded by Soros Foundation and pursuing the anti-Russian political course of the west, could have any relationship with one of the most influential figure of the Kremlin?!

– As we have already mentioned above it became an ordinary practice  in the Georgian politics that this or that political forces  stick  to each other a label of Russian agent. In conditions when  the number of the country’s population  desiring normalization of the relations with Russia is increasing gradually,  is it adequate to fight with political opponents  with such methods? Does  not it indicate on a complete inconsistence of the state power to the public interests?

– The point is that the actions of the current government and its allied political forces indicate their belonging to Western patrons. This slavish and puppet attitude is already very obvious.

As for the threats that these harmful approaches may pose to us, I think in the context of the fact that the region under Turkish military-political expansion is virtually vulnerable and, what awaits Georgia tomorrow, one does not know, completely ignoring Russia’s role in these processes for us Is tantamount to suicide. This is understood by all sensible people, because in the current situation Russia is the only balance-partner in the region, if the advantage of the forces is clearly shifted to the Turkish side. By the way, some influential international experts think that Britain is interested in strengthening Turkey’s influence in the Caucasus region and weakening Russia’s position. This means that the West is interested in turning the Caucasus into a testing ground for superpowers, the beginning of which will be the involvement of Russia in a large-scale war as a result of provocative actions by Turkey. This is what is trying to assess what is happening today between the two sovereign states of the South Caucasus – Armenia and Azerbaijan. However, there is no less interest in Georgia, which is clearly seen in the provocative actions of the West, when positive signs of a settlement of Russian-Georgian relations appear.

– Do you see a solution?

– The solution, in theory, is very simple – must end harmful political practices, which is a complete anomaly, that at the political level Russia is still a threat, and at the economic level – the main driving force of our economy. Here, the result of these abnormal approaches is that today we are disoriented around the world and, in fact, we can not achieve any success in economic, political or other areas. I am not saying anything about the fact that we do not have a single real ally as a result of this harmful policy, unlike our neighboring countries, which are in a much better position in this regard.

– In ten days the society will elect a new parliament. What would you say to a society that expects some change from this election?

– First of all, I would like to once again express my deepest respect for Georgia and the world as one of the outstanding newspapers. You are a media outlet that, unlike other media, upholds the recognized principles of democracy and gives all candidates an equal opportunity to present their position. This is very important, especially important to me, because, as you know, I am blocked by the „liberal“ media. By the way, because of this I have already applied to the Communications Regulatory Authority, I have also applied to the management of the televisions, but to no avail. For some reason my place in any TV debate during this time was not found. As for the expectations, I have said before and I will repeat now that my competitor as a majoritarian MP candidate in Didube-Chugureti district is not any entity, but the system as a whole. We are talking about the so-called On the neoliberal system, which is a façade of the defender of democratic principles, when in essence it is absolutely the opposite of democracy. Here is our data today. Nevertheless, I am sure that the voters of Didube-Chugureti will make the right choice on October 31; A choice that may then lead to even larger-scale change, and in the even more distant future to the precondition for radical ideological-political change.