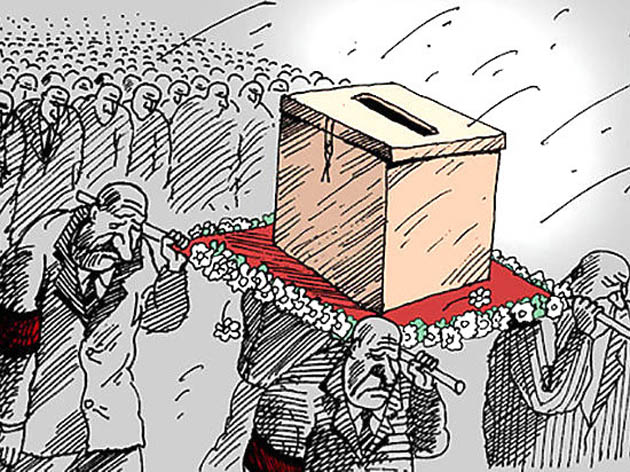 With the elections approaching, the temperature of political fermentation reaches a maximum. Both the government and the opposition are slowly moving to “restricted zone” and, most importantly, the so-called The united opposition already seems to have nothing to do with each other and is only working on themselves. Imaginary unity, a common candidate, a common list, and a lot of nonsense said recently are a thing of the past, and everyone has shown their face.

The main “trump card“  of the opposition against the government is “Russian influence“ on the country. Yes, the opposition unanimously claims that Georgia is ruled by a Russian oligarch and that is what needs to change. The interesting thing about this story is that no oppositionist can and does prove the “Russianness“ of the government and what it means for a “Russian man“  runs the country. All the representatives of the government from all the high tribunes clearly confirm that we have a course towards the West and, most importantly, it is this government that has twice refused direct dialogue with Russia in the last two weeks.

Today’s reality is this: European countries and the United States say they will send observation missions in Georgia, they will observe everything under a magnifying glass, they will pay attention to the election results, while Russia is silent. The northern neighbor neither sends observation missions nor makes announcements about the elections. It should also be noted that a few days after our election, there is a presidential election in the United States, but a strategic partner still finds time for us – our Parliament is more concerned than the President of the United States and therefore sends observers to us. Apparently, the US ambassador did not like Russia’s silence and said an interesting thing last week:

“Of course, everyone is closely monitoring the ongoing processes, because there are great expectations. As for the topic of disinformation, we have seen such harmful actions from Russia in the elections of different countries, in Europe and also in the USA. Therefore, there is probably an opportunity for the same to continue in Georgia. I think that the Georgian government is taking this issue seriously and so is the society. It is very important to respond correctly to incorrect information and to be careful about the issue that is to the detriment of the country” – Kelly Degnan said, but did not specify what was meant by misinformation and harmful actions.

Everything goes beyond the fact that both the opposition and the West are preparing for something. In public or behind-the-scenes conversations, they have repeatedly stated that the government should change after eight years in power, but still with the persons they point to, and then what if people do not like any of them. That is why, with the transition to the proportional system, the so-called „The Lock”  was also written by the American ambassador in the law (this woman has been asked again, whether you want it or not, Russia is interfering in the Georgian elections. Yes, but whose ambassador is Kelly Degnan, America or Russia? And now a party that cannot get more than 40% of the proportional vote will not be allowed to form a government alone. This means that the so-called Coalition government should be formed and thus democracy will win and one and the same force   will not remain in power for more than 8 years – there will be temporary rule. Why temporary? Because wherever a coalition government was formed, it could not last more than a quarter. Opposition ministers sabotaged, then people took to the streets, then snap elections were called and many countries (including Italy) spun several times in the same circle. The weakness of the Italian government appeared at the beginning of the pandemic, when one of the leading countries in Europe was left alone with the virus and everyone left it, only apologizing – we could not take care of you, we were facing our own troubles  . Yes, when the big countries had a hard time, not Georgia, but Italy was forgotten. Consequently, the unity of Europe, its support   or erased borders is a total lie. All locked in their own shells, and until the first wave of danger passed, no one pulled their noses out.

Georgia was not in that time before such  difficulties as it is now. Take the daily number of infected people and  the death statistics, but, it in that time they allocated million, now even do not think about it. It  was as if we were used to having 50 infected people a day worrying us and now we are no longer worried about 300. We mourned the first dead  and then we got used to it. The deaths of individuals is a tragedy, and the deaths of many are statistics, and we follow those statistics.

Let’s go back to Russia and our elections. Of course, for the northern neighbor, it does not really matter who will be in power, whether the elections will be transparent or not, etc., but to say that Russia wants its man in power is an exaggeration. Look at the political spectrum – who is in power and who is in opposition? All parties (except Nino Burjanadze and Irma Inashvili) unanimously say that they are not going to have a dialogue with Russia and are competing with each other in cursing the leader of this country. As a result, Degnan’s statement also seems out of context, but at first glance. With this statement, the ground was prepared for the fact that if the West does not like the election results, they will definitely try to copy the interest and then say that Ager, Russia intervened in the case and that such a result was achieved. Those who have questions will cover this statement on their face. Even when Ms. Kelly said that Russia was trying to intervene and did so

The expectation that the choice of the Georgian nation may  be torn over our heads and nobody will ask to us anything, exists actually , both in the ruling power and opposition. Moreover, the opposition hopes for the support of Degnan, Hartzel and Mistanan, not the electorate.  The opposition is preparing for a coalition government and is demanding it directly at meetings. So what if people might make a choice that would destroy the possibility of forming a coalition government. Isn’t that Russia? Blame everything, rewrite interest and point. Do not say now, you can not do it, not the result of the elections, the supreme law of Georgia was changed a few days ago and believe us, if they want, they will tore the results of the elections    into sheets.

Where is the solution? The solution is for everyone to go to the polls, vote for the party they believe in (I am not really going to make calls), or, if no one wants to, cross everyone out, and then defend their vote and the result as it should be. That choice will be mine and yours, and that is the choice we must make. We must not allow anyone to take away our choice and our right to vote. Of course, we do not rule out the possibility of forming a coalition government with these results, but it should be our decision, the people, and not one or more ambassadors. It is easy to blame others and let us, the people, blame this election and let the people decide what we want and how we want it. Otherwise we will be constantly staring at someone else’s hand and lost our voice. Even a lost person can not hear his voice.