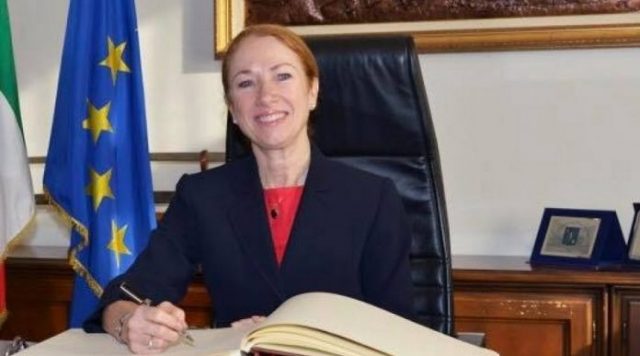 During our student days, we had a small quarrel with our peers and instead of making peace, one of them suggested that we go to  “Gray-haired Vakho”  in Nakhalovka district. Gray-haired  Vakho was a  thief in law  and if you refused to go  to the thief then, it meant that you were a liar. So we, about  15 boys went d visited Gray-haired Vakho in Nakhalovka district. He did not swear, but pulled us out of there – you, little boys, thieves’ discussions is not your job,  go and read books. It was fashionable at that time to come to a thief and he too would review a case, deal with the parties, decide the fate of the liar-righteous.

I remembered that very “thief in law” when the leaders of the ruling party and opposition visited the US Ambassador Kelly Degnan in her house. The televisions announced it this way: The meeting was being held at the US Ambassador’s house, and suddenly I imagined Kelly Degnan, sitting in a chair, dressed in a bathrobe, listening to the conversation between Archil Talakvadze and Grigol Vashadze, with a cat in her skirt and glazed eyes. Simply put, it turns out that in the political sense, Degnan is a “thief in law” and boys visited and asked her  to decide a case. Someone might laugh at this comparison, but it’s not really funny.  On an  ambassador, no matter  which country he/she represents,  should not depend   who won the election and none of ambassadors should be busy with solving cases, but it is all the fault of Georgian politicians. If you remember, shortly before the election, with the intervention of the US ambassador, the constitution was rewritten, and this is when the authorities insisted that we can not change the constitution, we have no legal right to do so, but it turned out that if the US ambassador wants, everything is possible in Georgia and our constitution It is a book of ordinary gifts, which a bride often copies thousand times before marriage.

A very bad trend has been established –  rallies should definitely be held after the elections. Only once, by the way, did the opposition say: “Dream” should not remain in power because it could not get more than 50% of  votes. At first glance, it is logical, but on the other hand, who should come to power instead of the 48% “Dream”?  the 27% “National Movement”? They bring everything to this way, but an interesting thing is that the opposition wants to rewrite the election results. The American ambassador knows this, the western partners know it too, but, nevertheless, they call on the opposition and the government to talk, forcing the ruling team to make concessions. Why? Up to one million people voted for the “Georgian Dream”, and then these millions will go  to the streets to defend their votes, and who will stand in front? 1% and 2% parties, or those which failed even reach 1% and  showed their real face? Do you know what is the most interesting? If they wanted fully proportional elections in 2020, it will be in 2024 and the electoral threshold is 5%. Do you know what that means? If fully proportional elections were held on October 31 with a 5% threshold, only two parties would enter parliament, and be sure,   this will be exactly the case in 2024, as voters no longer want to see the same faces, endless promises, fruitless rhetoric and Mikheil  Saakashvili as the main opposition man, again.

After all, everyone is especially preparing for Pompeo’s visit. It turns out that Pompeo has to deliver the message of the American president. Which president, gentlemen? It is still unclear what the outcome of the election was, the world congratulates Biden, Trump is suing in court and a man is coming to Georgia in this chaos, whose message should he deliver? Does anyone believe that Trump found some time, gave Pompeo instructions and sent  him in Georgia? No, gentlemen, no, the situation in Georgia is a topic to be discussed at the level of ambassadors and congressmen, at low rank, low level. Degnan and Pompeo quarrel a little, agree on something, and do not care at all whether it will be legal or not, they force Georgian politicians to comply.

It is a paradox, but it is a fact: being in opposition is a kind of immunity. Everyone remembers how Nika Melia removed the bracelet and how he threw it at the people, thus violating the law, according to which such behavior is punishable by 3 years in prison. If I, you, or someone else did it, would we go to jail? Of course, and Melia was taken to court with trepidation, they admitted their weakness – and we still had to untie the bracelet, the bail is a more reliable guarantee of punishment, as they said. You can  control how and where a person moves with a bracelet, and if you apply bail, how do you control it? If Melia with a bracelet wanted to cross the border illegally (suppose), he would not be able to do so, and he will be able to do so after paying. Which was more compelling? It is for fear of America and the west that the government can do nothing to frustrate opposition leaders and activists and deceive its own supporters – so much the better. It’s almost like the whole country was waiting for the MAP and then they showed us better than the MAP from afar.

Let us now turn to the main narrative of the opposition. They are shouting at the last vote, Russia is interfering in the elections. Then they could not find the facts confirming it and said: they  are silently interfering in the elections. Then they could not substantiate it and now they just call Bidzina Ivanishvili a Russian oligarch. And, if America intervenes, isn’t that a problem? The USA has “compromising evidence” in relation to Georgia and therefore does what it wants? The election, the results of which were practically recognized by the West, should be reconsidered because the opposition could not bring more than two thousand people to the streets after the riots and calls? Why do two thousand men decide what to  reconsider, what not, and why should up to a million people be quiet at this time? Yes, be calm, the leaders of the “Dream” said, and we doubt it, because   the supporters who are angry because of their weakness, taking to the streets, will not spare either the position or the opposition. Everyone is fed up with this story. We, ordinary people, are locked in our house after 10 o’clock, the opposition activists are walking on Rustaveli and the government can not do anything for fear that the opposition will make noise. What comes out? They are strong  and we are not? Or, maybe a support to  the opposition gives any privilege in Georgia and we do not know about it?!

You can not tell what story Pompeo will bring and what decision the government will make, or what the opposition will agree or disagree with, but the fact is: these ”cool guys” ho are now  coming e out in the role of political leaders, at one call of the US ambassador, if requested,   will also undergo a foot washing ritual for her. It’s not even a shame, it’s disgusting. You are not only selling yourself, but also your voter vote, you are only interested in the price. Americans do not care who the people voted for and how many, they have their own account, and the government-opposition must  show exactly the numbers the ambassador wants.

Well, as long as you sit at the negotiating table in the houses of ambassadors, until you gain independence, you are not liberated inwardly, before that it will be like this: sometimes you wait for Pompeo, sometimes you wait for Pompey . .  . Yes, illiterate and uneducated majoritarian candidates here and there, are a separate topic,  but, we live exactly as we deserve!

P.S. Years later, “Gray-haired Vakho” appeared on TV and said: I am no longer a thief. Do not be afraid, gentlemen, that one day the American ambassador will come out and say: Leave me alone, I do not want to see you here?  Then, in front of which embassy do you line up people with bowed heads? Bowed heads, because, who gave the slave the right to stand upright ?!