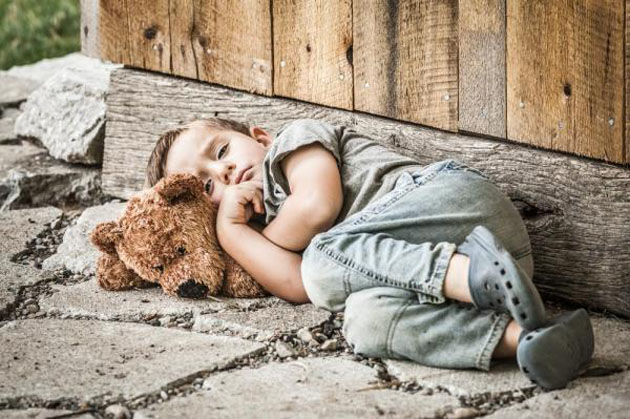 There is sometimes backstage and sometimes loud talk that the world is in danger of starvation and soon there will be a time when millions of people will starve to death … What to say about the millions, but in Georgia it is a severe problem and there are many cases of deaths of children from starvation. According to the United Nations Children’s Fund (UNICEF), about 300 children die each year in Georgia due to severe food shortages or a variety of related causes (pregnancy anemia, light weight in neeborns, congenital abnormalities associated with folic acid deficiency, malnutrition, etc.).

According to the UNICEF data, about 77,000 children live in extreme poverty and there is a risk that they will starve to death. 4 300 newborns have died in Georgia in the last 10 years …

According to UNICEF, one of the solutions is to increase funding for social programs. According to the calculations made by the Fund, the introduction of a monthly child allowance of 30 GEL will be most effective in reducing child poverty, and if extreme poverty today is 9.1%, it will fall to 3.9%. All this will cost the state 25 million GEL.

Before we expand on this topic, we will inform you about the official Geostat data that Georgia’s economic growth in 2019 was 5.2%.

“Our forecast is justified. Exports and remittances continued to grow. Despite the summer problems, tourism revenues have been increasing since October 2019, there has been a sharp increase in lending lately, and we also have good performance in fiscal terms, ”said Irakli Kovzanadze, Chairman of the Parliament’s Finance and Budget Committee.

Note: At the beginning of the year, the government predicted that economic growth would be 4.6%, and now the numbers have exceeded expectations – we actually have a better rate than the government had expected.

Of course, this is a good thing, and it’s time to jump on the hats with joy, but think for a second: What really happened in 2019, and why are we so happy?

Let’s start with the fact that last year the national currency broke all records and depreciated so greately that denied to appear shamefully out of pocket. I mean the pockets of high-ranking officials, because ordinary people do not have any money to keep in pockets, they even long for money to buy enough food daily.

Therefore, if you interview a hundred people in the street randomly, at least 98 will tell you that they did not feel economic growth on their own pocket, and it was precisely because of currency depreciation in 2019 that they had less income than in the previous year. If you look at the tourism sector (as millions of GEL from tourism go both to the budget and the pockets of ordinary people), 2019 was a true failure because of the swearing in the live television show, the main tourist segment, Russian tourism, was killed with a control shot, and anyone who has been seaside this summer will agree that the owners of family hotels were desparate because of the absence of tourists, the increase has not been in this direction. The products have become more expensive, bread price increased and nowhere has anyone said that people in the public or private sector have been given a salary rise. On the contrary – we only heard that companies were forced to shrink jobs because of the economic crisis. Most of this was reflected in the medical field, where staff reductions are still active today. There was no increase in this direction either. There is now government sector left. Given that funding for parliament has increased, so has the number of visits abroad; Tens of millions of dollars were spent on advertising tourism and on charter flights to transport tourists to Georgia from other countries (except Russia) for free. The increase was evident, that is, the government had the increase; Both the Parliament as well as the opposition and the position.

That is why in the declarations of ministers, department heads or parliamentarians new property is indicated – houses, cars, plots of land, paintings. Yeah, the strong ones in this country are paying thousands of dollars in paintings just like anything else. This is the amount that is enough for 3-4 families to support themselves from year to year; Families who starve their children because they have difficulty in earning money for bread.

Now about 30 GEL to be added for children, which will cost the state 25 million annually. Finding this amount can be easy. The simplest is to reduce the amount of money paid to Western companies for lobbying. Don’t think I am exaggerating. For example, Saakashvili’s government spent GEL 275 million per year on lobbyists and PR. We’re not joking – two hundred and seventy-five million lari. The present government is less generous, but not so much to give 20-30 million lari annually. Can anyone tell us: how much did Georgia or its population benefit from these funds? Maybe some individuals have benefited and some of the Money transferred from this sum has been quietly returned to someone’s pocket? There was, and still is, a reasonable suspicion during the period of power of the previous government. I would like to reiterate that there is no effect on any of the foreign television programs on the runner-up line if it is written that vacation in Georgia is good. Also, they do not write that it is very expensive, because with the same money that a tourist should spend in Georgia, they will have a better rest in Turkey, Egypt, Cyprus … The principle that we – Georgians are good, we know, but before we explain it to foreigners many years will pass and many millions will be thrown into the water.

Children, not just in our country, are the future of every country, no need to talk and explain. This is an area in which no normal state should save money. This is an area that all authorities must constantly think about, and now I will ask a simple and straightforward question: How much money was allocated to children’s problems in the previous, previous, even previous or next year’s budget? I mean those children who are dying of hunger and those who are in danger in the near future? Don’t say now, we have a social package and this includes this problem. Not a social package, dear high –ranking officials, but here, near you, 300 children died of hunger last year, and there is no better prospect this year. While you spend tens of millions in restaurants at the expanse of the state, many parents do not have the money to save their children from starvation. Not just barbecue and khinkali, people are missing out on dried bread and water, and that’s why 300 lives were lost last year – 300 future families will no longer be in nature and in Georgian reality. Did you also know that deaths are mainly in the Georgian population and not in national or ethnic minorities? I am not trying to blame anyone, on the contrary – I am saying that Georgians are dying in Georgia and the state should somehow help it, but this “somehow” will not come out of this year’s already announced budget and no one knows what will happen in the future.

Well, it is a bit ironic, tens of millions of GEL is allocated for the elections and at least ten times more will be spent by the parties in the pre-election campaign. In a year elections will cost as much money as it takes to solve at least 10 years of children’s hunger. Ten years later … another Kovzanadze will come out again and say: We had planned economic growth and the results would not last long. The population may not feel it, but the property declarations of government officials still show that they have really felt the economic growth.

Why such pessimism? First, the pessimist is an informed optimist; And secondly, tell us if there is a reason for optimism and if we have a reason to radically change the situation in the next ten years.