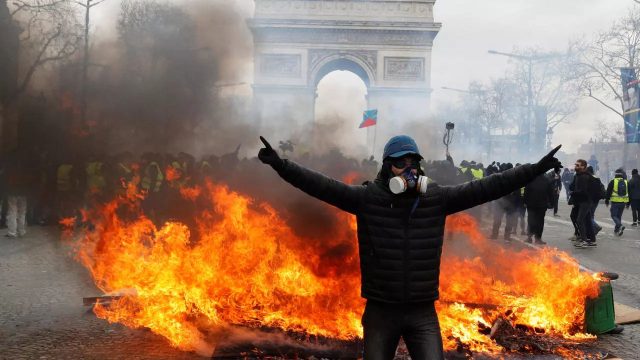 A new type of preachers appeared in educated Europe – the priests of neoliberalism: the more unacceptable and meaningless their postulates are, the more categorical and thunderous they are, like the trumpet of Jericho.

Another pre-New Year confirmation of this was the statement of the High Representative of the European Union (one does not know by whom he was elected) – Joseph Barrell, in which he called on European (and not only European) countries to renounce their identity, their nationality.

Deny, forget, because it turns out identity is destructive, it will kill you, destroy you, make you disappear!

Here is what Barrel Joseph-Zhorica, the Supreme Representative of the Educated Europe, the guru of the formation of our minds, and the highest priest of spirituality, said: “We should abandon the narrow definition of national interests, as well as instead of joining each other because of ethnic or religious values. Identity can kill you. Each of us has our own individuality, maybe even several individuals at once. We must overcome the struggle of identities. We must continue to fight for human rights and fundamental freedoms, to defend the cornerstone of the European Union”.

Has Europe fully understood the essence of these meaningless divergent admonitions – is the fidelity to identity the  nation’s death sentence?

Our publication deals with this topic.

Union. A number of countries do not want to lose their independence and their identity, despite the expected imposition of sanctions by Brussels and the threat of termination of financial assistance. A long time ago, Barrel said the same thing about the Balkans, Bosnia and Herzegovina. There the issue of identity was and still is very acute. People living in the Balkans and Brussels have completely different views on identity, on life in general. There are two completely different cultures. Barrel called on them to start with themselves and unite as a bottomless, unbroken, not-having-history European mass.

When was Europe united ?!

During the repressive regime of the fascist Reich, unification was the result of military aggression.

Does Barrel’s call to modern Europe, including us, who are planning to apply for EU membership by 2024, drive this historic experiment?

According to experts, today’s EU is another attempt to unite Europe on a seemingly peaceful basis, but as time goes on, it becomes clearer that this new experiment will not be possible with the dove in hand. The course of the process has washed away the propaganda layers, exposed the cornerstone and the main direction: you do not want to – you will be forced.

We are also affected by this method, the repressive method of sweets, which is mixed on a voluntary basis: You must voluntarily renounce your identity, and then talk about influence, coercion (whether it will be or not).

Or to say nothing, because we  respect EU membership, EU identity.

But has anyone seen this ideal union that we must a priori believe?

A priori, because, although they tried many times to create a European constitution, but  failed in all cases .

European identity does not exist today. However, they also have a flag and the European Parliament is working, they say that everything will be fine, that we love each other, countries will prosper, wolves and sheep will graze together.

Nikita Khrushchev promised such a future 20 years ago half a century ago.

Thank you, we are full to the brim!

However, unlike Khrushchev’s communism, this time we have to give up our own economy, our own industry, our own national institutions, our own army.

We are talking about a European superhuman of a new incarnation, who will be an example for everyone and a ruler of the world.

According to some scholars, this is a sick, profound, serious problem of European philosophy that characterizes this project and always returns to it from different points.

Theologians argue that, at the same time, this time they are strongly attacking the Christian roots, trying to maintain only something similar to Orthodoxy.

This theory, which is repeated at every new stage in history and ends in catastrophe every time, is again emerging today in the face of new problems: at first in the form of preaching and exhortation with an intensified outburst against Orthodoxy, but the next stage will most likely be violence against oneself and beyond.

Take, for example, the fight against terrorism that Europe is waging by forgetting its own history. Radical Islam, after all, has been strengthened by Europeans in terms of history, faith, culture, traditions, and so on. At the expense of oblivion. Europeans have lost the ability to feel life, while people coming from the East have it stronger and use it for themselves: against this background, various radical currents, aggressive movements, are gaining strength.

Europeans, as researchers say, have fallen into this strange conceptual trap, which is the result of self-denial and weakens them unseen, but still here call others.

Including us because they think they can solve their problems through these others. Strange logic.

But such is the result of the denial of one’s own identity.

Principled experts explain that the way to overcome the difficulties of Europeans is to force others to deny their own identity: so now others, for example, us (Georgians) must convince us to forget our own godliness.

Then we too will become like them, but – the weakest, the weakest over the weak, therefore, their obedience and manipulation with us will be easier hundred times.

What was required to prove.

This principle applies to everyone. It is clear that Europe did not unconditionally succumb to this influence . . .  The Hungarian parliament has passed a law banning same-sex couples from adopting children. More than 100 cities and regions in Poland (which is almost a third of the country) have passed a resolution for establishing the LGBT-free zones. Ursula von der Leyen   President of the European Commission, was concerned and outraged  by this:  LGBT-free zones  are zones free from humanity, they have no place in our union.

And when France decided to pass a law against polygamy, there was such a commotion that the authorities immediately backed down and explained that we only oppose cases where polygamy is forced.

Let us hope that our government will never find itself in such a dilemma.

“We must look for another star now”, which, as the Catholicos Patriarch of Georgia, His Holiness said on December 17 at Sioni Cathedral, on the day of the feast of St. Barbara: “Today we ask for peace, joy, strengthening of the Christian faith, peace in the heart, mind, soul. We are confident that God will hear our prayers”.

And presented to the orthodox parish of Georgia a prayer written by him:

“Our Father, the God of Abraham, Isaac and Jacob! Praise and gratitude to You! In the name of our Lord Jesus Christ, through his intercession   we beseech you to forgive our sins, give us the power to suppress evil and to walk in the way of righteousness. Give us the strength of your obedience. Bless our families, children and grandchildren, our loved ones, bless Georgia and the whole world. We are yours, you saved us. Please, Lord, calm our lives, save us from disasters, diseases, misfortunes. Please, Lord, do not neglect the time of your second coming, but let us rejoice in both villages and exalt you forever and ever, – Father, Son and Holy Spirit. Amen!“