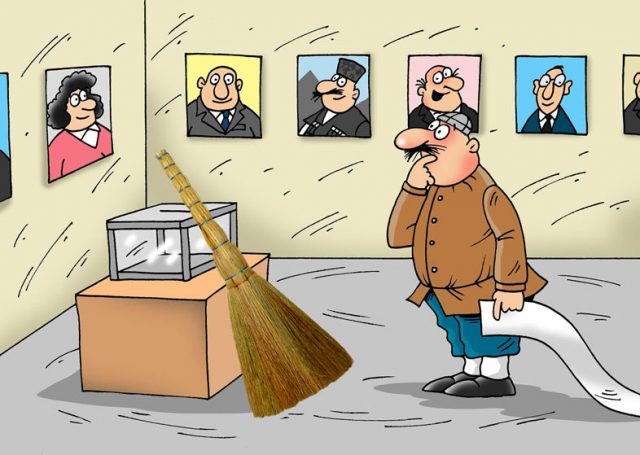 The first round of the 2020 parliamentary elections belongs to history. As expected, despite many attempts, we still have two-pole elections, in which the Georgian Dream and the National Movement are officially fighting each other, and unofficially, they have a wonderful coexistence. Up to 30 deputies will be  from the parliament by the National Movement, up to 90 deputies will be elected by the Dream, the rest will be thrown to the bone and we will be in another circle for the next four years. The foreign policy course, of course, will be Western again, that is, we will continue to knock on the door of NATO (well, at least change your hand during the knock, you will not get sores), again we will ask for EU membership and we will be told: You waiedt 30 years, wait a little longer, about 30 years, too. Unfortunately, this is a reality in which we live, but this election has shown us much more.

“Girchi” got up to 34 thousand votes, that is, the party whose leader publicly says: give me the reins of power and I will announce full legalization of drugs; The leader who does not hide that he is an active user of marijuana and has sown it at home. It turns out that there are 34 thousand people in Georgia who want it very much and, unfortunately, most of them are young. Nearly 300,000 people missed that period, we could not say anything on the phone except to greet each other, when dozens of corpses were taken out of prisons every year, when people were shot in the street, when our taxes were stolen by them for spending good time with   prostitutes, and photos of it were posted on social networks. This should not be called Stockholm Syndrome, but broom  syndrome – if the previous government had held the whole nation hostage and held a “grenade” open like “Zugdidian Zoro”, of course

About 37 thousand votes went to the “Patriots Alliance”, the only party that made it clear in its pre-election promises: we must definitely talk to the Russians. Let us not fight, let us not swear from the international tribune, but let us speak. What comes out? Are only 37 thousand people in favor of dialogue with Russia? And this is at a time when retired European leaders are directly saying that the key to Georgia’s territorial integrity lies with Russia and our country needs to talk to its northern neighbor. Hooray patriotism in general, we have by overdose and we know well the beating of the heart, but when it comes down to it, we refuse dialogue, sitting at one table.

Not elections, but it seems we are victims of a total stupidity Yes, stupidity, and it  manifests itself not only  in the fact that “Girchi” received so many votes. 34 thousand people voted for the complete degradation of youth, the destruction of the future. We are heartbroken Georgians, but not those who do not remember the recent past. The whole of Georgia used drugs and the Georgian paradox was that drug addiction was considered a good guy, especially in Tbilisi. After all, the representatives of the generation that survived say that the generation died then, thousands of talented young people fled to kaif and were buried in the ground. Yeah, these people have gone through all this, they know what an incurable plague is; They also know that if all this becomes large-scale, it will have an avalanche effect, and this avalanche will destroy everyone and everything at the “foot of mountain”.

At the same time, the world is tightening its approach in this direction. Even America, which has adopted a liberal attitude towards drugs, is taking tougher measures because it has realized that the next generation has become a fool and. . . We are easing the approaches in this regard and it is only because it turns out people want to have kaif.

In general, the state approach is to be changed. Now I will name the places where you can go at any time, try marijuana and hashish. . This institution is called ”Factory” and every day several hundred young people stand there, sitting or lying down and doing what  “Girchi” promised them. Well, let’s say marijuana smoking is legalized by the government. Here, where do they come from, can you still find out? Cultivation and especially selling is prohibited by law and why does the government not remove this nest ?! Now, if we say, – the interest of high-ranking state officials in all this, will we not be right? We will be, but what ?!

By percentage, “Girchi” will form a faction in the parliament and the faction has the right to register the bill. Do you think that if the promise is registered and then the ambassadors point fingers at other parties looking to the West, if this law is passed, what will happen ?! They will accept it easily and then we will not be able to prevent the children from doing anything, because, due to a thousand non-governmental organizations, the right to parenthood can be taken away from us.

We do not need any referendum or poll, this election has shown our problems so clearly that no one and nothing could do better. Nor should we forget that because of the pandemic, schoolchildren or students who have gone to distance learning cannot understand anything and do not want to study. Consequently, they have more free time that is not really spent on learning and they spend more and more time on the street. In general, we are not against being on the street, but when drugs are sold almost openly, when gambling is available on the Internet, everything is already dangerous. We are losing the generation, people, the generation that must build the future of Georgia and take care of us. We will lose this generation and we will be left with a drug-addicted, uneducated crowd. Yes, the crowd is called the unity of people who have no education and only think about where to earn money to buy drugs

The most interesting thing is that the losing parties say they rigged the elections and thus directly insult the voters. In fact, they think more people should be supported for drugs, brooms, an uncertain future, a knock on NATO door and a stillborn prospect of joining the EU. This is a direct insult to the nation and I think we deserve it. How did so many people come together, how did they decide, how did they come to the conclusion that they should vote for what we have listed above ?!

Do not feel as if we are die-hard fans of the „Dream“. On the contrary, the fact that the ruling team is still in power is due solely to the fact that the rest do not agree, and in fact, the people have made a choice between bad and worse. We say that even if you choose the worst of the worst, it is already a big problem, you call it a problem of thinking, you say – another thing, but the problem is obvious.

Another year will pass, local elections will come and more than 300 thousand people will be here again and will support torturers and drug lovers at the local level, will already distribute them in the regions. And for some reason we think that is their goal. whose? Here are those who write the constitution and teach us how to live. So what if they do not do the same thing themselves, they realized that it is bad, they look at us like trial rabbits, we also have to test whether it is bad or good and, if we did not justify the case, it means  it is really bad

You will also remember those who did not bother to shout at all – Russia will interfere in this election. Intervened? Did not interfere. And the West? It is the Western ambassadors and observers who legitimize our elections (and not the people of Georgia) and do not say no now. They rewrote the constitution, they wrote the laws, the agenda for us, and what will happen  if they also write  or confirm the voters percent?  Who is a  resister? who?!