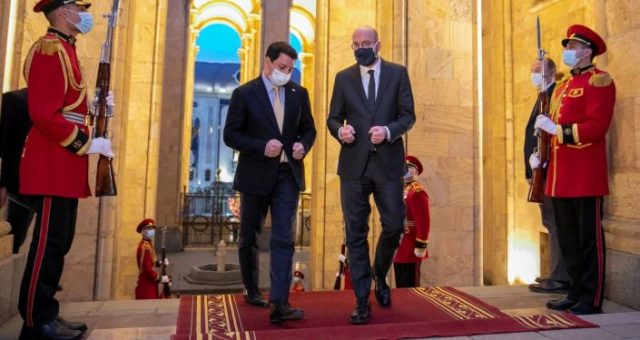 I can not say how many criminal articles have been filed against Mikheil Saakashvili, how many times he has been convicted in absentia, but the fact is that today the ex-president of Georgia is not only free, but also works in a high position in Ukraine, Georgia’s friend and strategic partner. The same is true for  Zurab Adeishvili, for example, but this time we are focusing specifically on the highest governmental person –  president.

We do not know whether Georgia has sent a request for Saakashvili’s extradition, to Ukraine. It would be even ridiculous to do so, because the Ukrainians know for a fact that for us he is a criminal, but they have a green light from the west and therefore do not let Misha get a cold breeze. That’s when a country can’t even send a request to a friendly and strategic partner state for the extradition of a criminal, because it knows it makes no sense, it should have no claim on anything else,  should not want to join the European Union, to join NATO.  Why? If France, a member of the European Union and NATO, were to ask why it is not possible to catch a criminal, since he is neither hidden nor in a closed country, what would we answer? France will have the answer – Nicolas Sarkozy was sentenced to three years in prison last week. It is true that Sarkozy will spend one year in prison during these three years, the other two are conditional. Sarkozy is the first president in French history who is  arrested, though the reason for his sentencing should not be simply to facilitate a career for judges. After leaving the presidency, Mr. Nikolas revealed a number of secrets, including the interesting one for us, saying that Georgia and Ukraine will never be admitted to NATO. Sarkozy’s arrest was not protested by the civilized West, on the contrary – they proudly declared that no one is inviolable, but that we are dealing with a double standard, it is easy to understand. If Sarkozy is not inviolable, why is Saakashvili ?! The only reason, they said, was that the ”Georgian Dream“ was using Saakashvili as a threat, and the West needs Saakashvili in order for there to be constant tension in  Georgia  on one hand, and in Ukraine, on the other hand. If anyone thinks that Misha is not a headache for Ukrainians, he is very mistaken. At first Poroshenko tried to get rid of him, but in the end he got rid of himself, and now Zelensky wants to do it, but nothing comes out of it/

All taken together, in a literal sense, is interference in the domestic affairs of the country and nothing else. After the collapse of the Soviet Union, Europe and America stubbornly sought to gain control of 14 republics. The Baltic states were excluded, Belarus and Azerbaijan helped themselves, the Central Asian republics were not interesting and Armenia, Ukraine, Georgia and Moldova remained. If you look closely, as soon as these four countries threatened to reduce Western influence, the government changed immediately. A revolution has taken place in all four republics and will happen again if the rulers do not believe in the West and do not declare Russia as their first enemy.

The last clear example of Europe and America being rudely interfering in domestic affairs was we had last week. A classic example of this was the visit of the President of the Council of Europe Charles Michel to Georgia. A man from Europe came to raise an ear to the top officials of the government and in the end he did it well  (now do not tell me what terms you use, the terms should be such that our politicians speak).

Prior to Michelle’s visit, government officials were adamant that they had nothing to say to the opposition as they issued ultimatums, but as soon as they saw the bearded man, they immediately lowered their tone and not only sat down at the negotiating table, but also promised not to bother, we will arrive in Brussels on March 16 and take the assignment there. Yes, it is Michelle who instructed Georgian politicians with  memorizing phrases, and they are preparing

We’re not just talking about Michelle. It is enough for any ambassador of a European country to call representatives of both the authorities and the opposition to his residence, they will immediately run away, they will not be late for a second and will smile in their eyes with  a calf’s excitement.

A few centuries ago, when there was a slave market in Istanbul, merchants walked around and checked the teeth of slaves. The Georgian political spectrum is in about the same situation. Western merchants come and check  teeth at the politicians here, and they decide who will be a mamluk and who – a castrated, and who will decorate  harem. This is a chronicle of declared slavery, nothing more. But, the trouble is that there is no politician in Georgia who is not encouraged by such a situation of slavery. Everyone agrees to be the first to kiss the hand or knee of anyone who helps to gain and maintain power. In general, we accept one large complex group, which internally, subconsciously, does not get used to slavery and then seeks revenge on another, and this  another is Georgian population, which, in the literal sense of the word, has been tortured for 30 years and could not be eradicated because it turned out to be very viable. Neither famine nor war can kill us. . . Therefore, they have taken us captive, enslaved us, and thus satisfied their  desire for our extinction. Captives still have some rights, but slaves do not, and that is exactly what the Georgian political spectrum has today. Nobody offers our politicians a choice, they give them a piece of a written paper and tell them that they have to live and work according to the agenda that the West wants.

Let’s turn it around and assume that the Georgian ambassador to Germany summoned Angela Merkel to his residence, or that the Georgian ambassador to France summoned Emmanuel Macron and, for example, protested the arrest of Nicolas Sarkozy  by reason that  that man was our friend. What do you think will happen? In the best case, the Georgian authorities will  be  forced to recall the ambassador, and in the worst case, not only his political career, but also his freedom may end and he may be arrested as insulting. Nobody will allow Georgian ambassadors to do this for the next half a century, and according to the most optimistic forecast, this is the period that NATO needs to open its doors to us. Well, France is not accidentally mentioned above, it was French President Emmanuel Macron who said: it is time for the EU to think about new defense capabilities and say goodbye to NATO. Earlier, in November 2019, Macron also said: We are witnessing the brain death of NATO, this organization is dying. And we, to get us into this dying or already dead organization, send our boys to Africa and Afghanistan for slaughter.

It is very easy to run a country where sometimes Gavrilov is called, sometimes – NATO and the European Union, sometimes several thousand young people will take to the streets demanding the legalization of drugs. The main part of the population, which really cares and cares about the future of the country, cares about buying a piece of bread, because their children and parents are starving to death, they do not take money in exchange for rallies, and if they take to the streets, they are exposed because they are really in pain. Nothing else they  care about. Such people have been avoided by their Western partners, and all this has been facilitated by local politicians, because no one needs a sensible part of the society. They want a zombie, drug-addicted generation that is easy to control.

March 16 will come soon, a number of politicians from Georgia will go to Brussels to kneel and confirm their wordless obedience. Then words of European merchants  will be translated  differently, adapted to  themselves (and not the country) and they  will try to convince us that Europeans are on their side and not on side of their opponents. And, we will be left with only show without bread: sometimes we will listen to secret recordings and then witness its authenticity, sometimes the road will be blocked, sometimes we will look at photos of ghomi cooked in tents in front of the parliament, and this year will be exactly like last year and last year. In the official slavery!