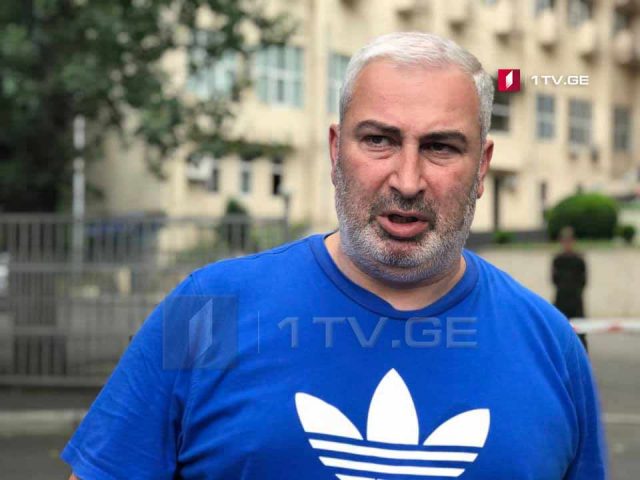 Georgian Dream has been calling the nationalists murderers, criminals, and traitors to the homeland for nine years, but Ivanishvili and his team, who came to power in 2012 with a promise to restore justice, embarrass voters and limit themselves to curses. What do the voters think? Why aren’t the criminals in jail? Why have the main culprits of the previous government, including Saakashvili, not been indicted? – Ramaz Gagnidze, founder of the Georgian Mission, and Gulbaat Rtskhiladze, head of the Eurasia Institute, talk to us about these and other important topics.

National Movement has declared the war on dirt to the Dream

– The National Movement feeds the Dream and vice versa… Itэs as simple as two times two is four, and we have been witnessing it for nine years.

There are several obvious reasons for the governmentэs behavior – the Nationals have dirt on members of the Dream, who at first were not even considered in the Georgian Dream, but Bidzina Ivanishvili was forced to bring compromised people to power, and he was forced by such people, whom Ivanishvili could not refuse. The National Movement declared a war of compromise on the Dream.

– This is a very serious accusation. What gives you grounds to say so?

– You don’t need grounds for that, it’s not my opinion. Cohabitation was also required so that compromising information recorded by the Nationalists would not be disclosed. They have compromising videos of most members of parliament; they also have footage from the lives of their so-called Western partners, those “partners” who today actively support the Nationalists and blackmail the government.

The West is now busy supporting the Nationalists who raped men, justifying them, because the “Mishists” are threatening to publish the footage they recorded. The Nationalists have compromising information on everybody – ambassadors, EU representatives, European Parliament, so they and some deputies of our parliament have agreed with the members of the National Movement: – Keep silent, we will do everything for you. They have invented cohabitation and before every election they shout: “Misha is coming!” This suits both Misha and the government.

Almost every night the “Nationalists” and the “Dream” get together in restaurants and, as usual, have banquets. These banquets are attended by Mdinaradze and many high-ranking officials, who often repeat the word “murderer”.

They make silly accusations against Misha – the president was a man and he is accused of embezzling the budget. No one dared to say out loud that Misha himself led the violence against men in this country, he watched all the footage that showed men being raped. Today this scumbag denies everything and says he didn’t know Meghis Kardava and “Mastera” but the government knows and people know that it was Saakashvili who ordered all this and that there were many perpetrators, including Kardava and “Mastera”. Besides this horror, if the authorities had a desire to press charges against Misha, what other reason would they want for it! Cohabitation has covered everything up.

Saakashvili is a murderer, a rapist, a rapist of men, Satan and finally a budget thief, but Bidzina justified his crimes. First Misha ruled Bidzina, now Bidzina rules. It is a gang, a gang that is destroying Georgians. There is no other country in the world where people hate politicians as much as we hate them.

So, we know more than they realize.

It is true that most of the electorate behaves as the government says, dances to the music the government orders, and the expression: Every nation deserves its ruler is true, but fortunately there are people in this country who understand everything and know everything.

“Saakashvili is a politician, however comical, but a politician who should be arrested, even though he has not been adequately charged.”

– The call “murderer” is cheap populism. Such rhetoric of state officials is designed for the electorate. The Dream voter is gullible, and this, unfortunately, is an insult to the rest of society.

The Dream tells the people, the voters: – They are murderers, but I let them into the parliament, I asked them to enter the parliament, I cooperate with them when I need it, and I always need it, but when necessary, I tell you that they are murderers – it turns out that Mdinaradzes and their like consider the people fools, and if this is not true, then those representatives of authorities who call nationals murderers and do not arrest them should be tried for slander.

Such statements by the authorities before elections are the fault of those voters who listen to their arguments, but they have no questions – then why are you defending them and why are murderers running in elections?

There was an interview I did in the Georgia & World newspaper in 2013 where I said that the Dream and the Nationals help each other to exist. I was also the first to say that the National Movement should be banned. There was no Mdinaradze or anyone else at the time. Bidzina got the rats out in the political field. It may not have been Bidzina’s initiative, he was asked to remove the “old guard” and bring the new one into the arena.

– Most of the voters are not stupid at all, as everyone has a question – if the representatives of the National Movement are murderers, why aren’t they in prison according to the relevant article? Why hasn’t Saakashvili been charged? Is he guilty only of buying jackets on the budget money? In my opinion, Saakashvili’s main crimes are unleashing war in 2008 and giving thousands of hectares of land in Kvemo and Shida Kartli to Boers who are now making Georgians work for daily wages and not even coming and just taking millions out of our land.

– What are you talking about!!! Saakashvili’s mother got some huge buildings for nothing, or rather, as a gift. She was indeed given many hectares of land in Tabakhmela, but leaving all that aside, including the gifted land in Kvemo and Shida Kartli, the crimes committed in the 2008 war were enough to convict the ex-president for high treason. Saakashvili himself condemned many innocent and also non-political people on trumped up charges of high treason.

Saakashvili is a politician, however comical, a politician who should be arrested even though he is not adequately charged. If he comes and is arrested, he will be sentenced to some five years only…

Saakashvili should be arrested; he should be court-martialed for starting the 2008 war. Some dumbasses say that how could he start a war on his territory, but he started a war on his territory. Saakashvili did not demand the withdrawal of peacekeeping forces from Tskhinvali, he did not delegitimize those forces, he attacked those forces. He also attacked civilians whom he called brothers. Civilians were killed in Tskhinvali, Saakashvili launched Grads there, Grads are not launched on target, they massively destroy everything, and using them is a crime. This government, if it really wants to put Saakashvili on trial, should charge him with these crimes, that’s the easiest process.

– Why aren’t they doing that? Most voters want to see Saakashvili in the dock! I can say this because a very small part of the population participates in the elections, the “Dream” disappointed them precisely in restoring justice…

– The authorities are not interested in the opinion of the voters. Any votes they get in elections will be enough for them to win.

However ridiculous it may seem to you, there are exactly the same processes going on in Georgia as in Europe, although it is inconceivable to compare existence there and here. Our government is trying, as in Europe, to form a coalition government. The ruling party will take 30 percent of the vote and go into coalition with the party with lesser share of the vote, whoever that may be. The authorities don’t hide it. They don’t respect the voter because they think people are one-celled creatures. If a person is a murderer, why isn’t he in jail? And if you don’t think they are real murderers and don’t put them in jail, then don’t say that word in front of the voters, because none of us are stupid and everyone knows everything very well.

An alienated and feuding society suits the government, it is despotism, and it is the most dangerous. On the surface it is democracy, but in reality, it is despotism. The main thing for a despot is that people do not like each other. Ivanishvili is a despot, thanks to which the “divide et impera” principle applies in the country. This applies both to the government and the people. Ivanishvili is threatened neither by politicians nor by people.