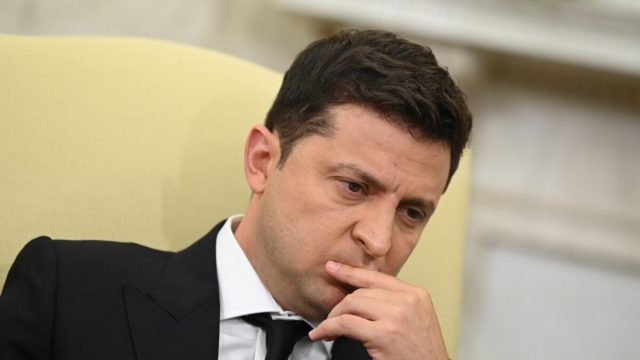 You may remember that during Donald Trump’s presidency we wrote many times that the Americans wanted Georgia to start a war with Russia and America to fight Russia to the last Georgian. Fortunately, the government withstood the pressure, did not succumb to provocation, and we survived the war and disaster. That is why we survived, because what the West was preparing for us was clearly shown by the example of Ukraine.

There is an impression that the West, and specifically America, is going to fight Russia until the last Ukrainian. In principle, what an impression, here, NATO Secretary General Jens Stoltenberg directly said: our goal is to do as much damage as possible to Russia to weaken it. The same thing was repeated by Joe Biden, the leader of European countries. . . Zelensky did not hide either: there are countries that want this war to last a long time and to harm Russia at the expense of the lives of our soldiers and citizens. Yes, that’s right, at the expense of Ukrainians lives. . . And there was a very good chance that we would have been Ukrainians instead.

After the talks in Istanbul, Recep Tayyip Erdogan was pleased to announce that there was an opportunity to cease fire and end the war soon. Erdogan did not talk about the details, but both the Ukrainian and Russian sides seemed not unhappy with the talks and the ceasefire talks were in an active phase. And, an hour after Erdogan’s speech, the British Prime Minister (as if  Churchill of our time) Boris Johnson held a briefing and solemnly announced to the public: We have decided to help Ukraine with armored vehicles and to provide heavy weapons. What came out? The two sides involved in the war, the mediating side, are making a ceasefire statement, and at this point another country is shouting: What a ceasefire, here you are, armor, guys, fight.

We can say with certainty that Zelensky realized what a problem the country was in, that when and with what outcome the war should end, Ukraine would be a slave to the West for at least half a century, and the economy of Europe’s largest country would depend on the West. The West will pursue its interests, the West will begin to rebuild ruined and land-leveled cities, and will delay this process for as long as it wishes. Zelensky’s main misfortune is that he can no longer take a step back, he preferred to pull in, and now, no matter what happens, he can not take a step back. The only solution is for Zelensky to officially declare: we no longer want weapons, we no longer fight, negotiations have no alternative.

Most interestingly, the Ukrainian side has a document on the table that Russia requested to sign before the war. Ukraine is ready to sign this document and what will happen? What could have happened without war, what could have happened without the sacrifices of thousands of people, the same thing is happening now, but at the expense of ruined cities, lots of dead and filthy infrastructure and economy. If the wheel of time were turned upside down and Zelensky knew what would happen after the war, he would inevitably avoid war, reject all offers from the West, and reluctantly agree to what he now has to agree to. Exactly the same scenario that was in Georgia in 2008 was repeated in Ukraine. After Saakashvili was elected president, they were called the beacon of democracy, the door was wide open in Europe and America, they believed that NATO was in one hand. . . Shot. As it turns out now, Ukraine was opposed to all this, and Zelensky himself had little faith in the Western perspective. Just like Petro Poroshenko, whom Saakashvili was sacked as the governor of Odessa like a cuckoo’s egg, but Poroshenko “did not eat” the theme of the war, Saakashvili was kicked out in the interests of his own people and. . . Instead, the West put a clown  in the president’s chair.

Saakashvili’s second attempt was successful. The reforms, which have a one-day effect, surprised the Ukrainian official just as they did in Georgia at the time. No longer needed. But when Saakashvili came to Georgia, he had Western guarantees that he would return to power here and get involved in the Ukraine-Russia war, but free Misha was dangerous even for the West, so he was “put to sleep” in a Georgian prison for six years. The fact that the West no longer needs Saakashvili for anything is clear from the decision of the Strasbourg court, when the ex-president was practically turned over to the complaint and explained that the West should no longer have any hope. If you look closely, after a few harsh statements made by Zelensky, he was met by EU officials and promised that if you were not accepted into NATO, you would be accepted into the EU. Yes, after Stoltenberg said after joining NATO, Ukraine will not be a member of the alliance, but it will receive more than the members, so it sounds like we were expecting a map and giving us a better map. As we received in the EU after the war, so will Ukraine, though. . . Apart from the promises, Zelensky can not offer anything to the people of Ukraine, and after the end of the war he will definitely have to resign; At best, calling snap elections is exactly what Saakashvili did, and then he won the election with the help of the West, through terror and rigging. . . Zelensky still demands weapons and is increasingly critical of the West.

Ukraine has not yet received enough modern Western anti-missile systems, it has not received aircraft, it has not received what its partners could call for. You could and still can! Every Russian rocket that hit our cities, and every bomb that was dropped on our people, only adds black paint to the history that describes everyone on whom the decision was made; The decision to help Ukraine with modern weapons – says Zelensky and, in fact, confirms what we said from the beginning – the West wants the war to last as long as possible.

The joy of the West, Russia can not enter Kiev, is almost like Misha was happy in 2008, the Russian tank turned to Orchosan, did not come to Tbilisi and only then realized that Russia did not need Tbilisi in anything, just as Kiev does not need anything. But now it will not be said out loud, because the western heroes will appear in the eyes of the Ukrainian people exactly as they look in the eyes of the Georgians.

Black paint adds to the story that describes everyone on whom the decision was made – Zelensky’s words will surely be remembered in the near future, when the war is over, everyone will understand everything and everything will be named after him, but it will be too late and it will be too late because no one can He will resurrect the dead on both sides and no one can comfort their families. Until then, the West will try again and again to postpone the end of the war as much as possible. Nor is it out of the question to try Zelensky’s assassination and warn the president in such a way as to dismiss the thought of ending the war and indeed fight to the last Ukrainian. Everyone realizes that, despite the vast resources, there is no state in the world that has inexhaustible resources, and this is the main goal and reason for the West to continue the war – if Russia does not run out of resources, it is significantly reduced, and this is the main goal of this adventure.