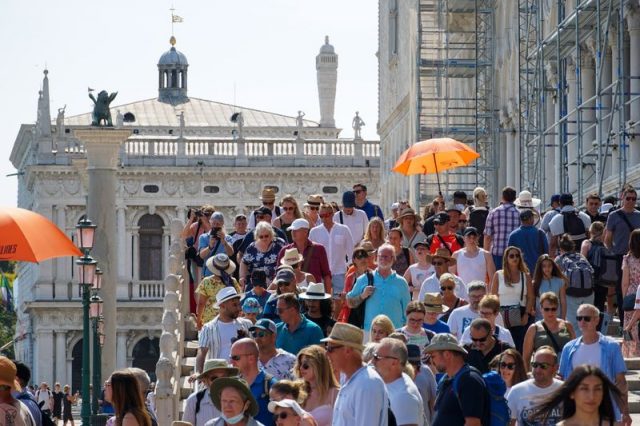 On a recent afternoon in Venice, a visiting family spread a tablecloth over the top of an historic well to lunch on homemade food amid the Renaissance-era ambience. It was a thrifty alternative to spending money at local eateries, but authorities were having none of it.

“They have been severely fined,” said Simone Venturini, a Venice city councilor, who’s leading an initiative to shift the city’s tourism industry to quality over quantity.

The clampdown on the misguided picnic was part of a broader effort to weed out tourists who clog streets and strain the city’s infrastructure but offer little to the economy — namely, day-trippers.

The city has determined that when more than 30,000 to 40,000 people show up for a day of taking selfies at the Rialto Bridge, squeezing through St. Mark’s Square and shuffling past the Doge’s Palace, they do more harm than good.

To weed out cheapskates, the city plans to charge day-trippers a fee of 3 to 10 euros (about $3.20 to $10.60) for access to the city starting in January. While officials are still determining final details, including how to charge and enforce the fees, the target encompasses hot spots along the Grand Canal as well as peripheral islands such as Lido, Murano and Torcello.

There’s also local opposition to overcome. Some shopkeepers fear entrance restrictions send the wrong signal and is out of touch with Venice’s roots as a trading nation.

“The aim of the measures is not to cash in but to protect Venice,” said Venturini. The city “with its frailties isn’t suitable for ‘fast food’ tourism.”

As the world emerges from two years of pandemic restrictions, the splendor of Venice’s canals and the allure of its winding alleyways are again in high demand, with 120,000 people visiting over the Easter weekend. But city officials and many business owners are keen to ensure the comeback is sustainable.

“The meaning of traveling has deeply changed over the years,” becoming a checklist to mark off, said Giuliana Longo, owner of a shop near the Rialto Bridge that sells hats to gondoliers; it’s been run by the women in her family for more than a century. “But, in some places, people need to go to enrich their heart, soul and mind by enjoying beauty, and Venice is beauty, with a capital B.”

She backs the entrance-fee plan, but says the city should make it clear that the money is used for a specific purpose, like preservation or environmental mitigation.

Others are less supportive. Ernesto Pancin, director of an association that represents bar and restaurant owners, believes the administration shouldn’t impose restrictions on the historic parts of the city, but encourage day-trippers to explore lesser-known areas at peak times.

“Central districts like Castello and Santa Croce are beautiful, but they stay empty most of the day and would finally come back to life,” he said. “Venice is a city of the world. Every person coming from the other side of the planet has the right to see it, booking or no booking.”

The pushback against day-trippers bears similarities to Amsterdam’s efforts to weed out sex-and-drugs travel as top European destinations recognize that not all visitors are welcome.

The risks of unregulated tourism are even more acute for Venice. Flooding, known as “acqua alta,” has become more frequent, with the worst surge in more than 50 years causing an estimated 1 billion euros in damage in 2019. To protect the city, Italy’s government approved measures last year to ban large cruise ships in the Venetian lagoon.

Pressure to act will become even more evident this summer as consumers spend pandemic savings on travel. The number of visitors to Italy’s top 100 historic cities — including Venice, Rome and Florence — is projected to jump about 25% to 27.4 million people, according to trade association Assoturismo Confesercenti.

“You can’t allow a city like Venice to be devastated by hordes of tourists,” said Dina Ravera, founder and chairwoman of upscale tour operator Destination Italia SpA. “It’s an open-air museum and to preserve it it’s necessary to limit the flow of people. Otherwise, it would be like leaving the doors of the Louvre open,” she said, referring to the Paris museum that’s home to Leonardo da Vinci’s Mona Lisa.

For Venturini, policing bad behavior like the picnicking family is part of sending a signal that visiting Venice is a two-way street, which at the very least demands respect for the city’s unique heritage.

“I don’t think they will ever do anything of that sort again,” he said.