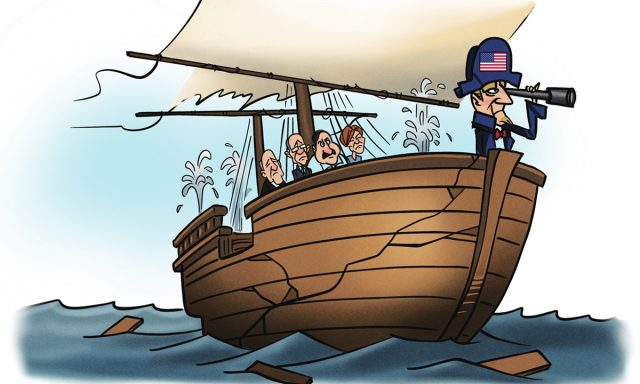 This month, G7 countries and Australia will set a fixed price when they finalize a price cap on Russian oil. In response, Russia said that it will refuse to ship oil to countries that set price caps. The Ukraine crisis is still in a deadlock, and the stability of the global market and supply chains have been severely damaged. However, the US and the West are still keen on engaging in a “sanction and arms race” against Russia and continue to send weapons to Ukraine. Meanwhile, they promote “de-Sinicization” in the global supply chain and core technology industries such as chips in the Asia-Pacific. At a time when international cooperation mechanisms such as “BRICS+” are striving to drive the world out of the haze of the pandemic and conflicts, US allies are still coordinating with US unilateralism and advance the fallacy of “decoupling.” As a result, they have become increasingly isolated in the international community.

First of all, the confrontational thinking of the Cold War mentality maintained by the US and the West has gone against the general trend of today’s global landscape. Since February this year, the US, Europe, and Japan have imposed a stunning number of sanctions against Russia. Behind the unilateral sanctions is the narrow “conflict and confrontation” mentality, which divides the world into two camps, puts the geopolitical interests of the US and its allies above the common interests of the international community, and ignores the general consensus that human society is one with a shared future. Meanwhile, it hinders the arduous efforts of all countries to jointly pursue economic recovery since the outbreak of COVID-19 pandemic and even makes developing countries, which are eager to stabilize supply chains and prices, ensure energy and food security, and pursue post-pandemic economic recovery, the biggest victim. Such perverse acts are obviously unpopular in the international community and cannot last long.

Second, it is against the international concept of win-win cooperation that US allies coordinate with the US to form “small cliques.” The interests of all countries in the world are highly integrated, and win-win cooperation is the general trend. However, in recent years, in order to achieve the goal of suppressing China and Russia, the US has frequently wooed G7 allies, activated NATO, a “Cold War relic,” and established the AUKUS alliance to arm Australia. All these moves are pushing the world into the abyss of division.

In contrast, BRICS and other mechanisms have continuously strengthened practical cooperation in global poverty reduction, food security, development financing, connectivity and other fields, and have been increasingly recognized and supported by developing countries. Nearly a year since the Regional Comprehensive Economic Partnership (RCEP) came into effect, it has injected strong impetus into the growth of trade and economic recovery in the Asia-Pacific region and even the world, and continuously boosted the confidence of regional countries in win-win cooperation. The SCO has also played a prominent role in counter-terrorism cooperation, political consultations, and mutual learning between cultures and civilizations.

Developing countries and emerging economies are taking practical actions to forge a path of financial, trade and security cooperation that is not dominated by hegemony. The US-led small circles, which ignore  the trend, will only isolate themselves in the end.

US’ allies should proactively embrace the global tide of mutual respect and win-win cooperation to drive the world out of the trauma of the pandemic. Over recent days, leaders from countries in Asia, Africa and Europe successively visited China for cooperation. The visit of General Secretary of the Communist Party of Vietnam Central Committee Nguyen Phu Trong displayed that China and Vietnam can properly handle the divergences in a mature manner, and jointly safeguard regional peace and stability.

President Samia Suluhu Hassan of Tanzania said, during the recent trip, that Tanzania views China as its top real friend and will always be a trustworthy partner for China. He also noted that Tanzania will work with China to strengthen practical cooperation across the board, take the relationship to a new height, and turn it into an exemplar for Africa-China relations in the new era. German Chancellor Olaf Scholz’s visit has sent two signals. First, decoupling with China is neither feasible nor desirable. Second, European countries can decide their own foreign policies and do not need to follow the US. This reflects the rational thinking of Germany as a major European power.

US allies should also wake up to the US hegemonic plot to harm others while benefiting itself. The essential aim of US sanctions against others is not to maintain peace, but to maintain hegemony. The US needs allies to check and balance China and Russia, and it is willing to see its allies suffer from the backlash of sanctions. The US has realized its own energy independence, but it has been instigating Europe to formulate a strict “de-Russification” energy plan. When former Australian prime minister Scott Morrison was in power, Australia, a vital ally of the US in the Asia-Pacific, proactively handcuffed Australia’s foreign policy to the US against China, causing significant damage to the stability and development of the region. Ironically, affected by the strained China-Australia ties, the market share of coal and barley that Australia exports to China plummeted, and Australia’s “friends,” such as the US, quickly filled the gap.

Today, when conflicts and divergences are becoming more and more acute, US allies should abandon this Cold War confrontation and “small circle” mentality, and should seek to uphold the spirit of seeking common ground while reserving differences, and return to the right track of cooperation and development. For instance, they should pragmatically create conditions for the Ukrainian crisis to be resolved through political means, and stop cooperating with the US unilaterally when it comes to imposing sanctions. One could get hurt when adding fuel to the fire.

The author is a research fellow of the Department for Asia-Pacific Studies at the China Institute of International Studies. opinion@globaltimes.com.cn