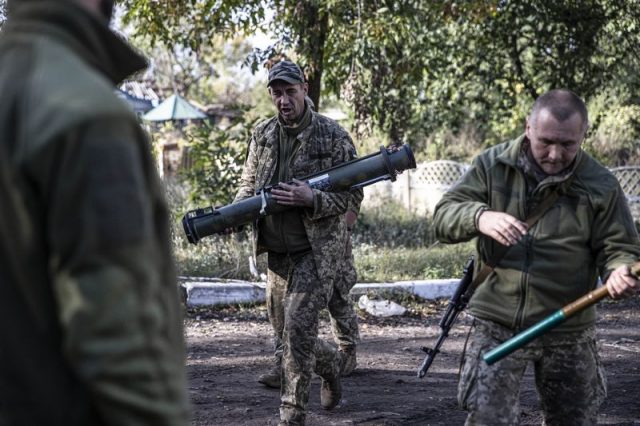 Kyiv is increasingly worried that allies will become even more cautious about sending the kind of weapons they fear could provoke a direct confrontation with Russia.

Ukraine’s military is on the offensive against Russian forces and asking for more powerful weapons to press its advantage, but so far there is no sign that allies will step up their commitments.

While supporters have piled arms into Ukraine since Russia invaded in late February, they have shied away from sending the longest-range missile systems, combat aircraft and NATO standard tanks.

The fear now in Kyiv is that, despite US and European assurances, Putin’s threats of escalation could see its allies balk at the delivery of weapons they see as risking a direct confrontation with Moscow. And with Russia drafting as many as 300,000 new recruits, the current offensive’s window for a quick breakthrough may be closing.

“The best response to Russian escalation: HIMARS, ATACMS, Abrams, Leopards,” Mykhailo Podolyak, adviser to the Ukrainian president’s chief of staff, said on Twitter on Sept. 21. Ukraine has been pressing for months to receive the ATACMS —  rockets with a 300km (186 mile) reach — alongside other equipment needed in quantity to mount a sustained counteroffensive.

Still, it’s unlikely there will be any dramatic increase in weapons flows, or any new taboos broken in terms of their type, according to a senior European official, because the US is cautious and Europe’s own stocks of key weaponry are running low.

What Russia says “does not affect” the US Defense department’s approach to supporting Kyiv, Pentagon spokesman Brigadier General Patrick Ryder said in a briefing the day after Putin’s speech, noting that appropriations for Ukraine now had horizons of up to two years. Yet that approach has from the start involved a graduated process, in which decisions on what to send to Ukraine are calibrated to, as President Joe Biden put it in March, avoid provoking another world war.

“Of course they will be more cautious,” former Defense Minister Andriy Zagorodnyuk said in an interview in Kyiv, referring to Ukraine’s allies. “But people need to decide, because Putin will be playing with the nuclear stick as long as he sees that this works as a deterrent.”

The answer is not to try to avoid escalation, because that is already happening, according to Zagorodnyuk. He cited the partial mobilization and annexation plans for Ukraine’s occupied area that Putin also announced in his speech. In the same address, the Russian leader vowed to use “all the means at our disposal” — a reference to nuclear weapons —  to protect territory he defines as Russian.

“They need to show him that retaliation is coming, that it is guaranteed and it’s going to be very very serious, that his collapse will be immediate,” Zagorodnyuk said.

According to four officials familiar with the pipeline to Ukraine, there are no signs of any move by European governments to provide Kyiv with a fresh round of heavy weapons.

The people identified German Leopard tanks as a particular bone of contention, because several NATO members — including Spain, Netherlands, Norway, Greece and Turkey, plus NATO candidate Finland — use them. Yet they can transfer the vehicles elsewhere only with permission from Berlin, which has not yet come.

A person familiar with the matter said so far there had been no official requests of Berlin by other states to allow the export of Leopard tanks to Ukraine. A spokesperson for the German economy ministry, which handles licensing weapons exports, said they could not comment on potential pending applications.

Ukraine has received tanks, including from Poland, which has delivered more than 250 to date. But only Soviet design models have been sent. With its own stocks running low, Poland is waiting for a delivery of 116 Abrams M1A1’s from the US early next year to ensure its own needs, before sending more to Ukraine.

New shipments are also unlikely in the short term, due to shortages.

The US is reviewing requests to provide more powerful weapons, with one Pentagon official saying earlier this month the administration may provide the Gray Eagle drone, which is armed with Hellfire missiles and would mark a step up in airborne assistance.

But the Biden administration has been wary of providing fighter jets for fear that doing so would broaden the conflict to include NATO. It also says high-tech items like the latest-model Abrams tanks would require extensive training and maintenance. It is not clear Ukraine is demanding the latest models.

A White House official pushed back against the Ukrainian viewpoint that the US was reluctant to send American-made tanks out of concerns that Putin might escalate.

In Italy’s case, a lack of funds and approaching elections had already pushed Ukraine down the list of government priorities, even as outgoing Prime Minister Mario Draghi remained a strong supporter of Ukraine. The flow of arms to Kyiv slowed since July, according to two persons with direct knowledge of the Rome government’s plans. A right-wing coalition led by Giorgia Meloni won Sunday’s vote and has pledged to stick to Italy’s policy on sanctions against Russia, although her allies have taken more Russia-friendly stances in the past.

While ATACMS likely will remain problematic, because of their potential to strike deep into Russian territory, combat aircraft and more tanks are probably coming —  even if they remain Soviet, rather than NATO standard, according to Zagorodnyuk, who was defense minister from 2019-2020.

“They won’t come in a spike, but in a gradual decision making process,” tied more to particular operations than sweeping demands, because the US and some other Ukrainian allies are now deeply involved in the military planning process, he said.

Ukraine does have some support for its position, especially from eastern European neighbors, although their resources are limited. “Because now is probably the decisive moment,” said Lithuanian Prime Minister Ingrida Simonyte. “It’s very very important that we don’t miss it.”

The flow of arms to Ukraine nevertheless has been impressive. The State Department says the US spent $15.1 billion on security assistance to Ukraine since the invasion’s Feb. 24 launch, while Germany — often criticized as a laggard — said it delivered 734 million euros worth ($711 million) in the year to Sept. 19, including Gepard mobile anti-aircraft systems that helped enable the successful counteroffensive in the north eastern Kharkiv region.

Seen from Kyiv, though, the story of the war has been one in which the US and other allies have slow walked provision of each category of weapons, as they try to calibrate what can be delivered without prompting escalation from Russia.

At times that has triggered criticism — encouraged from Moscow — that the North Atlantic Treaty Organization is willing to help fight Russia to the last Ukrainian, but not to see them win, something Ukrainians are now convinced they can do.

“Today we are so strong and no one thinks anymore that Crimea will remain with Russia,” said Oleksandr Gomon, head of the military administration in the district of Obukhiv, just outside Kyiv, where he transferred from the now occupied Kherson region before the war. Like many in Ukraine he was dismissive of both Putin’s mobilization and nuclear threats.

“We’re just waiting for the lend lease, for the heavy weapons,” Gomon said, in a reference to massive US military aid to its allies during World War II. He was speaking at his office outside the capital, where he has established a training school for new troops and drone operators and commands roughly 10,000 territorial defense personnel. “We’re ready.”