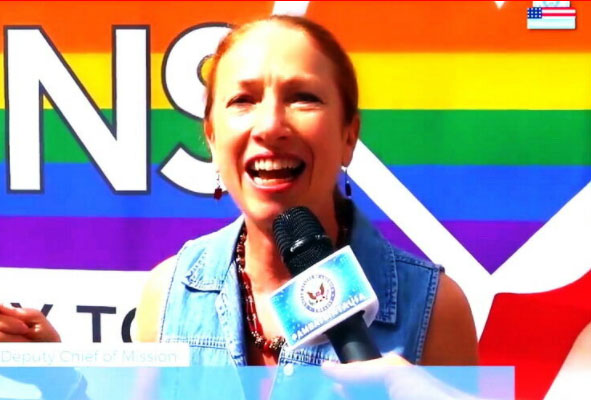 The events that took place in Georgia on the 5th of July  have been a topic of discussion all week, not only domestically, but almost worldwide; ordinary people living in Canada, America, various European countries wrote in social networks that it would be good if a group of people appeared in their country too, which would stop the imposed liberalism and allow normal people to live normal lives. Here, another interesting thing has happened – everyone who has held a microphone at least once in their life or published a phrase in a newspaper has suddenly remembered that they are “journalists” and started expressing solidarity with battered journalists…

Of course we dissociate ourselves from any kind of violence and condemn violence not only against journalists but also against people of any other profession. We offer our condolences to the family and friends of Alexandre Lashkarava, the cameraman of Pirveli TV. The death of every Georgian is a tragedy for the country. Let’s also say that the shouting by members of the National Movement that Lashkarava had two children, while pointing at the government, is disgusting.  It is also disgusting to score political points at the expense of someone else’s tragedy and when it comes to children, then  Koba Davitashvili had five children and Sulkhan Molashvili had three and the list, unfortunately, is too long. We are writing this specifically for the “nationals” to hear us. We are repeating – it is very, very bad when a young person is leaving this world and it is very important to wait for the conclusion of an objectively conducted expert assessment.

As to the journalists against whom aggression has been launched, don’t you think, colleagues and friends, that the policy imposed by the heads and sponsors of TV channels is to blame for all this? Don’t you think the aggression has started after the fact that for years you have been interfering in the lives of ordinary people, making stories about their tragedies, meddling in private property without asking, and then shouting at the top of your voice that your work is being interfered with, that is, that you are interfering in someone else’s private life? Didn’t all this happen because you harassed those tens of thousands of people who went to the rally onthe 5th of July, calling them slaves of Putin and broadcasting this live on TV? It was on the 5thof  July that journalists posed the question: either you had to be a supporter of the LGBT community, or you were a slave to Putin. This is where the journalists crossed the red line and put the “queer community” on one side and the “slaves of Putin” on the other. How would you feel if they shouted in your ear all day long that you were either a slave or a gay and lesbian? How would you like that choice?

Unfortunately, most of the Western ambassadors had a hand in exacerbating the situation. It all started when they came to the screening of the film on the 2ndof Julyand  virtually all state resources were deployed to ensure their safety. This infuriated the LGBT community and terribly angered the vast majority of the population. This revealed how many peopl’ make up this community and how many make up the rest of Georgia. But apparently that wasn’t enough, for example, for the US ambassador. Kelly Degnan had the audacity (yes, indeed the audacity) to say: the people in the street are in the minority, the majority of the Georgian population is on the side of the LGBT community. Doesn’t that add fuel to the fire? Of course, it does,  but the American ambassador was not satisfied with that and spoke disparagingly about the leadership of IrakliGaribashvili: we had expected much more from the Prime Minister, he has not shown leadership qualities. In general, along with Degnan, Garibashvili and his government were attacked by a number of European ambassadors, and no one thought that the vast majority of the population agreed with the Prime Minister that the so-called Pride Parade should not have taken place.

The erection of a cross in front of parliament has also caused a stir. It turns out that the empty tents set up meaninglessly in front of the parliament did not bother anyone, while the erected cross is disturbing and annoying. And the fact that the participants of the so-called protest action turned the middle of Rustaveli Avenue into a toilet – is that okay and the cross must be removed immediately?  The West understands perfectly well that it is thanks to the cross and the church that they have been unable to subdue and enslave the nation for so long, and that is why they are fighting against the cross and the church in the first place.   As for the position of western diplomats, name a single country where the ambassador of another country takes so much on himself? Is there even one such country whose leader is criticized by ambassadors telling him how he should react to events inside the country? There is no such country except Georgia; and no politician has ever dared to say loud and clear to ambassadors: your statements are interference in the internal affairs of the country and you should stop it. However, what do you want, when apart from discussion of the document drafted by the same ambassadors, for months the main legislative body of the country has had no other business but to hold an extraordinary session this week to consider this document. The West no longer shows restraint, does not adhere to diplomatic protocol and does not seek to save face. If you ask us, the West was most irritated by the fact that the rally participants removed the EU flag before erecting the cross. Thus, the people, not politicians, responded to all ambassadors and declared that not only will Georgians stand under the yoke of slavery, but they no longer believe that Europe looks upon us as equals and wants to accept us into NATO or the European Union. In the previous issue we wrote that the 5th of July was a wordless referendum, and it was thanks to this referendum that the West learned more than it had understood before. It was a cause for concern, and in fact it was the West that raised the issue of government responsibility. They do not want a government that is on the side of the people, because it has become obvious that the people are not on the side of the West.  Moreover, the upsurge of resentment against the LGBT community in Georgia has also spread to the West, where a significant part of the population has applauded Georgians and sent a message to the EU bosses that the imposed liberalism is not liked in the West either.

We have a strong suspicion that after the 5thofJuly events,  the West has decided to change the government and will start taking effective steps in that direction. The forthcoming local elections are the best opportunity for this, because Charles Michel’s document clearly states that if the ruling team fails to pass the 43% threshold, early parliamentary elections will be held next spring. Hence, the West will do everything in its power to prevent the Georgian Dream from passing this threshold and to bring to power not a particular force, but a coalition government that it can crack, overthrow, call early elections and that will be more manageable at any given moment.

Until then, the West will try very hard to divide Georgia into supporters of the LGBT community and the rest, with the rest inevitably being traitors and “slaves of Putin” – if you do not applaud the debauchery, you will be declared a traitor to the country. Let’s recall an interesting story. Golda Meir was prime minister of Israel in the late 1960s and early 1970s. She asked Henry Kissinger, then US Secretary of State, who was on a visit to Israel: “Help Israel solve its problems, admit it, after all, you are a Jew”. On his return to America, Kissinger wrote to the Israeli prime minister: “First of all, I am an American, then a Secretary of State, and lastly, a Jew”. It did not take long for Meir to reply: “In Israel we read from right to left”. However, this did not solve the problem – neither Kissinger nor subsequent Secretaries of State and Presidents did anything about it. Instead, in 2017, Donald Trump officially recognized Jerusalem as Israel’s capital, and in general Trump was adamantly opposed to radical liberalism. He couldn’t understand why NATO needed billions of dollars, and… it wasn’t Trump who lost the US presidential election, it was the liberals who won. It is this victorious liberalism that is attacking the world today and threatening to swallow Georgia.