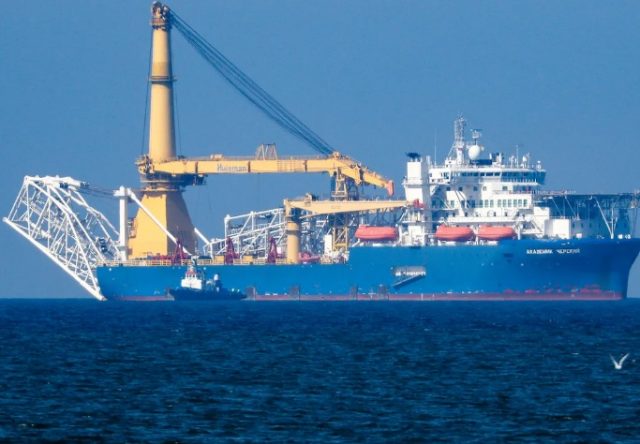 Pipelines are turning East, not West, an energy analyst tells Asia Times in the first installment of a two-part interview

Karin Kneissl is an energy analyst and author of 14 books and many articles on energy-related topics. She has taught international law, geopolitics and economics of energy since 1995 in a number of universities.

From 2017 to 2019, Kneissl served as Austrian minister for foreign affairs. In June 2021, she was elected as an independent director of the board of Rosneft but resigned on May 20, 2022.

Kneissl studied law and Arabic at the University of Vienna from 1983 to 1987. She was granted a scholarship at the Hebrew University of Jerusalem in 1988, where she accomplished her thesis research, and later on she studied in Amman.

Subsequently, she spent a year as a Fulbright fellow at the Center for Contemporary Arab Studies at Georgetown University in Washington, DC. In 1992 she graduated from the École Nationale d’Administration (ENA) in Paris.

Kneissl joined the Austrian Ministry for Foreign Affairs in 1990 and served in Paris and Madrid, as well as in the legal office.

She quit the diplomatic service in October 1998 and became a freelance analyst.

The following is the first installment of a two-part interview with Karin Kneissl. To read Part 2, click here.

Adriel Kasonta: According to Hungarian Prime Minister Viktor Orbán, the European Union not only shot itself in the foot when it came to sanctioning Russia, “but now it is clear that the European economy has shot itself in the lungs, and it is gasping for air.” Was this indeed a miscalculation by Brussels, and if so, what was behind it?

Karin Kneissl: For about 20 years, I’ve been lecturing on the topic of energy, with a focus on oil and gas. And I also did that for an audience, as I like to call decision shapers, not only the decision takers.

I like this very interesting distinction that the English language has between the decision shaper and the decision maker or taker because, in the end, politicians and commissioners depend on their staff to shape those decisions. And I had the chance to lecture them either academically or in the so-called strategic leadership courses you have.

So for about two decades, I did that on a regular level. And my audience wasn’t only young students and young colleagues in their early 20s, but they were also civil servants. And whether it was in national government cabinets or on a European level, I was really very often intrigued and irritated by the total absence of getting the larger picture of what energy politics should be about.

For 20 years, we’ve all been stuck in climate policy. We even gave up the notion of an energy minister. As a result, the economy minister also [wore] the hat of the energy minister, which is wrong, because energy as such on the national level is a highly fragmented topic.

The role is often divided among environmental, infrastructure and foreign affairs ministries. Often some competencies are with the prime minister’s office. The competence as such isn’t taken seriously. So you might think that you have people who should know better after the crises of 2006 and 2009 because there already were crises in terms of security in supply and affordability of energy. But no, they hadn’t learned; they hadn’t really studied the larger picture.

So at the beginning of the year, there was a kind of conviction among many decision takers that you can go out into the market, fly to the Gulf, fly somewhere else and sign a contract and import, whether it’s gas or oil, a few weeks later. But even if you were working in the textile industry and wanted to buy special linen or special cotton, these kinds of commodities aren’t available in large volumes on the market because the contracts are made at least for a year.

And it wasn’t an inside secret knowledge. It was common knowledge that commodities originating from the Russian Federation (coal, oil, gas, uranium or other rare [materials] that you also need for the renewable sector) couldn’t be easily replaced. It takes a while. In the case of gas, it takes around three to five years to replace it.

There is this title of the book I like, it’s 20 years old, and it’s called The Tyranny of Communication by Ignacio Ramonet. He was the former editor of Le Monde diplomatique, and he published his book in the late 1990s. And this title is very telling. It was long before social-media networks were developed. Still, as a newspaper person, he describes the decline of true information done by journalists and the rise of communication directed and distributed by companies or government offices.

And I remember as a young civil servant, a young diplomat working at the Austrian Ministry of Foreign Affairs, in the late 1980s that the most important person in the foreign minister’s cabinet was no longer chief of cabinet. It wasn’t his foreign-policy adviser, no. It was the press officer.

And that started in 1988, and I myself have been part of the government where everything was about communication, and I refrained from that. I had a different style that didn’t please the Austrian media and others because I didn’t work for the press. I wanted to solve problems.

I wasn’t interested in the polls. I was interested in how we could gain a solution on whatever level, whether it was a consular case to be solved or trying to improve the relationship between Turkey and Austria. I mean, this isn’t something you just distribute by the communication people, and we’re today in a world where the actual policy is replaced by communication.

Communication agencies have taken over the political field. So it’s all about making a show. Let me take a concrete example of the German minister of economy, who is also the minister of energy, Vice-Chancellor [Robert] Habeck, traveling in March to Qatar, for instance, and other Gulf countries. The media, his office, and his communication people presented it as if the thing had been closed and achieved.

But really? Did Mr Habeck come back with tons of cubic meters of LNG [liquefied natural gas] in his luggage? So there is this lack of nuance that there is a difference between traveling there and saying we’re interested in diversifying our import portfolio of Qatar’s LNG and actually getting the LNG.

And you don’t have to be a real expert in the field of energy to know that their existing clients in the East have fully booked their LNG, and we saw the gas crisis between April and November 2021 that was already there. It didn’t start on the February 24 this year.

Last year, LNG vessels from Qatar and North America and those in Rotterdam and other European ports went east, because the Asian clients simply paid a better price.

And this has to do with this deeply rooted Eurocentrism. We believe that we’re so great that nobody can do without us. We pay the better price, so we have to get the bigger volumes, which is nonsense. It has been nonsense for at least two decades. But it’s so unfortunate to observe that this ignorance and arrogance (it’s a dangerous combination) persists.

AK: You are known for saying that “the name of the game today is [affordable mobility and] affordable energy.” As we speak, the price of gas in Europe has surpassed US$2,000 per 1,000 cubic meters for the first time since the beginning of March. Do you believe that the Old Continent soon might face a sweeping wave of social unrest that will significantly impact its various political landscapes?

KK: Yes, la question sociale. You know, there were French philosophers already in the 18th century but then mainly in the 19th century when the social question became triggering momentum for all the revolutions we have seen throughout the latter. Whether it was 1830, 1845, La Commune in 1871, you name it, you have it.

Throughout the 19th century, it was always about social issues, and empires broke down because they had underestimated the social question. They simply hadn’t understood it.

Somebody who had understood it and who was a man of the 19th century was [Otto von] Bismarck. I mean, Bismarck was the one who introduced a very modern social-security system, not out of charity. It wasn’t empathy that drove him. It was the knowledge that if you don’t do something about it, you risk revolution. This is the awareness that some people are missing today.

And we have also seen, by the way, that the French were the first to act throughout last year to tackle tariffs somehow to put all kinds of leveling because they still feel the pressure they received from the Yellow Vest movement, which lasted for several months.

And I remember a debate I had on TV last autumn about that question. I was still a bit reluctant then because I thought that the rise of prices in tandem with inflation would still be manageable by the average citizen. But what has happened and what will still happen now, given the current mismanagement (it’s a home-made crisis, in particular by Germans and Austrians), I wouldn’t exclude anything.

And I’m not the first one to say that, you know. There have been other people who are much more under scrutiny that keep saying it. It’s logic.

What I fear the most as a human being is the following: I always say you can channel angry feelings via an election. There might be a new party, some kind of movement that absorbs this anger. In the case of Germany, this anger has already been absorbed by fringes on the right and the left. It’s there.

In Germany, we call them Wutbürger (“angry citizens”). And this Wutbürger movement started with the financial crisis of 2008-09. It was very much reflected in Germany by the enormous effort to save the euro (very much to the distress of the average German taxpayer), the north-south rift that you could already feel in 2010-11. And that was the moment when AfD [Alternative for Germany] on the right side and Die Linke on the left flank moved up.

But anger is one thing. Anger you can always channel. What you can no longer channel and tackle – and I say that as somebody who has always tried to understand human nature, because we’re not algorithms – is despair. And in my assessment, we’re already in times of despair. People are desperate.

This is the first installment of a two-part interview with Karin Kneissl. To read Part 2, click here.