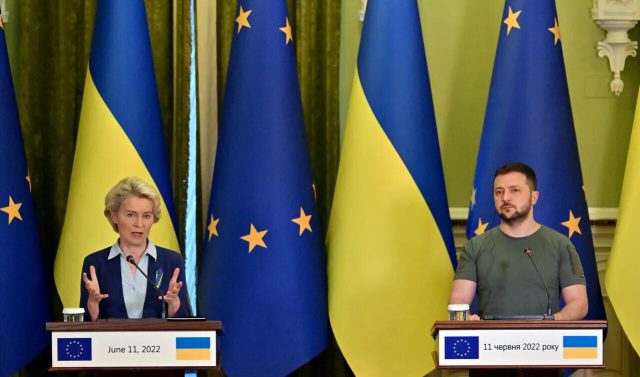 The EU will formally add Ukraine to its list of candidate countries this Friday. But if you look carefully beneath the pomp, you will see this is much less of a big deal than Brussels would have you believe.

For one thing, the gesture is symbolic. The list of official EU candidates is a bit like the waiting list for a smart London club. Being on it may be flattering, but it does not guarantee a quick decision; nor does it rule out the possibility of one or more black balls if and when your name eventually comes up.

Albania, North Macedonia, Montenegro, Serbia and Turkey are all current candidates on the list. All are respectable nations, but don’t hold your breath as regards an early admission for any of them. The formal inscription of Ukraine on this list looks more like a public relations exercise by Brussels, which is desperate to show its support for a good cause, than a serious commitment to anything much further.

The lack of enthusiasm from western EU members may be disconcerting, but is actually understandable

Secondly, if you think all this demonstrates some kind of EU solidarity in support of Ukraine, think again: it doesn’t. European unity here is almost entirely superficial, limited in practice to uncontroversial matters like calling out Russian atrocities, piously denouncing Russia as the antithesis of democratic European values, and intoning ‘slava Ukraini’ from a safe distance. Whatever the view in places like Poland or Lithuania, a European think-tank last week found large majorities in many European countries, notably Germany and Italy but also France and Sweden, favouring ‘peace’ over ‘justice’. Put bluntly, this means standing aside and leaving Ukraine to negotiate the best terms possible with Vladimir Putin.

There is no more unity on Ukraine’s eventual EU admission. Bulgaria, the Czech Republic, Slovakia, Poland, the Baltic states and Slovenia openly advocated not only admitting Ukraine but fast-tracking the process: so, too, has Hungary. That is anathema to Brussels and will not happen.

On the other side of the table, although Portugal, the Netherlands, and Denmark have agreed to Ukraine’s candidature, they are reportedly lukewarm about actually admitting the state at all, at least any time soon. Finland has stressed the need for major changes before membership can even be considered; and according to Belgian premier Alexander de Croo, membership ‘won’t be for tomorrow. It will take a long time.’ Some unity.

Since admission of new members requires unanimity, no wonder president of the European Commission Ursula von der Leyen retreated into saying that any further decision must be ‘merits-based’ and go ‘by the book’ after initially fulsomely welcoming Ukraine to the waiting-list.

The lack of enthusiasm from western EU members may be disconcerting, but is actually understandable. These countries largely bankroll the EU operation. Were Ukraine to join, it is a racing certainty that for many years it would cost the EU, and hence them, big money. It’s not only the war, which will leave Ukraine severely scarred even if and when it wins it. Before that even started, Poland and Hungary, both with a per capita GDP of something over $15,000 (£12,000), were major beneficiaries of EU regional funds. The corresponding figure for Ukraine was $3,700 (£3,000). You can work out the cost for yourself.

The older, western EU members, to whom the supremacy of Brussels and EU law is second nature, are conscious that some of the keenest support for Ukrainian membership comes from Poland and Hungary, notoriously the most vociferous in promoting their own national interests and resisting all attempts by the EU to interfere in what they see as their internal affairs (witness most recently Hungary’s veto over the EU minimum tax plans, and Poland’s continuing resistance to what it sees a unjustified interference in its judicial system). The western members think, almost certainly rightly, that Ukraine would tend to side with such attitudes. Once the fog of war has subsided, it is hard to see Kyiv, having resisted the attempt of one bully to destroy its statehood, agreeing meekly to accept the dictat of Brussels and a largely pro-centralist European court.

This worry will also be shared in Brussels. Only last week, the central EU bodies produced their response to the Conference on the Future of Europe, an exercise in consultation that had been going on for over a year. Their view is clear: they want to give more, not less, power to Brussels. They suggest subjecting almost all decisions to some form of qualified majority voting and thus further whittling away the power of individual member states to hold up decisions.

Already engaged in delicate attempts to bring Budapest and Warsaw to heel, and with an agenda to cut down the pretensions of member states in the future, the last thing they want is the addition of another potentially maverick country with over 40 million of its own bloody-minded citizens likely to oppose any such measure, and if anything to add to the centrifugal forces within the EU.

When Friday comes, Kyiv will, of course, officially celebrate the compliment being paid to it by the EU. But Ukraine’s president Volodymyr Zelensky is no fool. One suspects he will realise that, despite the kind words coming from the EU this week, this is all he is likely to get. As for eventual EU membership, it’s a case of wait and see, possibly for a very long time. It’s something he can and should put firmly in the pending tray, while he concentrates on more immediate needs, for which the EU is frankly an irrelevance.