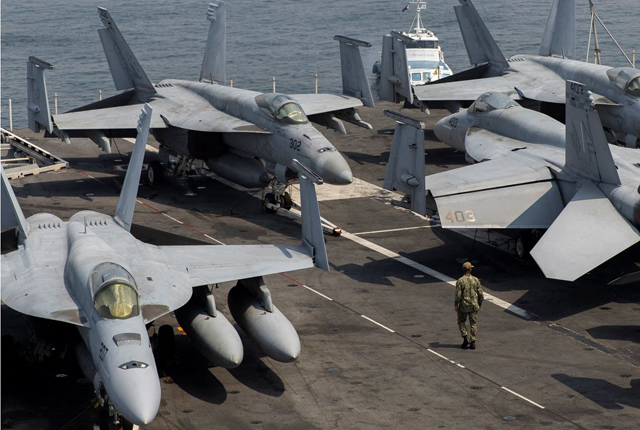 Russia’s invasion of Ukraine revealed the fading power of America’s military deterrent, a fact that too few of our leaders seem willing to admit in public. So it is encouraging to hear a senior flag officer acknowledge the danger in a way that we hope is the start of a campaign to educate the American public.

“This Ukraine crisis that we’re in right now, this is just the warmup,” Navy Admiral Charles Richard, commander of U.S. Strategic Command, said this week at a conference. “The big one is coming. And it isn’t going to be very long before we’re going to get tested in ways that we haven’t been tested” for “a long time.”

How bad is it? Well, the admiral said, “As I assess our level of deterrence against China, the ship is slowly sinking. It is sinking slowly, but it is sinking, as fundamentally they are putting capability in the field faster than we are.” Sinking slowly is hardly a consolation. As “those curves keep going,” it won’t matter “how good our commanders are, or how good our horses are—we’re not going to have enough of them. And that is a very near-term problem.”

Note that modifier “near-term.” This is a more urgent vulnerability than most of the political class cares to recognize.

Adm. Richard noted that America retains an advantage in submarines—“maybe the only true asymmetric advantage we still have”—but even that may erode unless America picks up the pace “getting our maintenance problems fixed, getting new construction going.” Building three Virginia-class fast-attack submarines a year would be a good place to start.

The news last year that China tested a hypersonic missile that flew around the world and landed at home should have raised more alarms than it did. It means China can put any U.S. city or facility at risk and perhaps without being detected. The fact that the test took the U.S. by surprise and that it surpassed America’s hypersonic capabilities makes it worse. How we lost the hypersonic race to China and Russia deserves hearings in Congress.

“We used to know how to move fast, and we have lost the art of that,” the admiral added. The military talks “about how we are going to mitigate our assumed eventual failure” to field new ballistic submarines, bombers or long-range weapons, instead of flipping the question to ask: “What’s it going to take? Is it money? Is it people? Do you need authorities?” That’s “how we got to the Moon by 1969.”

Educating the public about U.S. military weaknesses runs the risk of encouraging adversaries to exploit them. But the greater risk today is slouching ahead in blind complacency until China invades Taiwan or takes some other action that damages U.S. interests or allies because Bejiing thinks the U.S. can do nothing about it.

By The Editorial Board, wsj.com