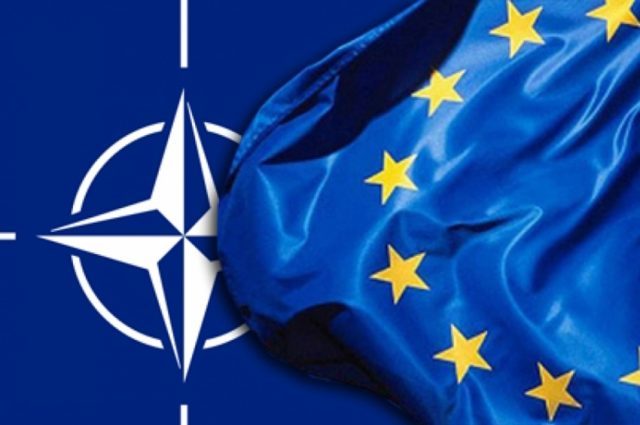 Russian President Vladimir Putin said an interesting thing last week: “Everyone wants to bite us somewhere or bite something of us, but they should know that we will break everyone’s teeth so that they cannot bite.”

Vladimir Putin’s statement was followed by a “stern tone” from Georgian Foreign Minister Davit Zalkaliani: “NATO directly calls on Russia to withdraw its troops from Georgian territory immediately!” Zalkaliani was supported by the Ambassador of Georgia to the United States – Davit Bakradze: “Russia continues its policy of domination and intimidation, but we can not be intimidated.” These statements were soon followed by the statement of MEP Marina Kaliurand that Georgia will not receive consent to join the EU in 2024. What is urgently to be done by our country? What is better for us – to follow the chimera of the EU and NATO or to face the reality? However, Russia leaves us a trade issue with the non-connection of Abkhazia and Ossetia. Well-known political scientists talk about these and other important issues.

“The Russian president is pursuing a real policy, so it is better to resolve relations with him, but no one has a ready recipe for starting this process”

– Georgia will not be accepted in NATO and I am constantly talking about it. Our authorities have always had these expectations but in vain. We have been knocking on NATO door since Shevardnadze’s time, we are not just knocking, we are moving in from the window but nothing will come of it.

Foreign Minister Zalkaliani is well aware that all talks about NATO are false. He is told everything clearly at meetings abroad. Simply, he speaks just the way they he is told to.

Georgia is not ready to join NATO, NATO is not just a military bloc, it is a political union that has great requirements, and Georgia cannot and will not be able to meet these requirements. Today it is the 21st century, not 1952, when an undemocratic Turkey joined NATO, which happened because of the Korean War …

– If our country is in such a hopeless situation towards NATO, is it not better to change the foreign course and be actively involved in the processes ongoing in our region, I mean the “unity of six countries”, the author of the idea of ​​which is Turkish Prime Minister Erdogan?

– The idea of the “unity of the six countries” will not work, because, although Russia seems to be in favor of it, it will not agree. If Erdogan’s initiative only covers economic development issues, something might come out of it, but he has big and far-reaching plans, he is a nationalist, so the Russian president will not allow this plan to be implemented. The Russian president is pursuing a real policy, so it is better to have a relationship with him, but no one has a ready recipe for starting this process. Besides, what big policy are we talking about, when most of the population of our country is starving, the best young people are leaving the country …  I advise the government to look after the people, not to distance itself from the society, not to give chance to NodarMeladze to speak, otherwise, not only dreaming of NATO, but also being in Georgia may become questionable.

“Our ambassador to the United States, who says he is not afraid of the Russian president and Russia, is right, because he is far from here – he lives in Washington with his family”

– Our ambassador to the United States, who says that he is not afraid of the Russian president and Russia, is right, because he is far from here – he lives in Washington with his family. As for Foreign Minister Zalkaliani, he should be afraid, even though he has a US visa and can easily escape, as our “patriots” always did, who took Georgia’s wealth from Turkey and which wealth was returned to Georgia by Stalin and Beria through a decent man, EkvtimeTakaishvili. …

I want to talk to readers about Belarus. Alexander Lukashenko, President of Belarus, has “hijacked” the airplane, which led to the suspension of air traffic in the direction of Belarus. In addition, it was announced that the country would not be able to receive the 3 billion investment, which was allegedly already ready, and if Batkahad not hijacked the plane, which they could not prove, the amount would have been in Belarus. This is very primitive, funny and childish propaganda from the overburdened and insane bureaucracy of the European Union. Along with the European Union, NATO is also “making noise” about this incident …

Lukashenko, meanwhile, arrived in Sochi to meet with the Russian president, from whom he has already taken $ 500 million and will now receive another $ 500 million by the end of June. That’s actually real money. All agreements between Russia and Belarus are in force. So Russia gives real money, it also gives real help in terms of security. After the meeting in Sochi, the Russian president will also help “Belavia”, which will have additional flights to Russia, as people in Belarus mainly go to Russia. It turns out that Putin is helping “Belavia” at the expense of Russian airlines.

Now let the reader judge whether the non-existent three billion was better for Belarus or the existing, visible billion, even in preferential terms, almost a gift of money ?!

I said all this to enable a normal person make a conclusion – which is better: cooperation with Russia, its generosity or ostensible friendship with the swindler America-Europe?

Georgia’s membership in NATO is a myth and we have known this for a long time. Every sane person no longer believes in the expectations and conversations of our authorities with NATO membership.

– Despite the “recognition”, Russia does not integrate Abkhazia and South Ossetia into the Russian Federation, but it can do it. Is it time for Georgia to talk about this issue with Russia?

– Why on earth it should want to integrate these territories ?! Russia does not consider Abkhazia and South Ossetia to be its territories, the Russians know that these territories are the heart of Georgia. Saakashvili forced Russia to recognize these territories as independent republics. This was also facilitated by NATO policy. Were it not for NATO-oriented policy in our country, Russia would not have done it.

-It is interesting to think what is better for Georgia – NATO and the European Union or relations with Russia?

-I gave you a complete answer to this question with the example of Belarus, how Belarus did not care for American-European sanctions and how Russia helped it.

“Western countries are aggressive towards Russia and Georgia is among them, we have no other way, we have signed the Association Agreement …”

– The Georgian authorities are considered part of the Western world, at least they consider themselves as such and therefore they have an obligation to pursue a policy that will be agreed with the West. Consequently, because the Western countries are aggressive towards Russia and Georgia is among them, we have no other way, we have signed the Association Agreement.

Unfortunately, MEP Marina Kaliurand spoke not only about us, but also about those who are already integrated into the EU. He said that even the members have not made decisions about what to do …

Although Georgia is a small country, it is beneficial for the Russian President Vladimir Putin to establish relations with us because Georgia is a key country in the Caucasus. If Russia wants, and it actually wants, to maintain its influence in the Caucasus, Georgia is worth it. We have a strategic location and that is why both the West and the United States are showing so much interest in Georgia. The Western world does not want to lose our country as a mainstay in the Caucasus, however, Russia has this ambition due to our location, which is something we should consider.

Georgia is a small, buffer state, we, unfortunately, are not subjects, we are objects of international politics, so our fate depends on the policies of big countries.

The presidents of the United States and Russia will meet in Geneva on June 16. This meeting may not suddenly decide the fate of a country like ours, but it is a fact that the redistribution of influence will take place and a new order will be established, because the meeting was initiated by the United States itself.

Georgia is not a sovereign country, it is a signatory to the Association Agreement and depends on the West, because all aid comes from there, so it is difficult for us to make a decision on this or that very important issue. We have chosen a course of confrontation with Russia that Saakashvili has strengthened and nothing can change it now, even though it is vital for Georgia to resolve relations with Russia. Anyone in favor of a constructive dialogue with Russia is considered a traitor, but turning an “enemy” into a benefactor is considered the highest level in diplomacy.

If we do not talk to Russia, it will pursue the worst policy in Georgia, so it is interesting, what gives our ambassador to America, Bakradze, a reason not to be afraid of Russia ?! Those who are not “afraid” of Russia will run away from here and we have classic examples of this, but what can we do who do not want to go?!