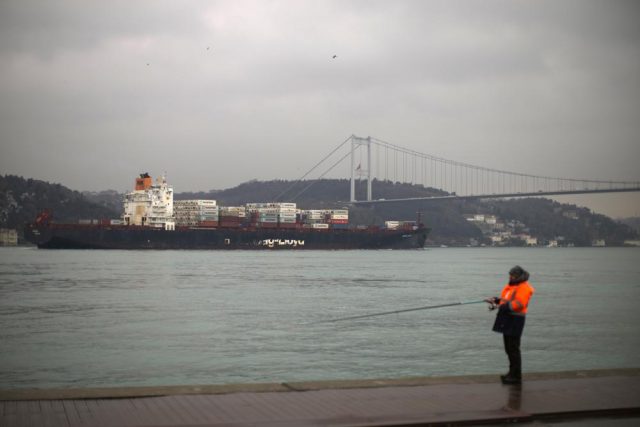 Since Russia’s invasion of Ukraine, hundreds of tankers and bulk carriers have been diverted away from the Black Sea, while dozens more have been stranded at ports and at sea unable to unload their valuable cargoes. Russia is a leading exporter of grains and a major supplier of crude oil, metals, wood and plastics — all used worldwide in a range of products and by a multitude of industries from steelmakers to car manufacturers.

Only a small handful of Russia’s 2,000 cargo and tanker ships have been sanctioned by Western powers, but freezing the assets of the country’s biggest banks means the business of importing and exporting from Russia will take a major hit. Intensifying the squeeze are companies from Apple and Nike to major shippers like Maersk abandoning the country, whose extensive trade ties with the West have been all but severed.

“This is an earthquake like we’ve never seen before,” said Ami Daniel, a co-founder of Windward, a maritime intelligence firm that advises governments. He added, “Companies are going well beyond what’s legally required and taking actions based on their own values before their customers even demand it.”

One potential escape valve for Russian exports is China, whose fast-growing economy is thirsty for natural resources. But China, perhaps the biggest beneficiary of globalization, so far has shown little appetite to fully back President Vladimir Putin despite abstaining from a U.N. vote condemning the land grab.

The strains are already being felt at Interunity Group, a family-run Greek shipping company whose 60 oil tankers and bulk carriers are operated by dozens of Russian and Ukrainian sea captains and officers.

After the invasion, the Russian part of Interunity’s workforce wondered how they’d get home after the European Union imposed a flight ban on their country. The Ukrainian half didn’t know if they’d have a home to return to.

One Ukrainian senior officer stranded on a tanker in the Gulf of Mexico was so distraught that he demanded to be allowed to disembark months before his contract ended, said George Mangos, one of Interunity’s directors.

“He told me he wanted to get off at the next port so he could fight for his homeland,” said Mangos, who expressed admiration for his patriotism. “Operating a highly sophisticated tanker with a dangerous cargo is stressful even under normal situations, so all you can do is ask people to focus on the job and leave the politics aside. It’s hard, but these are very stoic people, and I’ve been impressed by their dedication.”

So far, the war’s impact on global trade has been most severe in the Black Sea, where Russian and Ukrainian ports are major hubs for wheat and corn. Traffic has ground to a halt, effectively shutting down the world’s second-largest grain exporting region.

Unlike oil production, which can be ramped up quickly elsewhere, boosting grain supplies takes time and the sheer volume that could be diverted as a result of war and sanctions — Ukraine accounts for 16% of global corn exports and together with Russia 30% of wheat exports — means poorer countries that depend on imports could face major supply shocks.

“The question is not whether there will be serious economic effects and critical food shortages in already fragile countries, the question is what Russia will do with that and how the West will react,” said Rohini Ralby, a director at I.R. Consilium, a U.S.-based maritime consulting firm.

Among the countries most at risk are Egypt, India and Turkey, all of which rely heavily on Russia for everything from staples used to make flatbread to natural gas and tourism.

Around 78% of Turkey’s wheat imports come from Russia and another 9% from Ukraine. Much of those supplies are used in Turkey’s food industry, a major exporter itself. India imports about 80% of its oil, much of it from Russia, and metals from Russia to supply the world’s fifth-largest automobile industry.

In the U.S., the biggest impact will be felt at the gas pump, where higher prices are expected to add to inflation already running at the fastest rate in four decades. Russia was the third-largest source of oil products sold in the U.S. last year — behind only Mexico and Canada — and responsible for 8% of all imports. Russia is also the United States’ second-largest supplier of platinum, a metal used to build exhausts for automobiles.

But overall, Russia was only the 20th-largest supplier of goods for the United States, according to the U.S. trade data.

While the Biden administration has held back from a blanket Russian trade embargo or targeting Russia’s energy sector, to limit the pain on the West, that’s done little to calm markets.

Wheat prices have jumped more than 55% since the week before the invasion. Oil prices, which had been steadily rising since the start of the year due to demand from a recovering global economy, soared past $110 a barrel for the first time since 2013.

And the rates charged to charter giant oil tankers worldwide have jumped as much as 400% as oil traders scramble to secure capacity that become suddenly scarce. Windward estimates there are 87 million barrels of Russian oil worth $10 billion that are floating in the ocean, struggling to find buyers.

It’s not yet clear how economic warfare on Russia will shake out and what other unintended consequences may be in store. While overcompliance with sanctions is a frequent problem, never in the past have restrictions been imposed so swiftly and coordinated so closely among U.S. allies to target a global power.

The situation alarms Tinglong Dai, a business professor who studies supply chains at Johns Hopkins University. Since the end of the Cold War, the bedrock of global trade has been a separation of geopolitics and business and an assumption that rational decision-making will always prevail, Dai said.

“Both of those have been destroyed by Russia,” says Dai, adding that a new sort of “Iron Curtain” could soon emerge, with Russia and its allies on one side and the West on the other.

“It’s no longer possible to avoid picking sides, and the consequences of this reconfiguration of global supply chains in terms of more poverty, loss of innovation and job opportunities is something we will all have to pay for,” he said.