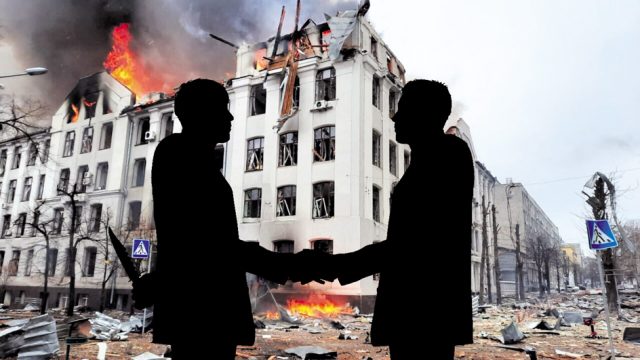 March 24th marked 30 years of diplomatic relations between Georgia and the US. To mark the occasion one of the media outlets recorded an extensive interview with US Ambassador to Georgia Kelly Degnan. The US ambassador talked about many burning issues for her. It turns out that one of those issues is the activation of “pro-Russian” forces in Georgia: “These people support violence, they have a strong pro-Russian message – they want Russian forces, Russian bases in Georgia. They are potentially creating a situation to justify the Russian invasion. These people do not serve the interests of Georgia. They are the tool of Russian disinformation and Georgia has been watching this for years.

I think any support they might get is very disturbing and especially disturbing is the violence they are displaying against the freedom of expression of peaceful people. It is against the principles of Georgia and the Georgian Constitution. Such hostile broadcasts have been shut down in other countries because of their propaganda of violence and hatred. I think the answer to that may be that we have to help the population understand what they are listening to, understand what the danger is. The US is doing a lot in terms of media literacy so that both young people and adults can better recognize fake news, better see false narratives that aim to mislead and divide society. The Georgian people have repeatedly stated what they want, and that is a Euro-Atlantic future, a greater Western integration into the family of European countries. History of Georgia shows that treaties  signed with Russia are rarely fulfilled. There were many cases when Russia broke its promises to Georgia. The most recent one was in 2008 – we are still waiting for Russia to fulfill its obligations under the ceasefire agreement of 2008 including the withdrawal of its troops from Abkhazia and Tskhinvali. So I think the Georgians will be very careful in making any decision.”

What does the US ambassador want, is Kelly Degnan an enemy or a well-wisher of Georgia – on these and other interesting topics political analyst Revaz Kilasonia talks to us.

Statements and attempts by US Ambassador Kelly Degnan and other politicians to open the second front in Georgia are statements and attempts by our country’s enemies. We already know that war is not a hypothetical danger – war will either start or it will not. This is a direct and existential danger. We may get a situation like the one in Ukraine and it will inevitably end in tragedy for our country – we will lose our statehood.

Every politician, who is trying to incite Georgia and draw Georgia into war, whether it is Kelly Degnan, destructive forces in the country, Ukrainian authorities or others – they are enemies. I want to address those representatives of the Ukrainian government that are arrogant towards us but they have nothing to say to other countries that also have not imposed sanctions against Russia. They seem to think that Georgia is a weak country or a weak authority and they think they can influence us and draw us into the conflict. Whoever wants this, whoever wants to involve us in a military conflict, is an enemy of our country!

Despite the fact that our government, especially the Prime Minister has the right position, the actions and statements of internal or external enemies do not stop … Garibashvili and the “Dream” government failed to prevent Georgia from becoming an easy prey for everyone …

The position of the government in this situation is correct, rational and pragmatic. It’s noticeable that the government, and Garibashvili in particular, has not fully submitted to the influence of the West, and I noticed it on July 5 when he said: “I know there are military parades, not gay parades”. That thought it was brave of him. Why he failed to prevent the kind of actions that are taking place here is a completely different topic.

Kelly Degnan is not just a person, she is expressing views of certain Western powers in her speech. Being under influence of the West for years has made Georgia very much dependent on their opinion and decisions, they run our country. I mean western institutions, nongovernmental organizations. So it is impossible to take strong measures against them. We have been in the clutches of the West for years, and if the government makes drastic changes now, frankly, it will be unacceptable, it should happen gradually.

My attitude towards the government is not loyal, but their actions in this case are correct. The main thing is not to raise the political temperature in Georgia, not to make drastic steps, not to give in to provocations, not to give in to destructive forces, so that this rather tense situation does not develop into more unrest and military actions.

Yes, they mention them with fear because the Western powers fear a different opinion. The so-called influential Western powers call “pro-Russian” anyone who disagrees with their views, disagrees with their policies. If one considers the hell these “influential” powers have kept this country in for 30 years, it becomes clear why they are afraid of rational and so-called “pro-Russian” forces. They cannot stand the strengthening of other forces, they only want supporters, not another opinion, so they have become aggressive, often even resorting to violence to suppress the other opinion. I do not know who is “pro-Russian” for so called “pro-westerners”, but I know that they hate people and groups with other views, they hate everyone who doesn’t like implementation of western geostrategic interests in Georgia.

A very interesting process has started in the sense that they themselves have marginalized the label “pro-Russian” and the majority of the population treats “pro-Russian” with indifference, which is a good thing. This gets on the nerves of the Western powers.

Western powers are well aware that America is losing credibility in the region. We remember what happened in Afghanistan last August – American soldiers and the whole American infrastructure were ahead of their own planes leaving that country. The American influence is waning, and they are taking their last chance, and that chance is Georgia, because the US has no more influence in Turkey and Azerbaijan, and their influence is not working in former Asia anymore. We remember the news from Kazakhstan. Georgia has been and will remain a weak link and a zone of US interests, but the main thing here is that they are pushing us to do bad things, to act militarily, to destroy. If we follow them and start acting on their advice and Russia perceives it as a threat, I don’t even want to imagine what will happen here.

The collective West is speaking in the person of Kelly Degnan, I mentioned this at the very beginning.  They are trying to create more hot spots around Russia to create an aggressor out of Russia. There is another question – are their appeals in the interest of Georgians? – No, it does not help us – neither the people, nor the state. Our involvement in the conflict is destructive, Kelly Degnan and other politicians pushing us towards war are enemies and ill-wishers of this country,

I can’t name them, because then I would become like those fringe politicians who shout: Putin is an enemy of Georgia! Russia is an occupier! I think I have discussed  exactly what is going on and where our so called Western partners are taking our country to. That’s why I do not consider it necessary to call them by their names. Enemy is a word taken out of context. Someone is calling me an enemy and a Russified Georgian, which is not true. The truth is that the enemies are those who are trying to draw Georgia into the conflict!