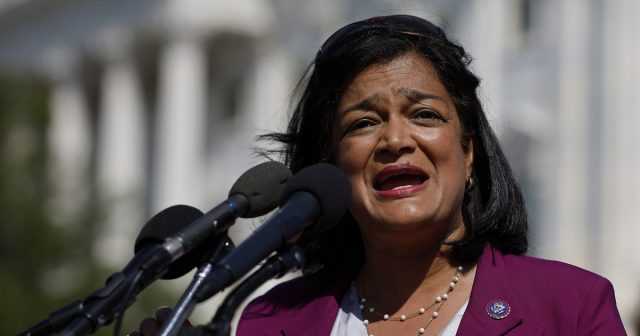 The Democratic Party should be leading the charge for peace and a negotiated settlement to end the war. This is a start.

In a dramatic break with the Biden administration on the eve of the midterm elections, 30 House Democrats have sent a letter to President Joe Biden urging him to engage in direct talks with Russian President Vladmir Putin to end the war in Ukraine. In addition to bilateral talks, signatories to the letter, initiated by Progressive Caucus Chair Congresswoman Pramila Jayapal, urge the White House to support a mutual ceasefire and diplomatic efforts to avoid a protracted war that threatens more human suffering and spiraling global inflation, as well as nuclear war through intention or miscalculation.

Despite President Biden’s recent acknowledgement that we have never been closer to nuclear Armageddon since the 1962 Cuban Missile Crisis, Biden has not met with Putin since Russia invaded Ukraine on February 24, and he recently told the press he will refuse to meet with Putin next month when the two attend the G-20 Summit in Bali.

Expressing praise for Biden’s “commitment to Ukraine’s legitimate struggle against Russia’s war of aggression,” the letter dodges the question of whether the United States should continue to arm Ukraine with medium-range rockets, ammunition, drones, tanks and other weapons.

The letter reads “…. we urge you to pair the military and economic support the United States has provided to Ukraine with a proactive diplomatic push, redoubling efforts to seek a realistic framework for a ceasefire.” The key words here are “has provided” as opposed to “will provide,” leaving open the possibility that some Democrats will oppose future weapons transfers.

Back in May, not a single Democrat voted against the eye-popping $40 billion Ukraine package, much of it earmarked for weapons, intelligence, and combat training. On September 30, Congress passed the “Ukraine Supplemental Appropriations Act,” giving another $12.35 billion of our tax dollars for training, equipment, weapons, and direct financial aid for Ukraine–without so much as a whisper of dissent from Democrats.

So far, the only congressional opposition to arming Ukraine has come from far right Republicans. Despite Republican Senate Minority Leader Mitch McConnell’s enthusiastic support for the $40 billion package, 57 House Republicans and 11 GOP Senators voted against it. Some objected because they thought the U.S. military should focus on China or on the U.S.-Mexico border, but others cited concerns over the lack of oversight, unmet domestic needs and runaway spending.

One of the most prominent critics of Biden’s handling of the war is former President Donald Trump. Never mind that Trump reversed his predecessor President Barack Obama’s decision to refrain from sending offensive weapons to Ukraine and failed to negotiate the continuation of two vital arms control treaties with Russia—the Open Skies Treaty and the Intermediate Nuclear-Range Forces Treaty (INF). Trump is now using his public appearances and the media, including his social media platform Truth Social, to call for peace talks.

“Be strategic, be smart (brilliant!), get a negotiated deal done NOW,” he wrote online. At an Arizona rally, Trump boomed, “With potentially hundreds of thousands of people dying, we must demand the immediate negotiation of the peaceful end to the war in Ukraine, or we will end up in World War III and there will be nothing left of our planet.”

Trump has also insisted that if he were president, the war in Ukraine would not have happened because unlike Biden, he would have met with Putin: “I’d talk to him; I’d meet with him. There is no communication between him and Biden.” Trump volunteered himself as a possible negotiator. “I will head up group???” he wrote on TruthSocial.

Also calling for negotiations is far right Fox News anchor Tucker Carlson. Carlson says that the nuclear threat “is enough for any responsible person to say, ‘now we stop,’ especially if that person is the leader of the United States, the country which is funding this war and that could end this war tonight by calling Ukraine to the table.”

Tesla’s Elon Musk, now backing Republicans, told his 107 million Twitter followers that “the probability of nuclear war is rising rapidly” and suggested a very rational peace deal in which Russia keeps Crimea, Ukraine affirms neutrality from NATO and the UN oversees referendums in the Donbas.

Another newly minted Republican now condemning U.S. support for the war is former 2020 Presidential candidate Tulsi Gabbard, once a supporter of Democratic Socialist Bernie Sanders and a vice chair of the Democratic National Committee. Gabbard announced that she is quitting the party in power, saying: “I can no longer remain in today’s Democratic Party that is now under complete control of an elitist cabal of warmongers.”

Political observers might surmise that Gabbard is positioning herself for another presidential run, but whether or not that’s the case, her sharp criticism of Democrats is finding an audience among millions of Fox viewers.

If Republicans take over the House in November, House GOP leader Kevin McCarthy warns they may turn off the money spigot for Ukraine. “I think people are gonna be sitting in a recession and they’re not going to write a blank check to Ukraine.”

McCarthy’s comment caused such panic on Capitol Hill that according to NBC News, leaders in both parties are considering passing legislation in the lame duck session to send Ukraine $50 billion more in weapons, military training and economic aid, bringing the total U.S. tab since the Russian invasion to over $100 billion, which exceeds the budget of the entire U.S. State Department.

It will be telling to see if any Democrats, including those who signed the Jayapal letter, will vote against more weapons. As inflation worsens and voters seek leaders to address their economic needs instead of endless war in Ukraine, Democrats, especially those who call themselves progressives, should not cede the peace position to Donald Trump and Tea Party Republicans bent on repealing voting rights, deregulating environmental protections, and banning abortion.

The future of their Democratic Party is at stake—and the human race, too.

Medea Benjamin is co-founder of Global Exchange and CODEPINK: Women for Peace. She is the co-author, with Nicolas J.S. Davies, of War in Ukraine: Making Sense of a Senseless Conflict, available from OR Books in November 2022. Other books include, “Inside Iran: The Real History and Politics of the Islamic Republic of Iran” (2018); “Kingdom of the Unjust: Behind the U.S.-Saudi Connection” (2016); “Drone Warfare: Killing by Remote Control” (2013); “Don’t Be Afraid Gringo: A Honduran Woman Speaks from the Heart” (1989), and (with Jodie Evans) “Stop the Next War Now” (2005).

Marcy Winograd of Progressive Democrats of America served as a 2020 DNC Delegate for Bernie Sanders and co-founded the Progressive Caucus of the California Democratic Party. Coordinator of CODEPINKCONGRESS, Marcy spearheads Capitol Hill calling parties to mobilize co-sponsors and votes for peace and foreign policy legislation.