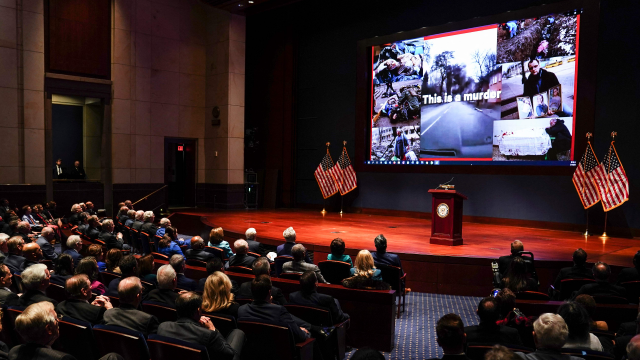 When President Volodymyr Zelensky, speaking to U.S. lawmakers on Wednesday, aired a video documenting the human toll of Russia’s assault on Ukraine, the images were so graphic they prompted an apology from a cable news anchor for having failed to warn viewers about what they were going to see.

The video, which showed corpses being dumped in mass graves and bandaged children staring out from hospital beds, brought home the toll of the conflict in a stark, visceral way, leveraging support from Congress and intensifying pressure on the Biden administration as Zelensky appeals for additional military aid in his country’s struggle.

The Ukrainian leader’s plea to Congress — in which he appeared unshaven and grave-faced, in his trademark military tee — is the latest example of how the one-time TV star has overseen an extraordinarily effective communications campaign that has proven crucial in marshaling global support for Ukraine’s fight against Russia.

By playing up Russian brutality and military stumbles, deftly using social media, and appealing to foreign leaders’ emotions while challenging their policies, Zelensky has steered an information offensive that has yielded greater Western arms donations and wider backing for unprecedented economic sanctions against Russia.

Sean McFate, author of “The New Rules of War” and a senior fellow at the Atlantic Council, said the Ukrainian communications strategy — or stratcom, in military parlance — highlighted a shift taking place in modern conflicts, from a focus on munitions dropped to one centered in large part on messaging, media and persuasion.

“Russia may be winning the shooting war,” he said. “But Ukraine is winning the information war. That is the key to getting allies’ support and sympathy.”

The effort also reveals how Ukraine now rivals — and, in the West, has far outpaced — Russia in a field in which Moscow has been seen as a global leader. Unlike in the past, when Russia used information and disinformation operations to sway global events including the 2016 U.S. presidential election, experts say Moscow’s effort is directed internally as President Vladimir Putin scrambles to shore up domestic support.

The standing ovation Zelensky received from American lawmakers on Wednesday — like those he has received elsewhere — caps the 44-year-old’s transformation from comic actor to wartime leader.

After his 2019 election, Zelensky — who rose to fame as a bumbling but straight-talking fictional president on a popular Ukrainian TV show — installed associates from his TV production company into the country’s top jobs. Policymakers from Ukraine’s allies warned privately that it was a bad idea, but the in-house media expertise appears to have paid off.

Long before the Russian invasion, Zelensky embraced a communications strategy unusual in its disregard for standard diplomatic parlance, often generating discomfort among Ukraine’s backers in the West, as he did when he repeatedly challenged the Biden administration’s policy of not sanctioning the Nord Stream 2 pipeline, which was built to carry natural gas from Russia to Germany.

“He had the guts to defy Western leaders who were only giving him half a loaf and saying, ‘Look, given the threat I’m under, I should get a full loaf,’ ” said John Herbst, who served as ambassador to Ukraine from 2003 to 2006 and now heads the Atlantic Council’s Eurasia Center.

Now, those tactics have been elevated to a larger stage. In plain-spoken late-night speeches from his office, in sweatshirt-clad selfie videos filmed outside the presidential administration building in Kyiv, and in more formal videoconferences to leaders around the world, Zelensky has galvanized a strong global response to the invasion. He has 5.4 million Twitter followers.

He has tailored his appeals to different audiences, echoing the wartime words of Winston Churchill in a speech to the British Parliament; referencing Canadian cities in an address to lawmakers in Ottawa; and citing the Sept. 11, 2001, attacks and the Rev. Martin Luther King Jr.’s “I Have a Dream” speech in Wednesday’s remarks to Congress.

“Zelensky has the circumstances where his unique abilities as a communicator can really flower,” Herbst said.

People who were in the room when Zelensky addressed a late-night summit of European Union leaders last month, a day after Russia began its invasion, credited his powerful intervention as inspiring them to impose significantly stronger sanctions than were initially considered.

His declaration that Ukrainian mothers were watching their children die on behalf of European values left some leaders in tears, the officials said. After Zelensky’s remarks, the leaders approved teaming up with the United States to freeze the Kremlin’s foreign reserves, a sledgehammer to the Russian economy.

While his regular video addresses are aimed at bolstering Ukrainian morale as people endure punishing Russian attacks, they are also directed at ordinary Russians he hopes might see his remarks on some of the few modes left to communicate to them, such as the Telegram messaging app. He speaks in passionate and angry Russian, telling Russian soldiers that if they surrender, they’ll be treated well but that if they keep up the fight, they’ll be tried as war criminals. He switches fluidly between Ukrainian and Russian. Speaking to Congress, he turned from Ukrainian to English to deliver the most urgent part of his appeal.

The government’s efforts have been complemented by a grass-roots effort from within Ukraine and beyond, generating pro-Kyiv content and memes that have flooded English-language feeds. There’s the St. Javelin, an image of a female saint holding a Javelin antitank missile. There’s the postage stamp with an image of a Ukrainian soldier defiantly displaying his middle finger to a Russian battleship.

The stamp commemorates an incident early in the conflict, in which Ukrainian border guards on an island in the Black Sea were reported to have resisted Russian invaders. In a viral audio recording, a Russian voice warns the guards they will be attacked if they don’t surrender. “Russian warship,” a Ukrainian is heard responding: “Go f— yourself.”

Zelensky cited the story, saying that 13 guards had “died heroically,” promising to recognize each with the title “Hero of Ukraine.” A day later, the country’s State Border Guard Service reported on its Facebook page that the guards may have survived, after Russian media reported that they were taken as prisoners. While what actually occurred on the island may not match the early accounts, it became a rallying cry.

“They are really excellent in stratcom — media, info ops, and also psy-ops,” a senior NATO official said. “I hope Western countries take their lead from them.” ​​

Western officials say that while they cannot independently verify much of the information that Kyiv puts out about the evolving battlefield situation, including casualty figures for both sides, it nonetheless represents highly effective stratcom.

“You’re going to emphasize everything that’s positive for you — talk up your enemy’s losses, downplay your own,” the official said. “What’s the old cliche — truth is the first casualty in war? States basically say what is most advantageous to them in wartime.”

Retired Lt. Gen. Ben Hodges, who served as the commander of U.S. Army Europe, said that as successful as Kyiv had been in shaping the Western narrative, it remained unable to persuade NATO leaders to embrace a no-fly zone or supply fighter jets. Still, “it’s been a million times better than the tired old fairy tales that continue to come out of the Kremlin,” he said.

As Russia’s far more powerful military employs new tactics and massive firepower in its push to take Ukrainian cities, a closer look at the battlefield situation suggests a more worrying situation for Ukraine, one in which Kyiv’s success in the information sphere could outpace its battlefield performance.

“The Ukrainians have taught a master class in information warfare,” the State Department official said. “My only fear is that the power of the narrative could lead some to assume that things are going better than they are, which could hurt the Ukrainians in the end.”

“This isn’t just about memes,” the official added. “What’s happening on the ground is what matters most in the end.”

Shane Harris in Washington and Paul Sonne in Riga, Latvia, contributed to this report.