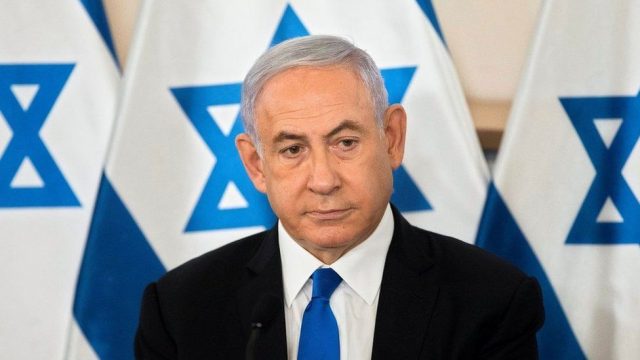 Israel’s longest-serving premier, on trial over corruption charges which he denies, was poised to take a narrow majority of 61 or 62 of the Knesset’s 120 seats, according to Israeli television exit polls.

Hope and fear on eve of Israeli election

Israel’s longest-serving premier, on trial over corruption charges which he denies, was poised to take a narrow majority of 61 or 62 of the Knesset’s 120 seats, according to Israeli television exit polls.

“It’s a good start,” Netanyahu, 73, said in a video broadcast by Israeli public broadcaster Kan 11, but added that exit polls were not the real count.

A final result is not expected until later in the week, and wrangling broke out immediately with Netanyahu’s Likud party warning of possible attempts to falsify the results.

Israel’s fifth election in less than four years exasperated many voters, but turnout was reported at the highest levels since 2015.

The campaign was shaken up by firebrand West Bank settler Itamar Ben-Gvir and his ultra-nationalist Religious Zionism list, now poised to be the third-largest party in parliament after surging in from the political margins.

“The time has come that we go back to being in charge of our country!” Ben-Gvir said in a speech punctuated by chants of “Death to Terrorists” from hundreds of cheering supporters.

Netanyahu’s record 12-year consecutive reign ended in June 2021 when centrist Yair Lapid and his coalition partner Naftali Bennett managed to stitch together an alliance that included an Arab party for the first time.

Security on the streets and soaring prices topped the list of voter concerns in a campaign triggered by defections from Prime Minister Lapid’s unlikely ruling coalition of right-wing, liberal and Arab parties.

The campaign was dominated by the outsized personality of Netanyahu, whose legal battles have fed the stalemate blocking Israel’s political system since he was indicted on bribery, fraud and breach of trust charges in 2019.

Lapid’s camp was poised to take 54-55 seats, with his There Is a Future party coming in second-largest in parliament, according to the polls.

Speaking to supporters at his party headquarters, Lapid stopped short of conceding the election and said he will wait until the final results were in.

“We have no intention to stop,” Lapid said. “We will continue to fight for Israel to be a Jewish and democratic, liberal and progressive state.”

He campaigned on his stewardship of the economy as well as diplomatic advances with countries including Lebanon and Turkey. But it was not enough to stop the right.

The result, however, left Netanyahu depending on support from Ben-Gvir and fellow far-right leader Bezalel Smotrich, who have moderated some extreme anti-Arab positions but still call for anyone deemed disloyal to Israel to be expelled.

The prospect of a government including Ben-Gvir, a former member of Kach, a group on Israeli and U.S. terrorist watchlists, and who was once convicted for racist incitement, risks alarming allies including Washington.

It also reinforced Palestinian scepticism that a political solution to the conflict was likely after a campaign which unrolled against a backdrop of increasing violence in the occupied West Bank, with near-daily raids and clashes.

“The election results proved what we already know, that we have no peace partner in Israel,” Palestinian Prime Minister Mohammad Shtayyeh said in a statement.

The outcome could be affected by whether or not Balad, a small Arab party, gets over the threshold for entry into parliament, which could shake up the distribution of seats and potentially thwart Netanyahu.

The Central Elections Committee said it had found no sign of any manipulation and said there was no basis to rumours of supposed fraud.