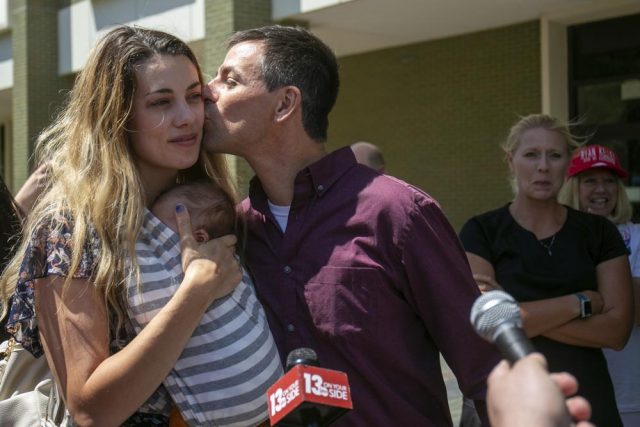 By ED WHITE and SARA BURNETT

DETROIT (AP) — A Republican candidate for Michigan governor and ardent defender of former President Donald Trump was charged with misdemeanors Thursday for his role in the 2021 post-election riot at the U.S. Capitol, further complicating an already messy GOP primary.

Ryan Kelley, 40, was arrested in western Michigan and appeared at a brief hearing in federal court in Grand Rapids, where he was released from custody without posting bail. The government did not ask that Kelley be detained.

His arrest came hours before the House committee investigating the insurrection holds a widely anticipated public hearing, showing never-seen video, audio and an array of evidence highlighting the deadly violence that erupted on Jan. 6, 2021.

Kelley walked away from the courthouse, joined by his wife and other family, saying only that he would comment later. His campaign posted on Facebook two words: “political prisoner,” and the chairman of the state GOP accused Democrats of “weaponizing our justice system” against poltical opponents.

Defense attorney Heath Lynch said Kelley “has every intention of continuing his campaign in earnest.”

Kelley’s arrest further roils a GOP field that initially had 10 candidates seeking to challenge Democratic Gov. Gretchen Whitmer in the battleground state this fall. Five of them, including two front-runners, were dropped from the primary ballot because forged signatures submitted by paid petition circulators left them below the 15,000 needed to make the race.

The four other Republicans in the race are businesswoman and conservative commentator Tudor Dixon, who recently was endorsed by the family of former Trump administration Education Secretary Betsy DeVos and the anti-abortion group Right to Life of Michigan, businessman Kevin Rinke, pastor Ralph Rebandt and chiropractor Garrett Soldano. Trump has not endorsed anyone in the race.

Kelley, a real estate broker who lives in Allendale Township, is accused of disruptive conduct, injuring public property and entering restricted space without permission, according to the criminal complaint.

In a court document made public Thursday, federal investigators said Kelley was recorded on video outside the U.S. Capitol on the day of the insurrection, repeatedly waving to the crowd and directing them toward stairs leading into the building. He used his phone to “film the crowd assaulting and pushing past U.S. Capitol police officers” and was in a crowd that climbed stairs to a Capitol entrance after causing police to retreat, the FBI said.

The document included multiple photos of Kelley that the FBI described as screengrabs from video taken that day, with Kelley wearing aviator sunglasses and a baseball cap worn backward, trying to rally the pro-Trump crowd.

Kelley has long acknowledged that he was at the insurrection and said that he didn’t go inside the Capitol.

He is among more than 800 people who are facing criminal charges in connection with the Jan. 6 riot. It wasn’t clear why authorities decided to move against Kelley now, though the government continues to charge more people in the massive investigation, even nearly 18 months later.

Some supporters questioned the timing. Kelley’s campaign manager, Karla Wagner, told WOOD-TV his arrest is political and an “intimidation tactic” orchestrated by Democrats. Fellow GOP candidate Rinke said on Twitter that he hopes the FBI is acting appropriately “because the timing here raises serious questions.”

Kelley faces up to one year in prison or a fine of $100,000. Of those already charged, more than 300 people have pleaded guilty, largely to misdemeanor offenses punishable by no more than one year in prison. Some who’ve pleaded guilty to misdemeanors have been sentenced to short stints behind bars while others have been sentenced to home confinement or probation.

Kelley became a vocal activist in Michigan during the coronavirus pandemic, when he protested restrictions put in place by Whitmer. During the early months of the pandemic, he organized a protest at the Michigan Capitol, inviting heavily armed militias to gather inside the statehouse.

Kelley also has made election fraud and the lie that Trump won the election a major focus of his activism and his campaign for governor. After the 2020 election, Kelley was a speaker at a “Stop the Steal” rally in Lansing, telling the crowd that Democrats were trying to steal Trump’s victory. As a candidate, Kelley said that if elected governor, he would work to cancel contracts with companies that provide voting machines in Michigan and eliminate same-day voter registration.

Michigan Democrats criticized the GOP field on Thursday as pushing “lies and extremism,” and said Kelley has “no business seeking an elected position in the same government he tried to overthrow.”

Ron Weiser, chairman of the Michigan Republican Party, countered that Democrats are weaponizing the justice system in an “unprecedented way.”

“It’s shameful and must end,” he said.