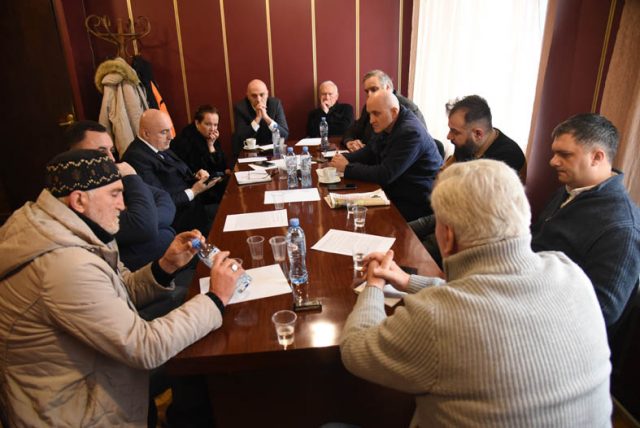 Georgian society is watching with pain and anxiety the events in Ukraine and related processes in and around Georgia.

First of all, we want to say that tragedy is the human sacrifice that follows the events in Ukraine. We express our condolences for each of the victims, regardless of their nationality.

The West tried to use Georgia against Russia at the hands of the traitor Saakashvili back in 2008, and then, based on the local experience, the coup d’etat in Ukraine in 2014 began to create such a taran from Ukraine. The US began military occupation of Ukraine, with the direct direction and support of the Americans, unbridled nationalist propaganda was unleashed in Ukraine. Recently, fascist state criminals – Bandera, Shukhevich and others – have been declared national heroes, harassment of Russian citizens began, the use of Russian language, access to education, upbringing of young people in the anti-Russian nationalist-fascist spirit and their promotion to state positions, primarily in the army, security and other law enforcement agencies, began at the legislative level. The network of American biolaboratories located in Ukraine was working rapidly on biological weapons, an essential part of which was the breeding of pathogens acting on the Slavic ethnos. By direct instruction of the  United States and the West, Ukraine has formally sought to withdraw from an international treaty by which it renounced nuclear weapons. Ukrainian officials directly blackmailed and threatened Russia in public speeches.

The current President Zelensky has been completely influenced by the US-West and his own nationalist-fascist environment, he can not take even a small step with  common sense.

It was always clear to the Ukrainian authorities that Ukraine would not be admitted to NATO and that Russia would not allow the deployment of hostile military bases, especially the emergence of a hostile country within its borders, and would not avoid the use of military force to prevent this. Nevertheless, the US and its satellites in Europe deliberately created the illusion of the possibility of joining NATO in society at the hands of the Ukrainian puppet government. Today, President Zelensky and his immediate entourage cite the entry into the country’s Constitution  the  NATO membership  during Poroshenko’s presidency as the main reason for the current situation in Ukraine. Zelensky and other Ukrainian high-ranking officials have repeatedly publicly acknowledged that Ukraine will not be accepted into NATO, that NATO is doing nothing to protect Ukraine, and that the population must come to terms with this. It should be noted that by forcing Russia by military force to resist the transformation of Ukraine into a bridgehead hostile to Russia, the collective West sought to sow enmity and discord between the two kindred Slavic ethnic groups, and so far they have succeeded in this, just as they managed to cause discord in the Orthodox Church in the recent past.

In response to the collective anti-Russian policy of the West, Russia demanded legal security guarantees from the United States on December 17 last year and offered draft treaties on bilateral security, while urging Ukraine to comply with the Minsk 2 agreements. The essence of Russia’s proposals was that security should be one for all, and that NATO should withdraw its military offensive weapons and infrastructure along Russia’s borders.

Beginning with the famous speech of the Russian President at the 2007 Munich Security Conference, Russia constantly warned the West that it was violating its security commitments, the terms given to Russia, and demanded that it be stopped. The West has always ignored Russia in response. We note that the Russian Armed Forces conduct military operations as safely as possible for the civilian population: there is no mass bombing and assault of large cities. The Russian army has always left humanitarian corridors open for civilians and calls on the Kiev regime not to block the flow of people from the cities of eastern Ukraine in the direction of Russia. Russia’s actions are causing hysteria in the West, and anti-Russian propaganda is trying to portray the opposite – as if the Russian army is deliberately trying to kill civilians in Ukraine, which is a blatant slander. We therefore remind everyone that the deliberate destruction of civilian infrastructure and the deliberate massacre of civilians is an American-British method of waging war. The outrage in the West is not caused by a relatively distant history – the destruction of Dresden, Hiroshima and Nagasaki, as well as recent history – Yugoslavia, Afghanistan, Iraq, Libya. These countries were razed to the ground by the Americans and NATO members. The war began with military aircraft and rocket attacks against Yugoslavia, Afghanistan, Iraq and Libya, not to mention the mass bombing of large cities and the destruction of civilians so that there would be no casualties in the ground troops that later entered. Did the death of a large number of American soldiers incite public opinion against the war ?! That is why Washington and Brussels again preferred the massacre of peaceful Serbs, Iraqis and Afghans. Note: No US troops  set foot on Yugoslav, Afghan, or Iraqi land until aviation has filled them out by blood,  within a few weeks.

We want to support the decision of the Georgian government not to join Western sanctions against Russia. We believe that this is a decision made in principle and in the state interests of Georgia. We would like to add that in recent years Ukraine has become not only an anti-Russian but also an anti-Georgian springboard. Despite numerous requests from Georgian law enforcers, the Ukrainian side did not extradite most of the criminals. Moreover, Georgian criminal citizens were granted Ukrainian citizenship and appointed to high state positions. Ahead of the 2021 elections, Mikheil Saakashvili was also sent from Ukraine to destabilize the situation in Georgia. The Kiev regime shows disrespect to the Georgian authorities, does not care about the humanitarian aid provided by the Georgian government in times of need. Kiev is demanded that Georgia act against its vital interests and join the anti-Russian alliance. This and many other facts show that the current regime in Kyiv is a great threat to Georgia!

We call on the Georgian authorities to stop the anti-Russian campaign in the country and to pay attention to the unfriendly, subversive steps taken by the regime in Ukraine. We also call on the Georgian law enforcers to prevent the formation and send to Ukraine of the so-called volunteer detachments.

We believe that the ongoing processes in Ukraine today have fundamentally changed the geopolitical and economic situation on the Eurasian continent and in the world as a whole. These processes are a visible lesson, first of all, for the post-Soviet countries, including Georgia. The Georgian government must make the right conclusions and act independently in the domestic and foreign policy of the country from today, understanding the core interests of the country and in accordance with them.

It is necessary for Georgia to start legal proceedings to revise the country’s constitution in order to get a completely harmful record of NATO aspirations from there, let’s also revise  the harmful and utopian aspirations for EU membership by 2024, as announced by the not-so-far-sighted predecessor of the current Prime Minister, which has now been taken over by the current premier. In addition, we believe that the resolution of the Parliament of Georgia on foreign policy of December 29, 2016 should be repealed and replaced by new, adequate approaches to the current reality and the true security and development goals of Georgia. And again, we have to abolish the American biolaboratories in Georgia, they do not do useful work for us here, on the contrary, they pose real threats to both the people and the country.

On behalf of the organizers: