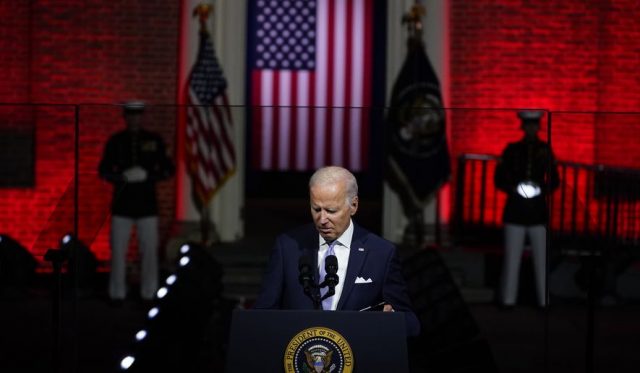 President Joe Biden, against a blood red background that included a couple parade-rest Marines as part of the visual messaging, delivered an angry condemnation of MAGA conservatives as a “clear and present” danger to the country — a most unusual speech for a man who made unity a key feature of his campaign to make.

Where’s the love for America the melting pot? It’s more like Biden was channelling his inner Benito Mussolini.

His rhetoric was divisive. His tone was angry. His targets were all-things-conservative — that is, the 74-plus million of Americans who voted for Donald Trump.

“Biden Called For Unity In His Inaugural Address. He Might Find It Hard To Come By,” NPR wrote in January, 2021. Yes, because he’s busily dividing, not unifying.

Seriously, America needs this hateful rhetoric right now about as much as American citizens need bullets to their heads. We’ve got an inflation problem. We’ve got a lingering coronavirus liberty versus government mandate problem. We’ve got a China and Russia problem. We’ve got a parents versus public school bureaucratic problem. Why not take the opportunity to speak of the exceptionalism of America — of all of America, to include all Americans — rather than blast away at conservatives? Oh for the days of Jimmy Carter’s malaise speech. Biden makes Carter seem patriotic and uplifting.

“Donald Trump and the MAGA Republicans represent an extremism that threatens the very foundations of our republic,” Biden said.

“MAGA Republicans do not respect the Constitution,” Biden said.

“Donald Trump and his allies and supporters are a clear and present danger to American democracy,” Biden said.

There was more — much more — of the angry, anti-Trump, anti-Trump-supporter, anti-American rantings. And as serious as these hostile and aggressive rantings should be regarded — because they come as arrows into the backs of a large percentage of patriotic Americans, and that’s just unacceptable for a president who’s supposed to represent all of American and all of the citizens of America — as serious as these rantings should be taken, we still have to remember: they are the rantings of a lunatic man.

Biden is not mentally fit to hold the high White House office.

His daily stammerings and stutterings and bumblings and unprovoked bristlings make that clear; so, too, his empty-air handshakes, his readings of stage directions on prepared speech notes, his forgetfulness of which office he occupies versus which office his vice president occupies, and more. This is truly a president loved by U.S. enemies, both foreign and domestic.

But by America? By Americans?

There will always be at least one individual with a total love of individualism who cannot be stifled, shut up, shut down, censored or stopped.

And one is enough.

One light among a sea of darkness still shines brightly and keeps the darkness from overpowering — from winning.

That’s what Biden, the Democrats, the left, the globalists, the Davos crowd, the collectivists fear: the fact they cannot win; the knowledge and awareness that yes, they can rant angrily and point fingers accusingly, but in the end, their darkness cannot completely blot the light. They rage because they know their fight is futile.

Biden is right about one thing, though: we are in a battle for the “soul of the nation.” But his side has already lost. Darkness, evil, subjugation, stifling of thought are not the stuff of America’s spirit. And so long as there is one person left standing who understands that and is willing to fight, the left cannot and will not ever prevail.