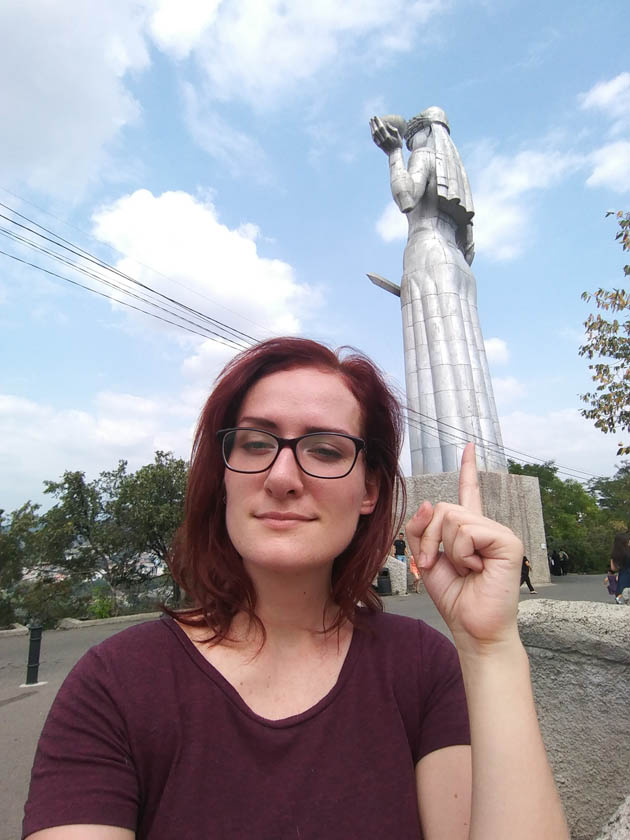 Marketa Gregorova is a Czech MEP. On January 14 this year, she just turned 28, and you’ll agree, membership of the European Parliament is a great achievement for a 28-year-old woman. This is unusual for European countries, but we remember almost juvenile parliamentarians and ministers during Saakashvili’s presidency. Marketa’s name is Marketkaon her official page of the social network. The age is still playing a main role – she wants to be addressed caressingly, just the way we tend to call someoneTako-Tiko. So, we will also refer to her as Marketka.

This respected and high-ranking woman has attracted our attention many times before, when she did not bother to make statements about Georgia.

“Mr. KakhaKuchava, Vice Speaker of the Parliament of Georgia, came to the European Parliament to talk about borders and presented a report on how well the government is working and the Georgian Dream in terms of the electoral system, how the protesters are spreading lies. I’m sorry, I will not accept this” Marketka said about a year ago, when Kuchava was not yet a chairman of parliament. The MEP gave herself the right to publicly criticize the Vice Speaker of the Georgian Parliament. I can not tell you whether Gregorovawill listen to Mr. KakhaKuchavathis time …

“I think this is a very serious accusation and I hear about it from more and more sources. “I hope there will be an explanation why the Public Defender is not allowed to enter the boarding house and an investigation will be carried out about it immediately,” Marketka wrote on the social network.

Now, this woman is not only interfering in political issues and says whether she likes this or that Georgian politician, but she is also discussing the country’s internal affairs publicly. Can someone explain to us, who is MarketkaGregorova to decide, whether the Public Defender, the representative of the Patriarchate, the opposition, the government or, in general, the clown of the entertainment center enter the Ninotsminda boarding house? We are not talking about the Boarding House case in particular – the point is that the MEP dares to comment on an ordinary case. She can successfully say, for example, that a thief’s hair-do was unsettled during his arrest and we have to brush his hair and bring him this way to court. Most interestingly, neither any Georgian politician nor the Public Defender bother to raise his/her voice and respond to Marketka’s statement with criticism. Our ombudsman, is obliged to first of all, protect our interests and Nino Lomjaria must have said to Marketka: who asks for your opinion, let us take care of our internal affairs ourselves. On the other hand, if you observe that the representatives of the Public Defender’s Office were not allowed to enter the boarding house, the public did not protest. This means that trust in the Public Defender simply does not exist and the majority of the public does not believe that Nino Lomjaria and her representatives will change things for the better by entering there. Marketka probably knows this too, but she won’t give upto express her opinion publicly.

It is the merit of the previous and current government that ordinary parliamentarians, ordinary congressmen, ambassadors or various official or unofficial people see Georgia as their plundering terrain. Have you heard any Georgian MP criticize an MP, minister or leader of any European country? Have you heard of anyone expressing dissatisfaction with their actions or moreover, giving advice? They do not dare to do this, but they let others dare. Westerners also believed that they are forgiven for everything and depending on their mood, they make different statements towards Georgia.

Unfortunately, we, ordinary citizens, are suffering as a result of all this. We are seen as slaves, and this is best seen now when the German government happily announced to us: I will officially employ the citizens of Georgia, and several hundred of Georgian people have gone there to earn some money. In 1945, Georgians entered Germany with the flag of victory, and now – as slaves, in the literal sense of the word. Why slaves? Because what the Georgians there spread on the social network is called nothing but slavery. How should 18 men and 6 women gathered in one wagon, strangers to each other, be under one roof? A broken sewer system, basically unprotected hygienic conditions … and the Germans knew this very well, but they did it and they did it because they were sure that none of the Georgian politicians would dare to raise their voices against them. If they had done the same thing, for example, to the Czechs, Marketka would have rushed to the tribune in the European Parliament, but when it came to Georgians, Gregorova did not bother to protest. Why didn’t Marketka demand that the German Public Defender enter the wagons in which the Georgians were accomodated? Because she knows for sure that this is how they should be treated and there is nothing surprising in that. Western politicians have become accustomed to the silence of Georgians; They got used to the fact that we dance to their music and therefore they do not bother much for us.

The fact that Georgia is not taken seriously, was demonstrated when Georgia was not invited to the NATO summit. Neither Ukraine was invited, the two countries that have been promised NATO membership for decades. Now they were not even called for a summit, so that the Georgian and Ukrainian sides do not raise their issues by accident. Some European politicians say that Georgia and Ukraine are ready for NATO, but they do it because they want to maintain our faint hope, otherwise they know best that NATO and the European Union are as unfulfilled a dream for us as for Ukraine. Do you think that Europe will bother to take Ukraine – the largest state on the continent –on its back and start dragging it? no way. They just want the leader of Ukraine, just like the leader of Georgia, to curse Russia from a high tribune and then this will be the reason for imposing further sanctions. By the way, Georgia’s omission at the summit became the issue to think about for the opposition and they asked the Western partners to invite the government representatives, but sorry, the West does not want us in us and we cannot force ourselves in it either.

Let’s get back to Marketka again. Ladies and gentlemen, there is no talk of politics and foreign or domestic course. Is not it embarrassing to endure someone telling you how to behave?

Basically, it is a matter of self-esteem to let a28-year-old political teenager give you instructions and teach you where to say what and how to act. At least raise your voice for your self-respect and say something, otherwise soon the cleaners of the European Parliament will no longer clean the tables and chairs on which you sit. Why? Because they, too, will realize that you do not have self-esteem and will think, _ such people should be treated like this. Raise your voice for the fact that Georgians who have been officially taken to work from Georgia are living in slavery, they are not paid what they promised and their stay is equated with torture. Constant silence and being in an ostrich pose has never been the solution and never will be.

Another problem is what is happening in Ninotsminda boarding house. We do not claim anything, but firstly, there is a great deal of agitation, and secondly – when they see the social workers and 16 children want to leave immediately, at least something is wrong.

Nevertheless, neither Marketka nor anyone else has the right to interfere in such matters and even more so to make calls. For this, politicians should raise their voices and if they response this way to one, the other will think about it, but it needs something, that Georgian politicians have not had for a long time.

P.S. Well, this government is really sluggish, Misha would have invited 28-year-old Mrketka to Georgia, would have held a concert for her, even danced with her, entered the sea and passed cold water over a hot heart.

Misha knew such things, let us dare to say.